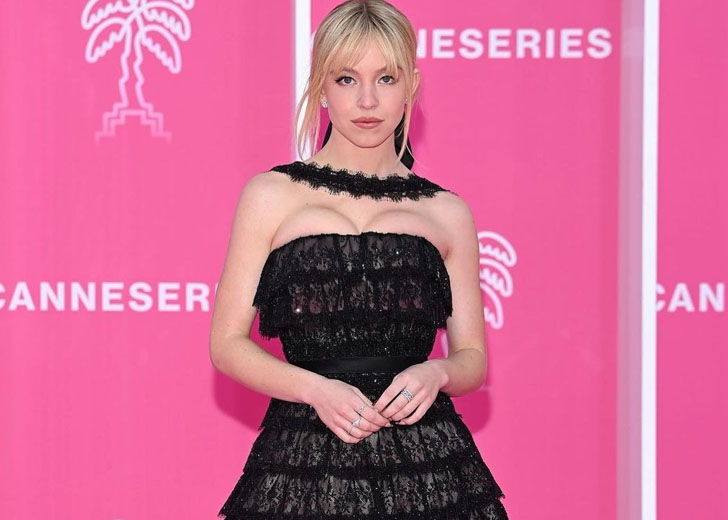 Everything about Sydney Sweeney’s boob job and plastic surgery rumors!

Sydney Sweeney is a talented American actress who came to the height of her career after portraying the role of Cassie Howard in HBO Max’s critically acclaimed drama Euphoria. She has been playing the role since the show’s initiation in 2020.

She gave an amazing performance and allured the audience through her portrayal of a teenage character in the show. Cassie in Euphoria has a lot of sexual shenanigans and goes through a lot of relationship trauma.

Speaking more about the show, it deals with different sets of grief, emotional drama, drugs, sex, sexuality, and violence. It also has a lot of nudity, and some prying eyes were keen enough to notice Sweeney’s physical appearance.

Does Sydney Sweeney have a breast implant?

One of the other reasons the topic of Sweeney possibly having a boob job started gaining hype was when she became an ambassador for Rihanna‘s Savage x Fenty underwear line.

She became an ambassador on June 22, 2020. On the same day, she announced the news via Instagram by sharing a picture of herself donning an outfit from the underwear line.

Following that, she shared more pictures to advertise more of her involvement in the underwear line. And those pictures also showed her physical beauty, including her breasts.

So, coming back to the topic: Does Sweeney have a breast implant? Did she undergo a boob job?

The answer to that question remains unknown to this date. Similarly, Sweeney hasn’t confirmed or denied these speculations. Again, however, it’s highly unlikely that she has a breast implant.

In October 2021, The White Lotus actress was featured on the cover of Wonderland Magazine’s Fall 2021 Issue.

In her feature, she candidly talked about several things. First, she was asked what the biggest misconception about her in the media was at one point.

At first, she didn’t exactly say it as she was on an 18-hour road trip with her father, Scott Sweeney. “I’m trying to work out how to word it because I know exactly what I want to say, but I’m sitting in the car with my dad right now,” she laughingly said.

But, after that, she mustered the courage and said, “Okay, it’s that I have big boobs, I’m blonde, and that’s all I have.”

In the same interview, she had also talked about pursuing a career in other fields of the entertainment industry while also being an actress. Some of the areas she was interested in exploring were writing, directing, or entertainment law.

Sydney Sweeney is proud of her work in ‘Euphoria’

In June 2019, Sweeney, whose height is 5 feet 3½ inches (1.61 meters), shared a lot of insight on her works in Euphoria during a conversation with HuffPost in a Build Series interview.

She first mentioned that she was initially nervous and hesitant when it was time to shoot her nude scenes. She even had a long conversation with her mother, Lisa Mudd Sweeney, on the same topic.

However, she eventually did the job and told HuffPost that she was very proud of her work on a project that wasn’t afraid to go to that limit to tell the stories truthfully. “The thing about the nudity in this show is that it’s not glamorized. It’s not, ‘Oh, here’s a pair of tits.’ It’s just real.”

“I had to look at the whole picture of the entirety of the show, and I just fell in love with the rawness and the situations and the emotions that all these characters go through.”

She continued, “I always tend to find things that scare me and there hasn’t been a TV show that has really represented a real look at growing up today, and I wanted to be a part of something like that.”

Furthermore, she stated that she fell in love with the arc of her character Cassie. She said, “If many people would read the page, you’d see the stereotypical blonde, sexual, popular, teenage girl. But really, there’s so many layers to her and she’s gone through so much.”

Another raising question among the public is if the 24-year-old Spokane, Washington native has gone through plastic surgery.

The plastic surgery talks were initiated after fans saw some differences in Sweeney’s before and after pictures. The notable changes that fans noticed were: 1) Loss of facial fat. 2) A subtle facelift. 3) Little change in her nose, possibly due to a nose job.

A collage of Sydney Sweeney’s before and after pictures (Photo: Weight & Skin)

The answer to all of these questions is still unknown. Sweeney hasn’t talked about going through plastic surgery, and without an official confirmation, nothing much could be said about it.

Thus, this gossip remains limited to rumors only – just like the talks of her having a boob job. Nonetheless, given how deadly plastic surgery or a boob job can prove to be, it doesn’t seem like Sweeney would take such a high risk.

It could only be said that she glamours her fans with her natural looks, which is enough. Furthermore, on Euphoria, her character looks even more appealing due to the incredible art of makeup.