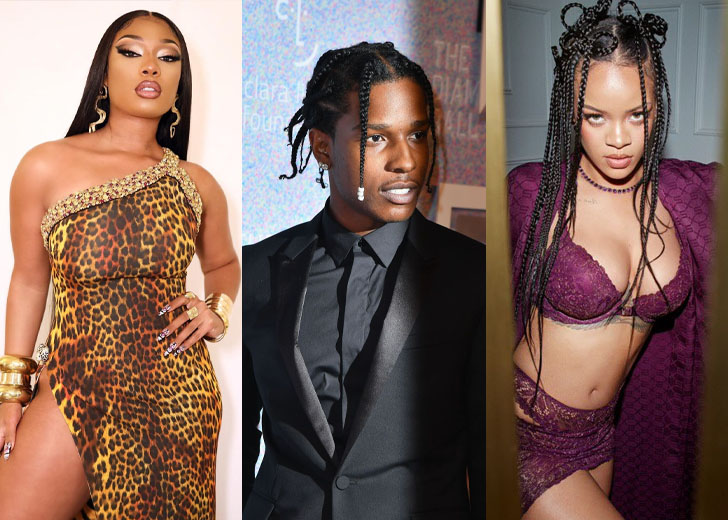 Learn everything about the ongoing drama!

It has been quite the week for the fans of Rihanna, her boyfriend ASAP Rocky, and American rapper Megan Thee Stallion.

Everything started when the global star and soon-to-be mother unfollowed Stallion on Instagram due to some unknown reasons.

The news came as a shock for the fans of the two as they had previously expressed their deep desires to work/collaborate alongside each other – mainly Stallion.

Besides, Rihanna had also praised Stallion after following her on Instagram in 2019 and even appointing Stallion as the brand ambassador of her lingerie brand named Savage X Fenty.

After that happened, Stallion did several photoshoots and posed for the lingerie brand. Fast forward to the present time, eagle-eyed fans have noticed that Stallion’s pictures are no longer featured on the website of Savage X Fenty and the Barbadian singer no longer follows Stallion on Instagram.

As for where A$AP Rocky comes in between this drama, rumors suggest that all of it started after Rocky cheated on Rihanna with Stallion. Here is everything we know about the drama!

Did ASAP Rocky cheat on Rihanna With Megan Thee Stallion?

The news of the rumored cheating scandal first came out from the gossip blog Crazy Days and Nights.

The blog has the feature of a blind item that lets people share an anonymous tip about anything. And one person had shared a blind item on March 16, 2022, that read, “The very fast rapper cheated on his much-higher-on-the-list significant other with a three-named rapper.”

This led many to assume that the people mentioned in the list are Rocky – the very fast rapper; Rihanna – the much-higher-on-the-list significant other; and Stallion – the three-named rapper as her stage name is Meg.

Additionally, Global Times previously reported that a source had told them Rihanna has “long been uncomfortable” around Rocky due to “some perceived past flirtation” between Rocky and Stallion.

However, on the other hand, Hollywood Life reported on March 21, 2022, that Rihanna and Rocky’s relationship had made severe progress and they might even get engaged sometime soon.

Coming back to the cheating scandal, it is yet to be confirmed by anyone. And until that happens, the rumors must only be taken as nothing else but a grain of salt.

Rihanna isn’t the only big celebrity that has unfollowed Stallion in the past few weeks. Stars like Nicki Minaj, Drake, Teyana Taylor, and others have joined the list of people who have unfollowed the rapper on the photo-sharing platform.

As of now, there is no official confirmation as to what led these celebrities to unfollow Stallion on Instagram. However, there are some rumors. One speculation suggests that it might have something with Stallion’s tragic incident with Tory Lanez.

The incident was a huge argument that happened on July 12, 2020, right outside of Kylie Jenner’s house party, which resulted in Lanez allegedly shooting Stallion in the foot. The case about it is still ongoing, and nothing much can be said now.

Similarly, some believe celebs unfollowed Stallion due to her personality. One Twitter user wrote, “Meg stay in a lot of drama with [people] and labels. She is the only one who is consistently having this issue. She is clearly the problem.”

Speaking of her drama with people and labels, which also links with the above-mentioned cheating scandal, Stallion has been in a legal and online feud with Carl Crawford since 2020. Crawford is the CEO of the label 1501 Certified Ent.

The issue went back and forth, with the label counter suing the rapper. Later, both the parties involved took their feud online. Stallion even went on to call Crawford a “powerhead.”

Additionally, she had talked many things about him and clarified that she never wanted to take the matter online. However, she was forced to do so as she was painted as the bad guy in the whole affair.

In reply to all those insults and things said by Stallion, Crawford mentioned that all of the things she said were a lie and the truth would eventually come out.

He even went as far as to say, “This is coming from a bona fide alcoholic who [slept with] the whole industry, including her best friend’s [boyfriend].”

This statement from Crawford came in handy after Rihanna unfollowed Stallion. Many assumed that Crawford was talking about Rocky cheating on Rihanna with Stallion.

But, as said earlier, nothing about the topic is confirmed yet. So, let’s hope there will be further developments in the matter.