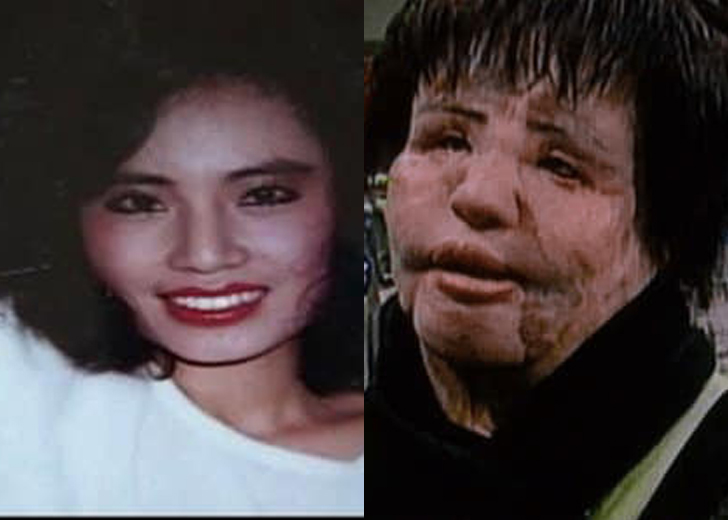 Hang Mioku made plastic surgery her obsession but got left with a wholly disfigured face in the overhaul.

Hang Mioku, born on July 8, 1963, is a former Korean model and singer who became obsessed with plastic surgery to the extent that she desperately injected cooking oil on her face.

But her obsession could only damage her face, so much so that even her parents couldn’t recognize her.

Since ruining her face, Mioku, who used to be a highly commended face in the Korean entertainment industry for her modeling and singing attributes, finds it difficult to walk hand-in-hand with the present world.

What Is Hang Mioku Doing Now?

Mioku is currently in her late fifties and thankfully, still alive and healthy. But she passes her each day with regret cursing her obsession for procedures and plastic surgeries.

That being said, she works at a recycled clothing store called The Beautiful Shop for her living, Dailymail reports.

Mioku Became Addicted Towards Plastic Surgery since the Age of 28

Mioku’s old pictures suggest that she had bright eyes, a gorgeous smile, and most importantly, flawless skin. But that changed when she became obsessed with the idea of enhancing her natural beauty.

She underwent her first plastic surgery when she was 28 years old and the first time result was a satisfactory one for her. That made her greedy to get more surgeries and led her to undergo the procedure a few more times on her face.

Obsessed with it, he wanted to go for more surgeries to obtain smoother skin, and look more beautiful. But the doctors objected to her and warned her of the high risk that continuous plastic surgery can cause her.

The doctors even refused to perform any further surgery on her, stating her face would become more subjugate if she got injected through silicone injections one more time.

But Mioku was stubborn and didn’t listen to the doctors. Therefore, she started to practice plastic surgery on herself all by herself.

She initially injected a bottle of market silicone on her face. Since silicone was very expensive, she decided to inject cooking oil on her face. And that was one decision that damaged her life completely, for all worse reasons.

Afterward, her cheeks and forehead became swollen and scarred because the cooking oil didn’t support the plastic surgery process as she had planned.

Slowly, it damaged Mioku’s to the extent that even her parents couldn’t recognize her. Later, it was also disclosed that she had some psychological disorder due to which she kept taking life-ruining decisions.

People Supported Her Emotionally and Financially

After she damaged her face and struggled to live, her story was shown on a Korean television show through which thousands of people showed their concern and donated money for her to receive corrective surgery.

With the wishes and financial support, she went through a recovery surgery and underwent 10 operations. Through those operations, doctors removed 60 grams of silicone, oil, and other foreign substances from her face, and 200 grams from her neck.

Moral of the story: triggering with the natural beauty, operations, or plastic surgeries are not always beneficial.

Posted on September 16, 2021September 17, 2021
Brett Ambler is an internet personality and an actor who is mostly known by the name ‘The Kazoo Kid.’ He got the limelight in...
Read More