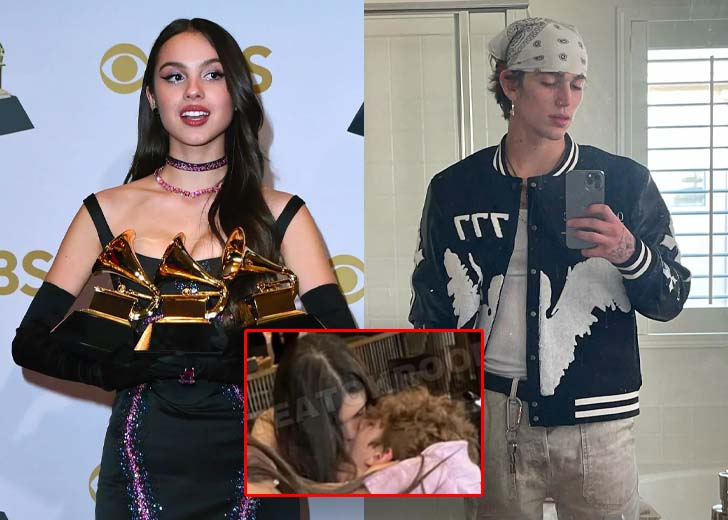 Recently a picture has been circulating on the internet, what appears to be Olivia Rodrigo and Vinnie Hacker sharing an intimate kiss. However, their faces are not properly seen.

And that has divided the fans into two parts — one who thinks they are Rodrigo and Hacker in the picture, while the other half defends that the people in the picture are not them and it is all fake.

While it can’t be exactly said if the couple kissing in the image are Rodrigo and Hacker, it has undoubtedly re-sparked their dating rumor.

So here’s everything related to their dating life, rumors, and history.

Vinnie Hacker was seen in one of Olivia Rodrigo’s concert

Hacker was first spotted at Rodrigo’s Los Angeles performance in May 2022, sparking rumors of a romance between the two.

At the time, a photo obtained by E! News showed the High School Musical: The Musical: The Series star embracing in what seemed to be a less-than-friendly hug before getting into a car and driving away.

After seeing the photos, fans quickly wondered whether the two were more than just friends. While Rodrigo has remained silent on the claims, Hacker appears to have addressed them in a TikTok remark.

One of the fans commented on the influencer’s video he shared about his dating life, “Olivia?” Vinnie responded quickly. He replied “No” with a sobbing emoji.

During a June 2022 episode of the Barstool Sports’ BFFs podcast, fellow internet personality Josh Richards stepped in to clarify the air. He tried to shed some light on the subject when his co-host Dave Portnoy questioned if the rumors were accurate.

Rodrigo and Hacker’s relationship rumors surfaced just a month after she was linked to Zack Bia. However, it’s unclear what really happened between them.

She formerly dated music producer Adam Faze from June 2021 until their breakup in February 2022. Fans have also believed for years that she had a secret offscreen affair with HSMTMTS actor Joshua Bassett, who is said to be the basis for her first hit, ‘Drivers License.’

Rodrigo was in a relationship with her Bizaardvark co-star Ethan Wacker in the early days of her career. They were married from July 2018 to August 2019.

And at present, Rodrigo is also linked to dating her supposed new boyfriend, Elijah Hewson.

Vinnie Hacker was rumored to be dating Billie Eilish

TikTok star Hacker has also been linked to a few people. He was rumored to be dating Billie Eilish after she reportedly broke up with her ex-boyfriend Matthew Tyler Vorce.

According to Hollywood Mask, one of his followers who hung out with Hacker confirmed that Vinnie and the singer had a “low-key fling.”

However, non have spoken on the matter, so it can’t be said for sure.

Similarly, several relationship rumors are circulating about Hacker, and the TikToker has been linked to many celebrities, including Reneta Ri and Nikita Dragun.

Posted on November 10, 2022November 10, 2022
According to Nikita Dragun's representative, she was kept in a male-only unit while at the Miami-based Turner Guilford Knight Correctional Center.
Read More