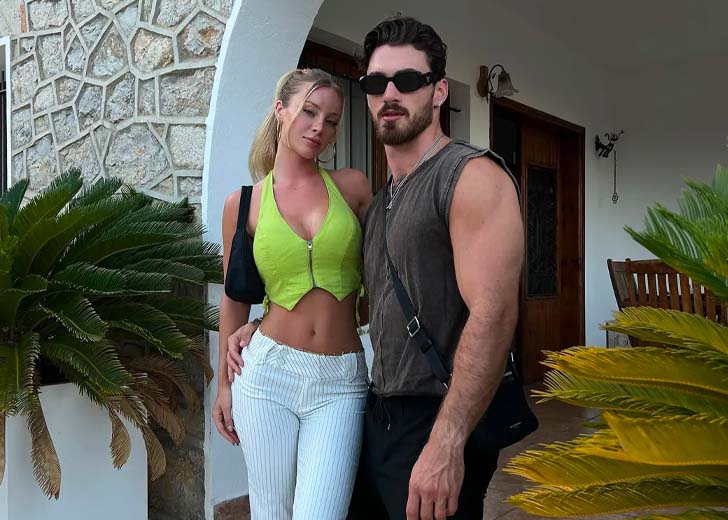 “…not to mention the sexiest man I know,” Daisy Keech wrote about her boyfriend, Michael Yerger.

Daisy Keech and her boyfriend, Michael Yerger, are head over heels in love with each other. And their love for each other led them to get matching tattoos recently.

Earlier this week, Yerger, a former contestant from Survivor: Ghost Island, took to Instagram to post a couple of alluring pictures of himself and Keech. While doing that, he showed that he and his girlfriend had inked matching tattoos around their pubic region.

The post immediately received a lot of attention from the fans of Keech and Yerger. Many even dropped some interesting comments, praising the chemistry between the couple.

“Why are y’all so hot…dang this was everything and more that I needed,” someone wrote.

Another added, “Imma taking screenshot so i be show this to my gf when i make one.”

A user also asked the meanings behind their tattoos, writing, “What does That Symbol stand for?”

For those who are still curious to know the meanings behind their matching tattoos, a deep look into it shows that they have inked the initials of each other’s names.

So, Yerger has inked “DK,” while Keech has tattooed “MY.”

Just last week, Keech also dedicated her Instagram post to her boyfriend Yerger, as she posted some pictures of the couple along with a beautifully written caption. She made the post marking the reality star’s birthday.

“Happy birthday to the kindest, funniest, most patient, happiest, goofiest, intelligent, honest, confident, greatest friend and not to mention the sexiest man I know & that’s alive,” she wrote.

The diva continued her long caption, penning, “For so long I was trying to figure out what the catch was bc how can a man I met in LA possess all of these qualities, but there isn’t one… You’re an anomaly. Thank you for cracking my hard shell & showing me how to love.”

“you have made such an impact on everyone’s lives that you have touched. Happy birthday, bestie & lover,” she concluded.

And while Keech and her boyfriend Yerger have been enjoying their relationship, they also faced some backlash from none other than Nikita Dragun back in June 2020.

The YouTube star seemingly threw some shade at the TikTok star after she went Instagram official with Yerger. Dragun apparently did that because Yerger was once in a relationship with her, too.

“I ain’t even mad when I see my ex with another girl… Like, [you about] to be just as embarrassed as I was when [you] find out what he’s really about,” the social media star tweeted.

The couple Keech and Yerger were also quick to react to Dragun’s tweet. First, the model tweeted, “You still love using that word ‘ex.’ Lmfao it’s been far too long to keep bugging about an old hoax. Wish you the best Nikita.”

Sometime later, Keech also tweeted, asking the fellow internet star to forget the past and move on. She wrote, “Nikita, whatever happened is in the past. There’s no need to tear others down. I hope you can move on and be happy. We truly wish you the best.”

Since then, Keech and Yerger have continued to show their love for each other on social media while avoiding all the negativity going around them.