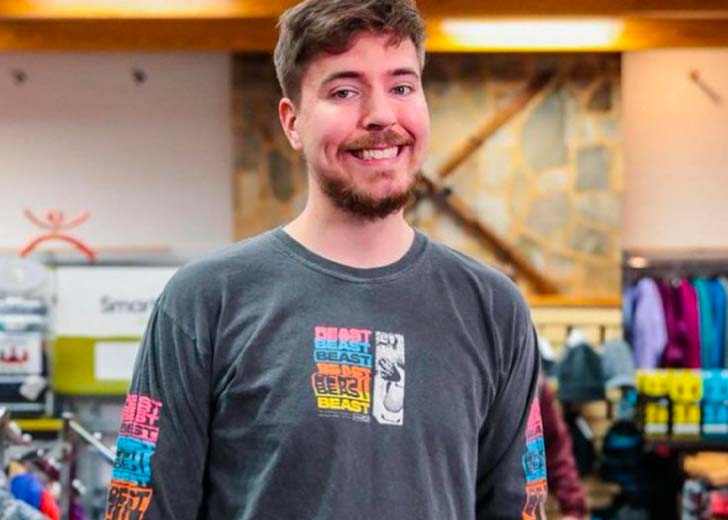 MrBeast, aka Jimmy Donaldson, seems to have a new girlfriend!

On Tuesday, July 26, 2022, the popular YouTube creator took to one of his side channels, Beast Reacts, to upload a video where he and Chris Tyson reacted to some of the world’s “Most Expensive Hotel Room!”

While reacting to a small floating hotel costing $728 per night, MrBeast revealed his new girlfriend, whose name is Tia. He said, “This looks like it’ll be so much fun to go to, though. I want to take Tia to one of these.”

When MrBeast said he might take Tia to the place, Tyson came in the middle and said, “or me,” as in telling MrBeast to take him to those places. But MrBeast was consistent in taking Tia to those places.

In addition, in the following sentence he said, he established that Tia is his girlfriend. MrBeast said, “I’ll take my girlfriend.” “We could fish off of it, bro,” Tyson added, to which MrBeast replied, “You’re right. Me and Tia could go fishing.”

Tyson had the last laugh in the conversation as he said, “You can’t bro fish with your girl bro.” After that, the two friends reacted to more expensive hotels, and the topic of MrBeast’s girlfriend never came up again in the video.

Besides this small detail, there is little to no information about MrBeast’s new girlfriend. He has yet to provide hints about his new relationship through his social media handles. And there is no one with the name of Tia on his Instagram following list.

Considering all of it, it only seems perfect to assume that YouTube’s most popular creator is keeping his newfound love hidden behind the curtains until he deems it perfect for sharing with the world. For now, his fans must wait for that ideal time to arrive.

Before MrBeast confirmed that he had a new girlfriend, there were rumors of him dating Twitch star Thea Booysen. The rumors of their romance started a couple of months back, in late May 2022 or early July 2022.

To go deep into the topic, MrBeast had joined Booysen on her YouTube channel for a game of Gwent: The Witcher Card Game — a free-to-play game based on Andrzej Sapkowski’s The Witcher novels.

Similarly, a Reddit thread discusses the topic even more. Under that thread, one wrote, “From a video, I think from Beast Reacts, he mentioned he was going to Africa. Thea is from South Africa. Also, he’s appeared in two of Thea’s vids and replied to a tweet from her.”

“I strongly suspect she is the new gf. They went to the Kids’ Choice Awards together. She has two pictures of him on her profile, and he likes every picture she posts now,” another Redditor commented.

Apart from these instances, Essentially Sports reported that the rumored couple had taken a trip to Las Vegas. All of these instances were already brewing romance speculations among their fans, but they got fueled after their small Twitter interaction.

On May 30, Booysen posted the cover picture of her upcoming book, The Marked Children. The next day, MrBeast replied to the tweet by writing, “0.o,” a kaomoji emoticon for shock, disturbed, or confusion.

And Booysen used a red heart emoji to reply to MrBeast’s reply. And this enraged the people on Twitter to believe they were a couple. Many even mentioned that the YouTuber was such a supportive boyfriend.

However, these rumors eventually slowed down. But, with MrBeast now confirming his girlfriend’s name is Tia, some are wondering if the name Tia is a nickname for Booysen, whose first name is Thea.

Nonetheless, nothing could be said about it as of now. Neither MrBeast nor Booysen has said anything about their romance rumors. And until anything comes out, the talks about their relationship remain the same; nothing more than speculation.

Before MrBeast began dating his new partner, he was in a longtime relationship with Maddy Spidell — a popular social media personality. The now-former couple started dating circa 2019.

As time passed, they slowly introduced each other on their social media platforms. Besides, on 2020’s Valentine’s Day, MrBeast even surprised Spidell by filling an entire house with 100,000 roses, and the whole process was filmed and uploaded on his main YouTube channel.

Everything seemed perfect between the couple until 2022 when the rumors of their possible breakup took over the internet. People were asking questions like, “Are MrBeast and Maddy together?” “Did MrBeast and Maddy Spidell break up?”

The rumors seem true as MrBeast and Spidell haven’t featured each other on their social media handles for ages. And while they haven’t deleted each other’s pictures or unfollowed each other, they also haven’t interacted with each other’s Instagram posts.

Moreover, both of them took off their Instagram highlight that showed their pictures together on the photo-sharing platform — a thing they have had on since the beginning of their relationship.

It confirms that the MrBeast and Spidell are no longer together. The former couple might have decided to move on with the topic and not announce their split as they primarily kept their love life private.

As of now, Spidell might be seeing someone new, as hinted by her most recent Instagram story. She had shared a picture from one of her hiking in which she was pointing somewhere as a man was sitting very close to her.