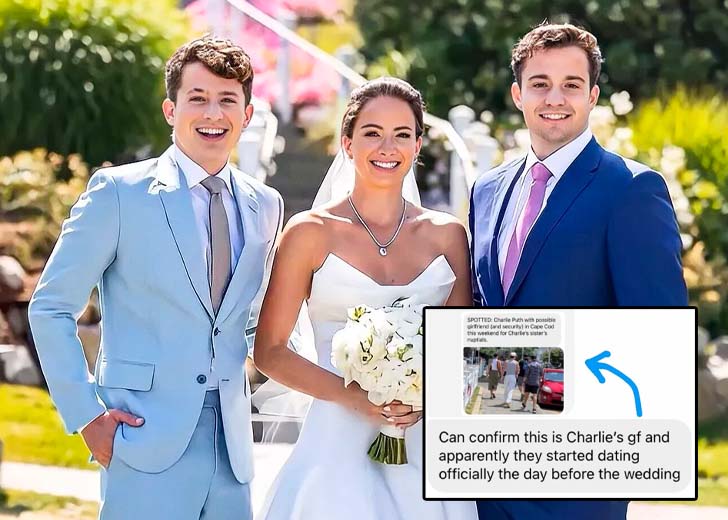 “Charlie Puth at his sisters wedding with his whole family and girlfriend is the cutest thing ever my heart is so full and happy for him,” a fan tweeted.

Charlie Puth was recently spotted with his possible girlfriend during the singer’s sister Mikaela Puth’s wedding.

The news broke into the internet after Deuxmoi’s official Instagram page posted a couple of stories showing Puth and his new girlfriend. The pictures — which featured the new couple and their security guard — were snapped in Cape Cod, Massachusetts, this weekend.

As per the gossip media, the two began dating just a day before the singer’s sister’s marriage.

For those who didn’t know, Puth’s sister Mikaela walked down the aisle with her husband, Ian Ford, in a family-filled ceremony.

Back to the dating news — the singer and his new rumored girlfriend were dressed casually in the photograph. But the girl’s identity is yet to be revealed.

This recent news has created a buzz around the internet, too, with many fans expressing happiness for the singer’s new love story.

“Charlie Puth at his sisters wedding with his whole family and girlfriend is the cutest thing ever my heart is so full and happy for him,” a fan tweeted.

On the other hand, some fans also had a laugh, implying that Puth is linked to a new girl every month.

Deuxmoi reported that Charlie Puth’s girlfriend was present at his sister’s wedding.

One user on Twitter even took a dig at Deuxmoi and Puth’s personal life, writing, “charlie don’t be sad honey deuxmoi found 2 girlfriends for you in the last two months. you’re gonna get married and be a dad soon, deuxmoi promised us.”

Previously, there was speculation that the singer was dating Renne Rapp. The rumors about the two having an on-and-off relationship also first surfaced in Deuxmoi in mid-April 2022.

There has been a lot of gossip and fandom surrounding the two since then.

Similarly, the gossip media reported that Rapp and Puth went out together for dinner. The media stated, “I am not sure but here for it if true.”

Following those stories, Twitter went into a frenzy. People began to inquire about their potential relationship and whether anything was true.

Some days later, the singer added fuel to the fire when he wrote “gr” in the comments during Rapp’s IG live stream with Chris Olsen.

Despite this, fans do not believe their relationship is genuine. The main reason for this is her confession about her crush, which occurred just a few days before the first Deuxmoi story was propped up.

In response to one of the tweets, one user claimed that Rapp had mentioned her crush just a few days before and that it was a straight girl.

Furthermore, Puth is well-known for his previous public relationships. The New Jersey native has been romantically linked to a number of celebrities since the release of his debut single ‘Marvin Gaye’ with Meghan Trainor.

Fans even wondered if he and Trainor were just friends after they locked lips on stage at the 2015 American Music Awards. Despite relationship rumors, Puth has since cleared the air about their steamy kiss.

In November 2015, the singer told USA Today, “Meghan and I are good enough friends that we can laugh about it now.”

He added, “At first, we thought, ‘Holy (expletive), what did we just do?’ I have a girl in my life who I’m not making too public because I don’t want people to get the wrong impression. But I wouldn’t be where I am today without Meghan’s initial push. Meghan greatly aided me by appearing on my debut album.”

He clarified the events leading up to their kiss, saying, “I had no idea people would care so much about my lips on my friend’s lips.”