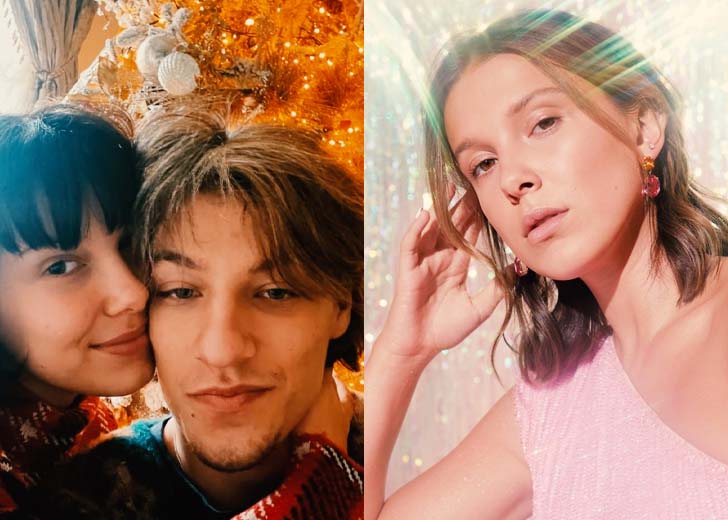 Millie Bobby Brown, popular for her role of Eleven in Netflix’s Stranger Things, has been relishing some good moments with her boyfriend.

The Spain-born English actress is currently in a relationship with Jake Bongiovi. The pair first sparked dating rumors after Bongiovi shared a picture with Brown via his Instagram handle on June 4, 2021.

In the picture, the now-confirmed couple was sitting in the backseat of a car. “bff <3,” the boyfriend captioned his post.

Later that month, on June 19, 2021, it was confirmed that they were a thing when they made their debut public appearance. Brown and Bongiovi were spotted having a stroll in the streets of New York City, walking side-by-side and holding hands.

Brown made her relationship with Bongiovi Instagram official on November 1, 2021, when she shared a picture with him in which he was seen delivering a kiss on the actress’s cheeks. The photo was taken at the London Eye Ferris wheel.

Since then, the duo has often been seen in public, and both of them have featured each other multiple times on their respective Instagram handles.

Who is Millie Bobby Brown’s boyfriend?

Brown’s current boyfriend, Jake Bongiovi, is an aspiring actor who reportedly is yet to make his acting debut.

He gained fame as the second youngest child of the American singer-songwriter Jon Bon Jovi aka Bon Jovi, and his wife, Dorothea Hurley.

As per reports, his parents were high school sweethearts who met each other in 1980. In April 1989, Jovi took a secret trip to Las Vegas from Los Angeles, where he shared the knots with his now-wife in a private ceremony.

Born in 2002 in the United States, Jake is currently 19 years of age — making him two years older than his actress girlfriend, who is 17 now. He celebrates his birthday every year on May 7. His birth name is Jacob Hurley Bongiovi, and his zodiac sign is Taurus.

Brown hadn’t featured her partner on her Instagram handle ever since she made her relationship with Bongiovi Instagram official on November 1, 2021. She probably did that to maintain privacy.

However, she deemed that Christmas was the perfect opportunity to flaunt a cute snap with her boyfriend. So, taking that decision, she took to her Instagram handle and posted a picture with him on Christmas Day.

It was the first Christmas that the new couple was celebrating together. The Enola Holmes star was seen wrapping her arms around her beau in the picture. Captioning her post, she wrote, “Happy holidays,” followed by a heart emoji.

Several actors and actresses were awed by seeing the adorable couple, including Brown’s Stranger Things co-star, Finn Wolfhard, who had given his stamp of approval as he commented, “Y’all are cute.”

A few weeks before that, on December 15, 2021, Bongiovi had shared a picture with Brown, which seemed to be captured in front of Rockefeller Center, as believed from the huge Christmas Tree seen in the background.

Going by all of that, it looks like we will be seeing more of the couple – who are very much in love – in the future.