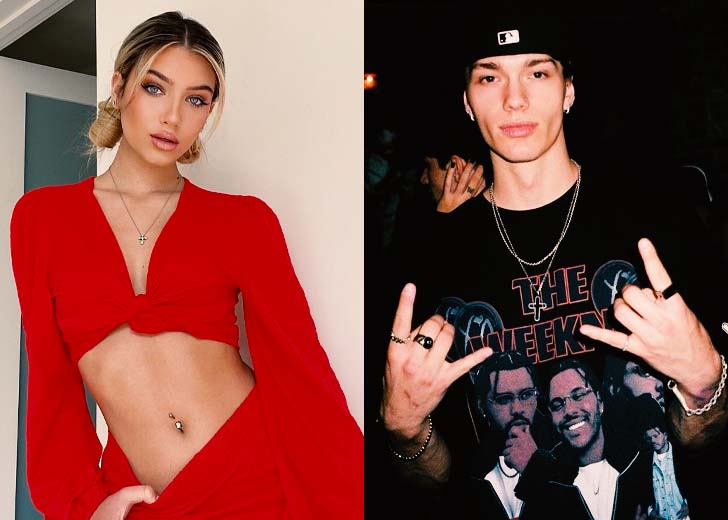 At this moment, it’s pretty much clear that Mads Lewis – whose full name is Madison Lewis – is no longer together with Christian Plourde.

The now-former couple first started dating in May 2021 when Lewis took to Instagram handle to flaunt a picture with her boyfriend. But now, they have already unfollowed each other on social media platforms like Instagram and Twitter.

Break-up rumors of Lewis and Plourde, who goes by the name of Sevryn on Instagram, first emerged around January 17, 2022, when the now-former duo seemingly deleted all of the pictures they shared alongside each other on Instagram.

While many believed that this was the end of their relationship, some fans were left confused about why they did this. Many of those fans had also taken to the duo’s Instagram posts and asked in the comment section what was wrong between them.

However, neither of them answered. Instead, there came a cryptic tweet from Lewis. In that tweet, the TikTok star hinted that she still has feelings for her ex-boyfriend Jaden Hossler – she and Hossler split in early 2021 – and he will be her “forever” love.

The since-deleted tweet read, “Jaden will always know where home is. My forever.”

Moments after the tweet was done, it got deleted. Additionally, Lewis took to her Instagram stories to clarify that the tweet was fake. As per reports, she said, “Okay so, clearly that tweet is obviously fake. And that’s all I have to say.”

Since Lewis said that the tweet was fake, many even got the idea that maybe her social media handles were hacked. And as a result, the Instagram posts were deleted, and the cryptic tweet was made.

Unfortunately, it wasn’t what the people thought, and Lewis and Plourde had officially parted ways. It was later known that the now-separated duo had also unfollowed each other on social media platforms.

Although it’s seemingly confirmed that Lewis and Plourde are no longer together, an official confirmation of their break-up is yet to come. Furthermore, no explanation has been given about that cryptic tweet, except that Lewis said it’s fake.

Many blame Mads Lewis for her split with Christian Plourde

After it was seemingly confirmed that Lewis and Plourde aren’t dating anymore, many fans were disappointed, especially Plourde’s fans.

They started to blame Lewis for the break-up. A fan of Plourde had taken to the comment section of tiktokinsiders’ post and implied that Lewis wasn’t over her ex-boyfriend, Jaden Hossler.

They had written, “They probably aren’t together no more but are we surprised??? girl kept talking about her ex-boyfriend when she had a whole man who cared for her.”

One fan chimed in and mentioned that if Plourde is no longer following Lewis on Instagram, her social media handles weren’t hacked.

“I bet he [Plourde] got sick of her always talking about Jaden and Nessa [Hossler’s now-girlfriend]. She had a whole man who wanted to cherish her and she just wanted problems. Maybe now she’ll understand,” another fan wrote.

Similarly, another fan referenced the drama created after Lewis’ split with Hossler and wrote, “He probably had enough of mads causing too much drama.”

Speaking of the drama, before dating Plourde, Lewis was in an on-off relationship with Hossler from September 2019 to early 2021. However, Lewis and Hossler’s relationship hit the walls in March 2020 when the latter collaborated with Nessa Barrett for a song.

Many say that Lewis was jealous of how close Hossler was with Barrett. Lewis and Hossler’s relationship eventually ended, and sometime after that, Hossler and Barrett came out as a couple.

In between all that, there was a huge drama. Besides, Lewis had even claimed that Hossler had cheated on her while they were together.

Are Mads Lewis or Christian Plourde seeing anyone following their split with each other? Well, nothing could be said about that as both of them have remained private ever since their split news.

It seems like they prefer to live with privacy for now. Due to that, it couldn’t be said if either of them have a new partner. Thus, their present relationship status remains unknown.