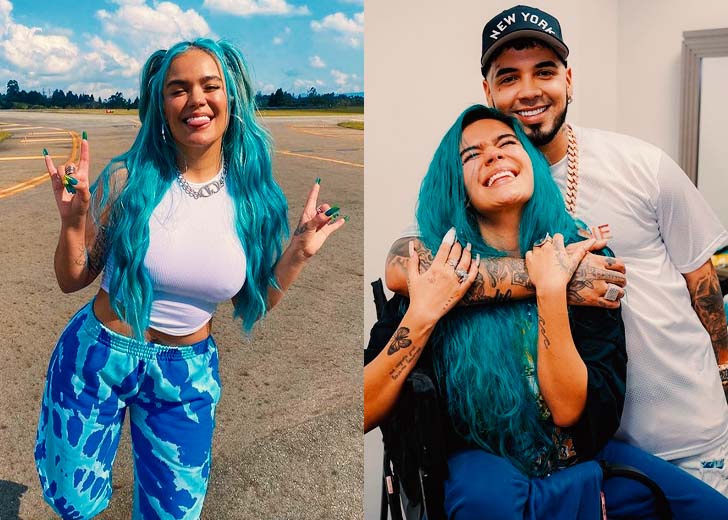 Karol G is a talented Colombian reggaeton and trap star who rose to fame through her songs like Hello, A Ella, and Mi Cama. Additionally, she has collaborated with many well-known artists such as Maluma, Nicky Jam, Daddy Yankee, J Balvin, and more.

While there is success in her professional life, the same couldn’t be said about her personal life. Karol was previously engaged to a fellow musician named Anuel AA. However, their togetherness ultimately ended in early 2021.

After her broken engagement with the Puerto Rican singer, her fans have wondered if she has returned to the dating market and has found someone special. Read on to learn more about her present and past relationships!

Who is Karol G dating now?

Karol G seems to be single and isn’t dating anyone as of this writing. Additionally, she hasn’t been married – either now or in the past – and doesn’t have a husband.

The 31-year-old Medellín, Colombia native singer seems to be focused on her career only following her split with her now-former fiance Anuel AA.

She recently finished her international tour and is focusing on her future endeavors. For now, she is preparing herself to perform at the 2022 Coachella Valley Music and Arts Festival on April 17 and 24, 2022, respectively.

Karol and Anuel first got to know each other in August 2018 when they worked together on their song Culpables and its music video.

Their relationship was taken fast forward as they eventually got engaged sometime later. Their engagement was also kept private and was only known when Karol was flaunted her huge diamond engagement ring during her appearance at the Billboard Latin Music Awards on April 25, 2019.

Over the years, they continued their relationship and even worked together on several projects. However, it looks like their togetherness wasn’t meant to last forever, as they reportedly parted ways in March 2021.

One month later, Anuel mentioned in an Instagram live session that he and Karol broke up as they had different aspirations in their life and that they still have a friendly relationship.

He said, “The truth is that we’re not together. The times that people have seen us together is because we still love each other. We tried to recover what was lost but we took our different paths. May God bless her and that she continues to achieve her dreams and goals.”

Additionally, he cleared all the rumors of them having any bad blood as he said, “There’s no negativity between us. We have a great relationship.”

Soon after his statement, Karol also broke her silence on the topic and wrote on her Instagram story, “For many years we tried to keep our relationship away from social media to take care of it.”

“The incredible things that happened to us as people and artists was a blessing and the result of a beautiful love that arrived in our lives when we most needed it. I love you, Emmanuel [Anuel’s birth name], my gratitude towards you, your family, and everything we lived, grew, and learned together is infinite,” she added.

Months later, in November 2021, the former couple showed that they still had a good friendship when Karol and Anuel performed together in Puerto Rico to mark the end of Karol’s Bitchota tour. It was the first time they performed together after their split.

Karol also took to her Instagram handle to share a couple of snaps with her former fiance and thank him for making that night special. “There were many years of happiness together, and although that stage of our lives is over, loyalty and gratitude remain intact,” she wrote in one part of the caption.

Before she was dating and then engaged to Anuel, Karol was in a few dating relationships.

As per The Sun, she was rumored to be together with a fellow Colombian singer named J Balvin in 2017. However, those speculations never turned out to be true.

Later, in February 2018, she was in a romantic relationship with a Colombian composer named Bull nene. But, their togetherness lasted for only some months as they split in September 2018.