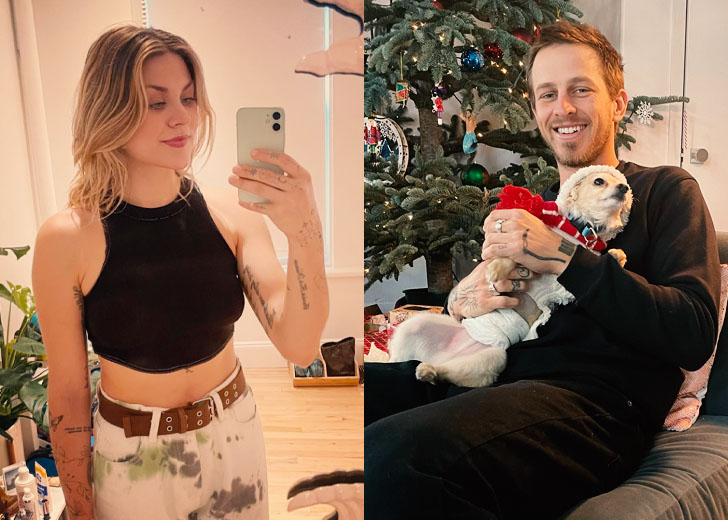 Frances Bean Cobain was born in fame as the only child of late Nirvana frontman Kurt Cobain and his singer-songwriter wife, Courtney Love.

Although the effect of her legendary rocker father and equally renowned mother’s limelight stayed there, she later made a name by herself by working as a model and visual artist. Additionally, she served as the executive producer on the movie about her late father’s life, Kurt Cobain: Montage of Heck.

As Frances is a public figure and has maintained her fame all her life, people are always eager to learn more about her and if anything new has happened in her life. Among such things, one is if she is married now or not!

Does Frances Bean Cobain have a husband?

As of this writing, there has been no news of Cobain being married to someone. So, it’s only fair to say that she doesn’t have a husband.

However, that might change after some time if everything goes well with her current relationship and lasts long. But, who is she dating now?

For a while now, Cobain has been in a romantic relationship with Riley Hawk – son of renowned American former skateboarder Tony Hawk. However, it’s currently unknown when the couple first began dating as Cobain only confirmed her relationship in the past month.

On January 1, 2022, the American model took to her Instagram handle to make an update post on her life after a year-long hiatus from the social media platform. She had posted several pictures, among which the third one was of Riley holding a dog dressed as Santa Claus.

Additionally, in the second last picture, the new couple were together on a bench on a boat, with Riley’s parents – Tony and his wife Catherine Goodman – in front of them.

The other pictures on that post were random. Some were of artwork, one was of her pet dogs, one was of her grandmother, and one was a picture of when Cobain was still a baby sleeping next to her late father.

In the caption, she explained her year-long hiatus from Instagram and mentioned that it was “exceptionally good for my mental, emotional & spiritual health. 2021 brought me more into the present moment than I’ve ever been, which I’m deeply grateful for.”

Of the pictures she posted, she said, “I wanted to share a few moments that were captured / created this past year that brought me a great amount of joy.” At last, she wished well for her well-wishers and ended the line with “happy new year.”

Besides this confirmation, Cobain hasn’t shared other details on her relationship with her boyfriend. But, it could be said that the couple has been dating each other since 2021 and will be keeping their relationship private.

Years before she began dating her present partner, Cobain was a married woman.

She was previously married to the American musician Isaiah Silva after being in a relationship for a long time. Cobain and Silva shared the wedding vows on June 29, 2014, in a small and secret ceremony.

Around 13-15 guests were only invited to the wedding ceremony, which didn’t include Cobain’s mother, Courtney Love. Thankfully, Love not getting an invitation to her only daughter’s wedding didn’t cause a rift between the mother and daughter duo.

Cobain’s marital relationship with Silva didn’t last for a long time as many had hoped. Just 21 months after getting married, in March 2016, Cobain filed for divorce from her then-husband. “Irreconcilable differences” were cited as the reason behind the split.

The divorce was finalized over a year later, on November 30, 2017. As per People, the former couple had fought over the ownership of Cobain’s late father’s iconic guitar, which she eventually lost to Silva during the divorce settlement.