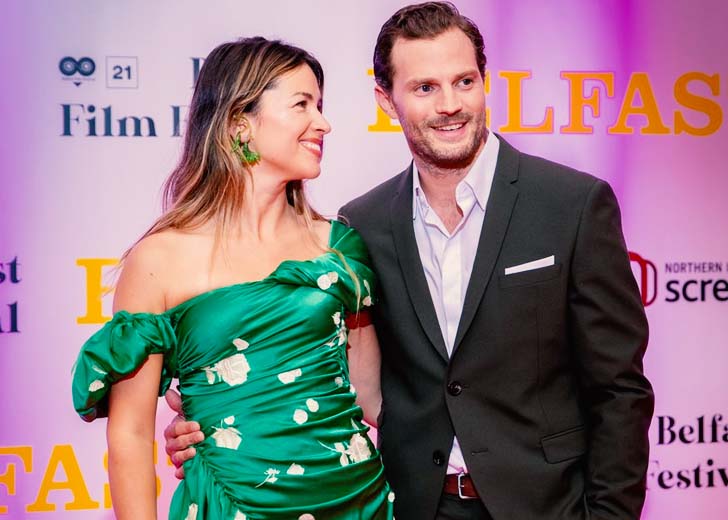 Jamie Dornan – known for his role in Fifty Shades of Grey – is a happily married man.

The Northern Irish actor has been married to his wife Amelia Warner for over eight years now. The married duo first met each other at a party in Hollywood, California, in 2010. Their meeting was classic as they knew each other through mutual friends.

Soon they began dating, and in 2012, they got engaged. Around a year later, on April 27, 2013, they shared the wedding vows in front of close friends and family members.

In their marital relationship, Dornan and Warner are blessed with three children. They first welcomed a daughter named Dulcie Dornan on November 21, 2013. On February 16, 2016, Warner gave birth to another daughter named Elva Dornan.

Three years later, on February 17, 2019, the pair welcomed their third daughter named Alberta Dornan. Their eldest daughter was born in Canada whereas the latter two were born in the United Kingdom. As of now, the family of five happily resides in The Cotswolds, England.

Who is Jamie Dornan’s wife?

As an actress, she has 23 credits to her IMDb profile, including Casualty, Aristocrats, Mansfield Park, Quills, Waking the Dead, Take a Girl Like You, Happy Endings, Æon Flux, The Seeker: The Dark Is Rising, and The Other Side.

Talking about her career as a musician, she released her first studio album titled Renditions on December 12, 2011. Since then, she has released a few songs but has mainly worked as a composer for feature films.

As a composer, she has worked in a total of six movies. For her work as a composer in the 2017 romantic period drama Mary Shelley, she was for a World Soundtrack Awards and won an IFMCA Awards.

Born in 1982 in Liverpool, Merseyside, Warner celebrates her birthday every year on June 4. Her birth name is Amelia Catherine Bennett, and her zodiac sign is Gemini. She also goes by the stage name of Slow Moving Millie.

The 5 feet 6 inches tall former actress is the only child of her actor parents, Alun Lewis and Annette Ekblom. When she was small, her parents divorced, and she moved with her mother.

As for her education, she initially studied at the Royal Masonic School for Girls and then enrolled at the College of Fine Arts at the age of 16. Later, she studied for a while at a Belsize Park-based college.

Before her marriage with her present husband, she was married to actor Colin Farrell – in a non-legal ceremony in 2002. However, the relationship only lasted for four months.

Jamie Dornan was smitten by his wife since the start

Dornan was impressed by his wife, Warner, since the moment he laid his eyes on her. In his 2015 interview with Independent, he was asked whether anything about his partner irritated him initially, but he has since learned to love them.

In reply, the actor directly said no. As he went on, he mentioned, “I was smitten from the start, I really was. I’m more in love with her today than I was at the start, so no.”

The outlet further reported that Dornan’s wife has been very supportive of his acting career since the start of their relationship, and Warner even moved to Canada just a few weeks after she gave birth to their first daughter, Dulcie.

At that time, Dornan was in Canada for the filming of the movie, Fifty Shades of Grey.

Additionally, as per The Sun, the actor had opened up about the difficulties of marriage in his interview with Sunday Times Magazine. He said:

“We get frustrated at times, usually when traveling with the kids, but we’d never let anything boil and become a thing. We know couples who are plate-throwers, but that’s just not us.”

Furthermore, The Sun also reported that Independent asked Dornan’s wife if anything had changed since her husband gained the limelight following his role in Fifty Shades of Grey.

In reply, Warner said, “Nothing has really changed in our lives since Fifty Shades. The biggest change for us was having kids. We now live in the Cotswolds, rather than London. We are very removed from all the hype. I don’t see that stuff in the papers.”

As an actor, Dornan has a very busy work schedule and has to stay away from his wife and three daughters for weeks. Although he tends to take them with him on several occasions, he can’t do that always.

So, the actor had made a rule that he would not spend more than two weeks away from his family. However, while speaking with Radio Times in January 2022, Dornan admitted that he once broke that rule.

He said, “I’m not going away from my family. I have a two-week rule. Although I broke it last week because I ended up having to stay in Los Angeles longer than I thought.”

Continuing his statement, he said that when he was filming his new show, The Tourist, in Australia, he took his wife and children with him. “For The Tourist, they came with me for every step of it. My kids went to school. It was marvelous,” he said.

“It was our eldest daughter’s eighth birthday recently, and she spent an hour and a half on Zoom with her Aussie mates at 8am,” he further added.

Going by all of that, it’s surely proven how much Dornan loves his family and that he wants to spend every moment with them.