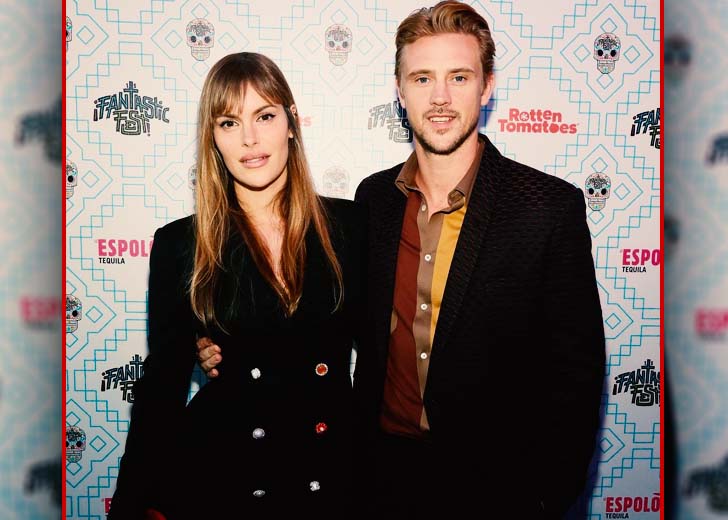 Boyd Holbrook is a talented American actor who is set to make his appearance as John McBride in the horror-genre movie, The Cursed (previously titled Eight for Silver). It will release in the U.S. on February 18, 2022, following a premiere at the 2021 Sundance Film Festival.

Coming back to the actor, he has gained the limelight for his performances in movies and TV shows such as The Big C, The Host, Gone Girl, Narcos, Logan, The Predator, In the Shadow of the Moon, and The Fugitive.

Holbrook’s professional life sounds flourishing and quite successful, just like his personal life. The actor relishes a blissful marital life with his longtime wife, Tatiana Pajkovic. But, who is she?

Who is Boyd Holbrook’s wife?

Holbrook’s wife, Tatiana Pajkovic, is a Danish actress and singer who primarily gained fame following her marriage with Holbrook.

In her acting career, she has only four credits, which are Nynne, Det vildeste westen, The Transporter Refuelled, and Devil Town.

Born in Copenhagen, Denmark, Pajkovic celebrates her birthday every year on January 25. Her exact age is presently unknown as her birth year is not disclosed. Her zodiac sign is Aquarius.

As per her IMDb profile, her father’s name is Dragomir Pajkovic, a Montenegrin actor. Not much is known about her mother and if she has any siblings or not. During her childhood days, she used to take mixed martial arts and piano classes.

The Prestonsburg, Kentucky native actor reportedly met his future wife in 2016. After knowing each other well, they eventually started dating each other.

Following a relationship of two years, they reportedly shared the wedding vows in 2018. Although they are married, they have kept every detail of it private and are yet to share their wedding pictures.

Due to that, many outlets have even cited the couple as “boyfriend and girlfriend” only instead of “husband and wife.” But, it’s not true, as Holbrook himself has called Pajkovic his wife in several of his interviews.

Since the birth of their son, the married couple has been relishing their days as parents, which is also evident by the pictures they have shared through their respective Instagram handles. However, the actor has deleted almost every post from his Instagram handle due to unknown reasons.

Nonetheless, there are still several pictures of the family of three on Pajkovic’s Instagram handle. On June 5, 2021, she posted a photo of her husband with her son, who were having a lovely time near a lake.

More recently, on January 1, 2022, she posted a family picture in which she was standing near her partner, and Holbrook was holding his son on his neck. “Happy New Year,” she captioned the post.

Going by all of that, it could be said that Holbrook has found the right partner who has been with him in every condition and is a good mother to his son. Besides, he even credits her for the parenting skills he has.

During an interview with People in September 2019, the host had mentioned that his wife is Danish and that Denmark is ranked one of the happiest countries in the world and attributed to successful parenting.

The hosts then asked him if his wife had taught him anything about parenting. In reply, he said, “Oh my gosh. I think she has taught me probably 95% of the parenting that I now know. My wife is amazing.”

Before being in a marital relationship with his present wife, Holbrook was in some dating relationships and was even engaged once.

As per reports, his first relationship was with a Dominican model named Omahyra Mota. They began dating in 2002 and ended things three years later, in 2005.

Following that, he was in a relationship with the Canadian model, Julis Dunstall, from 2007 to 2009. Then, in 2012, he met actress Elizabeth Olsen on the sets of their movie, Very Good Girls. They got close and began dating around the same time.

After dating each other for two years, on March 13, 2014, they shared engagement rings and got engaged. However, unlike their relationship, their engagement didn’t last long as they parted ways less than a year later, on January 19, 2015.

In 2015, he started dating French actress Laure de Clermont-Tonnerre. They eventually break up after some brief time. Holbrook then dated Maika Monroe for a while in 2016 before meeting his future wife.