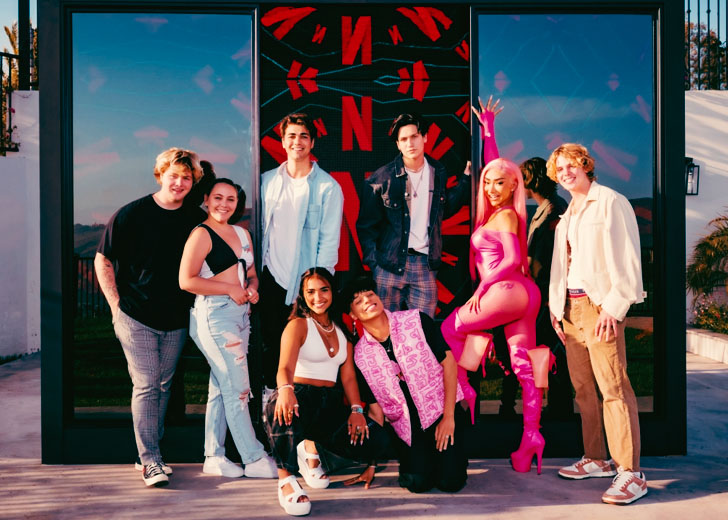 The Hype House just got real — thanks to Netflix — and its cast/members are quite hyped about it.

The show premiered on the platform on January 7, 2022, and is getting several positive as well as mixed reviews from critics and audiences.

“Get an inside look at social media’s most talked-about stars as they navigate love, fame and friendship while creating content and living together” is the official synopsis of the show.

For those who don’t know, The Hype House is the name of a Los Angeles, California-based group as well as a mansion in the same city. The people living in the house or part of the group are several teenage TikTok and YouTube stars.

Meet the Cast of the ‘Hype House’

On April 22, 2021, Netflix announced – via Twitter – that they would be making a reality television show that follows the TikTok group, The Hype House.

As per the announcement, the series will be “unscripted,” and it “will reveal a side of themselves (and their relationships) that we rarely see!”

Here is a quick look at the cast members, their age, and internet followers!

Petrou, age 23, is one of the founders of The Hype House — the group. He is a well-known internet personality who has a fan-following of 2.1 million and 8 million on Instagram and TikTok, respectively. He also has a self-titled YouTube channel with over 1.83 million subscribers.

Annon, age 21, has been a part of the group since 2019. She has a fan-following of over 13.6 million and 2.2 million on TikTok and Instagram, respectively. An internet personality on her own, she also gained fame as the girlfriend of a fellow Hype House member Alex Warren.

Dragun, age 25, gained fame from her different professions as a make-up artist, model, and YouTuber. Thanks to all that, she has gained 9 million and 14.2 million followers on Instagram and TikTok and 3.61 million subscribers on her YouTube channel.

The 23-year-old Merritt, also known as Larray, is mainly a YouTuber but has also achieved great fame via TikTok. In his TikTok handle, he has over 25.3 million followers. Similarly, his YouTube channel has 8.48 million subscribers.

Hudson, professionally known as Lil Huddy, is another founder of The Hype House alongside his ex-girlfriend, Charli D’Amelio. Apart from being an internet personality, the 19-year-old is also a singer. He has 32.4 million and 11.9 million followers on TikTok and Instagram, respectively.

Wright is an 18-year-old TikTok star from California who has gained fame at such a young age. In his Instagram and TikTok handle, he has a fan-following of over 1.3 million and 8.8 million.

Warren, age 21, is also regarded as the co-founder of the TikTok collective house. In addition, he runs a self-titled YouTube channel that has gained 2.66 million subscribers. As for his following on TikTok, he has over 14.7 million followers.

The Cast Are Excited about Their Netflix Debut

Since the Netflix announcement, several cast members of the Hype House have been very excited about it. And their excitement level rose up when the show premiered on the streaming platform on January 7, 2022.

For instance, on December 25, 2021, Petrou and other cast members took to their respective Instagram handles to share the official trailer of their show. “Can’t wait for y’all to see this show January 7th,” Petrou wrote in his caption.

Petrou’s excitement to be a reality star was also seen in his Instagram post of January 6, 2022. He had posted a mirror selfie of him alongside his girlfriend, Mia Hayward. In the mirror, several things were written, including “Hype House will be #1 Netflix.”

The co-founder of the group had also shared several posts from other of his friends/cast members in his Instagram story, and all of those posts were related to the show.

Similarly, on January 7, 2022, the official Instagram handle of The Hype House shared several stills from the show on the occasion of its debut on Netflix.

Furthermore, on January 8, 2022, they posted a screenshot from Netflix that showed the reality series ranked number 4 in the United States. “We love you all thank you for watching,” they had written as the caption.

Going by all that, it cannot be discarded that the members of The Hype House are very much excited for their show and to be a reality star.