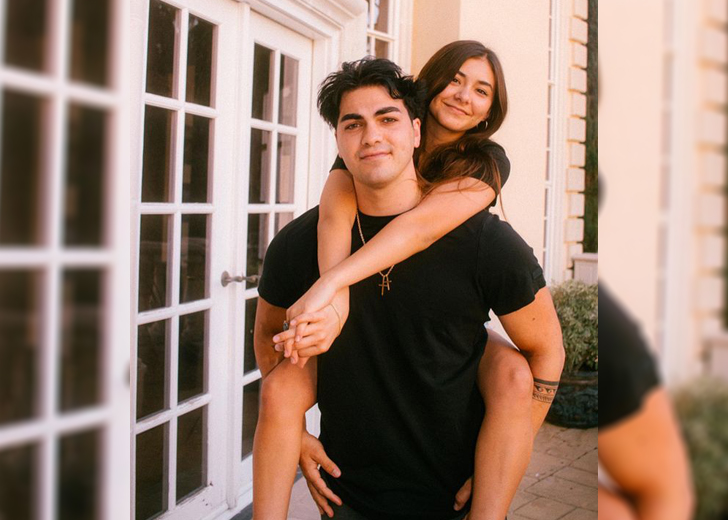 Mia Hayward is a social media personality, and a member of The Hype House who gained fame through her lip-sync and dance videos on TikTok. She currently boasts more than 3.7 million followers on her TikTok handle.

She also has a healthy fan following of over 1.1 million followers on Instagram and over 40,000 subscribers on her self-titled YouTube channel.

Coming to her personal life, she is currently in a relationship with a fellow member and founder of The Hype House, Thomas Petrou.

After going through Hayward and Petrou’s Instagram handles, it is evident that they began dating each other in early 2020.

On April 27, 2020, Petrou shared a couple of pictures alongside Hayward for the very first time. In some pictures, Hayward was seen on Petrou’s back, whereas, in one picture, they were cuddling each other.

Less than a month later, on May 8, Hayward shared two pictures alongside her boyfriend in which they were seen swimming together in a pool. These two Instagram posts from them proved that they were in a relationship.

On September 2, Hayward labeled Petrou as her boyfriend for the first time while wishing him his 22nd birthday. She had shared some adorable pictures alongside him and wrote, “Happy birthday to the best boyfriend I could ever ask for. Thank you for all you do for me, for always treating me with the most respect.”

As time passed, they began flaunting more couple-y pictures alongside each other and celebrated several occasions, such as their birthdays, Valentine’s Day, and more. The duo’s bond also got strengthened over the months they spent together.

The couple recently took a small vacation to several places like Hawaii, Disneyland, and Paris. On October 4, 2021, Petrou shared some moments from their visit to Paris and captioned the post as “City of love.”

Going by all of those cute pictures Hayward and her partner have been sharing over the months, it certainly looks like their bond is strong, and they were made for each other. Only time will tell if the two will end up tying the knots.

As mentioned earlier, Hayward’s boyfriend is the founder of The Hype House, a house where several TikTok, Instagram as well as YouTube stars come together to live in Los Angeles, California.

Apart from that, Petrou is a well-known YouTube and TikTok star. In his self-titled YouTube channel, he posts different types of videos and has managed to garner over 1.85 million subscribers and 320 million views.

Born in 1998 in the United States, Petrou celebrates his birthday on September 2 every year. He is currently 23 years of age. As per his date of birth, his zodiac sign is Virgo.

Currently, there is not much available information on his family life except that he is half Greek and has a younger sister whose identity is not disclosed.

Before he was in a relationship with his current girlfriend, he was dating a fellow YouTuber named Kayla Pimentel. They began dating each other in 2014 and ended their togetherness in 2019.