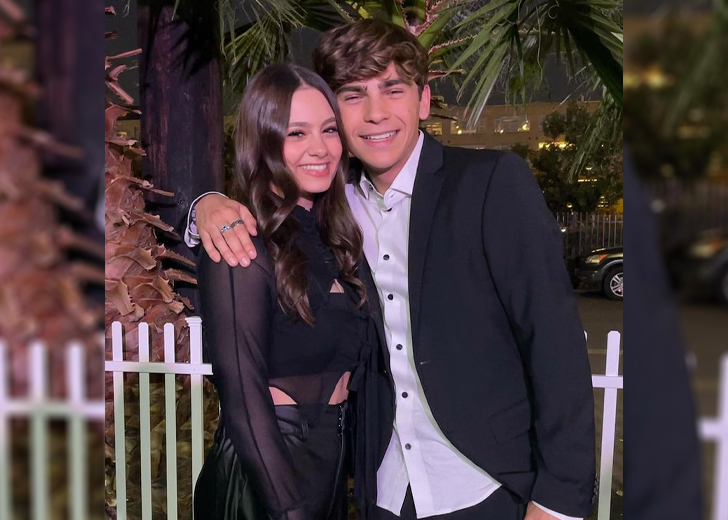 Jaime Adler is officially off the market!

On Saturday, October 30, 2021, the England-born TV actress revealed that she accepted her long-time friend, Ayden Mekus’ proposal and that they were officially dating now.

Adler shared a series of pictures and clips alongside her partner in which they were hugging each other. “My person,” she captioned the post with a heart emoji.

On the same day, her friend-turned-boyfriend also shared some pictures alongside the actress and captioned it with “She said yes,” with a red heart emoji attached.

The comment section of both of their announcement posts was filled with congratulatory messages for the new couple in the town. The comments were mainly from the duo’s close friends and their fans.

The new couple’s relationship first began as a friendship only. Going through Adler’s Instagram handle, it seems like she met her future boyfriend around 2019.

On July 18, 2019, she shared some snaps alongside Mekus for the first time. At that time, the two were just meeting each other in Los Angeles, alongside some of their other friends.

As time passed, their friendship grew more and more. Some instances of their strong friendship were also seen through the pictures they shared alongside each other on their respective Instagram handles.

After knowing each other for over two years, they apparently decided it was time to take their friendship to another level. And, just so it was meant to happen, Mekus proposed, and Adler accepted his proposal.

Now that they are officially boyfriend and girlfriend, we wish the couple nothing but the absolute best for the next stage of their relationship.

Adler’s boyfriend is a well-known American social media personality who came into the limelight after making several appearances in Dhar Mann’s YouTube videos.

In addition, he has a YouTube channel of his own where he has gained over 1.49 million subscribers and 93 million views. He regularly uploads different content such as vlogs, challenges, pranks, and more.

Thanks to his popularity through YouTube, he has also garnered over 940,000 and 5.4 million followers on Instagram and TikTok, respectively.

Born in 2005, in California, Mekus celebrates his birthday on August 2nd every year. He is currently 16 years of age. As per his date of birth, his zodiac sign is Leo.

Similarly, talking about Mekus’ past relationships, before he was dating his now-girlfriend, Adler, he was in a relationship with a TV actress and YouTuber named Symonne Harrison. They were dating from 2020 to 2021.

Following his split with Harrison, he began dating another YouTuber named Claire Rock Smith in 2021. Less than a month ago, on October 4, 2021, Mekus uploaded a YouTube video in which he announced that he and Smith were no longer together.

Although he has separated from Harrison and Smith, he still has maintained a good friendship with both of them and has even featured their YouTube channels.