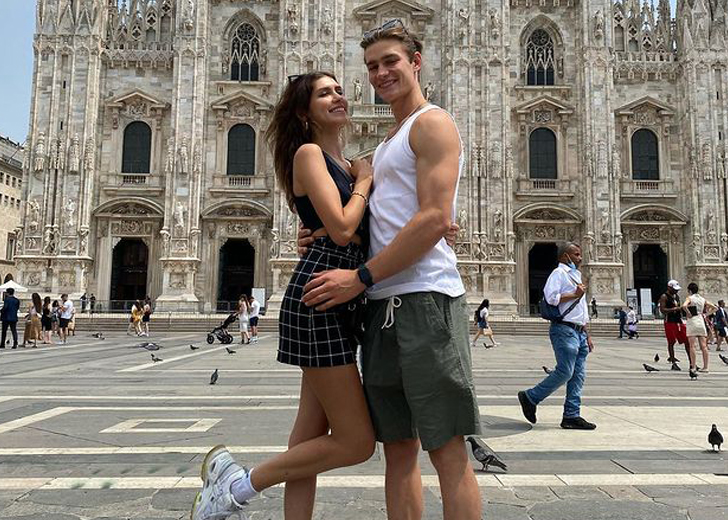 Congratulations to Ana ‘Lisa’ Kohler who celebrated her one-year dating anniversary with her boyfriend Luca Heubl on October 12, 2021.

On that special occasion, the Swiss-born musician took to her Instagram handle to share a series of pictures taken over the months with her German partner. She also wrote a long caption to accompany those cute pictures.

She started with, “happy one year to us.” She then wrote some heartfelt words related to love, saying, “someone who never tells you that you’re too much of this and too little of that. Because to them you’re just enough of everything they love.”

Kohler stated her boyfriend was the best thing that ever happened to her. In the end, she wrote a line in the German language, “Dich will ich für immer behalten,” meaning “I want to keep you forever” and another line in English – “I love you forever.”

Although they began dating in October 2020, the musician only introduced her partner on June 2, 2021, when she shared a picture alongside her beau, in which they were kissing. On the same day, Heubl also posted the same picture on his Instagram and introduced his girlfriend.

Following that, the two have been sharing a number of pictures alongside each other via their Instagram handles. Seeing those pictures, it could be said that they have a lot of love and affection for each other and their togetherness will last for years.

Before being in a romantic relationship with her current boyfriend, Kohler was dating an English musician named Charlie Lenehan. They began dating in 2018 and subsequently ended their relationship sometime around late 2018 or early 2019.

Who Is Ana Lisa Kohler’s Boyfriend?

Kohler’s boyfriend, Luca Heubl, is a German fashion model who came into the limelight after doing fashion shoots for different brands. He is also a fitness influencer who occasionally provides workout routines via his Instagram handle.

Born in 1996, in Germany, Heubl celebrates his birthday on November 26th every year. He is currently 24 years of age. His zodiac sign is Sagittarius. For his education, he enrolled at Goethe-Universität Frankfurt.

He hasn’t shared much about his parents, due to which the details of his parents are unknown. Apart from his parents, he has a brother named Marvin.

While Heubl is a rising fashion model, his girlfriend, Kohler is a rising musician on the other hand. She garnered fame through her songs and by posting lip-syncs and other content on TikTok, where she has over 1.4 million followers.

She was born on April 24, 1998, in the suburbs of Switzerland. She is currently 23 years of age. Her zodiac sign is Taurus.

Much like her partner, not much is known about Kohler’s parents. However, her Instagram feed tells us that she has two younger siblings; a brother named Ruben and a sister named Tamar.