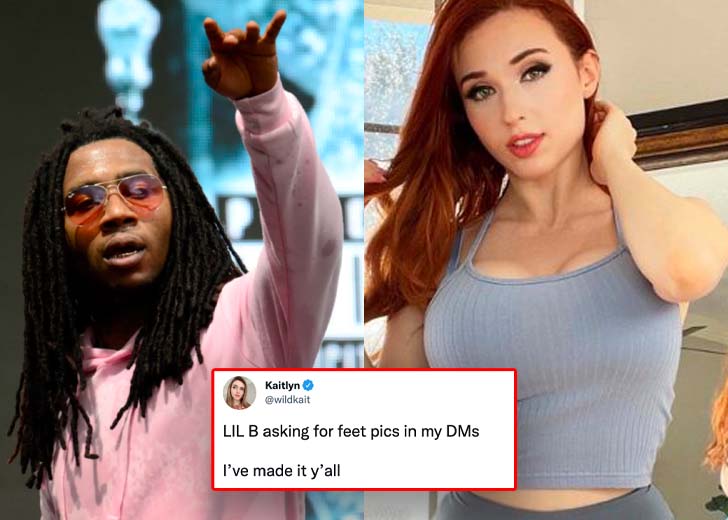 “LIL B asking for feet pics in my DMs…I’ve made it y’all,” Amouranth tweeted.

Kaitlyn Michelle Siragusa, famously known as Amouranth, is making some revelations about the rapper Lil B.

The Twitch streamer and OnlyFans model recently took to Twitter to leak a DM in which the rapper apparently asked her to send custom feet pictures.

“LIL B asking for feet pics in my DMs…I’ve made it y’all,” the diva wrote in her tweet.

Speaking of the message that Lil B sent to Amouranth, the rapper precisely asked her to write “I love Lil B” on her hands, body, and feet and take photos for him to post on social media.

His message initially read, “hey big fan of her content i liked your page!” He later went on to specifically ask that her face and feet are included in all the photos — and she gets fully clothed and the images are not “computer generated.”

Have a look at the full message in the picture below:

As soon as Amouranth exposed the DM on social media, netizens were quick to write down their thoughts. “Surprised it didn’t happen sooner tbh,” a user added to the thread.

Someone then shared that the rapper did that kind of activity regularly and she, herself, received one such message from him in the past. Her tweet read, “Nah, he does this to literally everyone as a meme. He did it to me in 2018 when I had about the same following I have now.”

Indeed, Lil B’s notorious activities haven’t been hidden from the fans, as he has time and again messaged similar things to other celebrities.

According to TheDailyBeast, the rapper has sent similar requests for years, even to girls who were underage.

On the other hand, Amouranth isn’t all clean, too, as she was infamous for selling fart jars in the past. And she used to charge as many as $1,000 for her fart jars.

Through her February 28, 2022, tweet, Amouranth even revealed her company, ‘Cutie-Pa-TOOT-ies,’ which sold personalized fart jars. Her package apparently included one piece of her hair, a fart sealed in a jar, and her signature on the lid.

That’s not all! She also offered her hot tub water as well as an autograph for $200.

Hence, keeping Amouranth’s history, fans wouldn’t be surprised if she demands a huge amount from Lil B to send him the “feet pics” that he asked for.