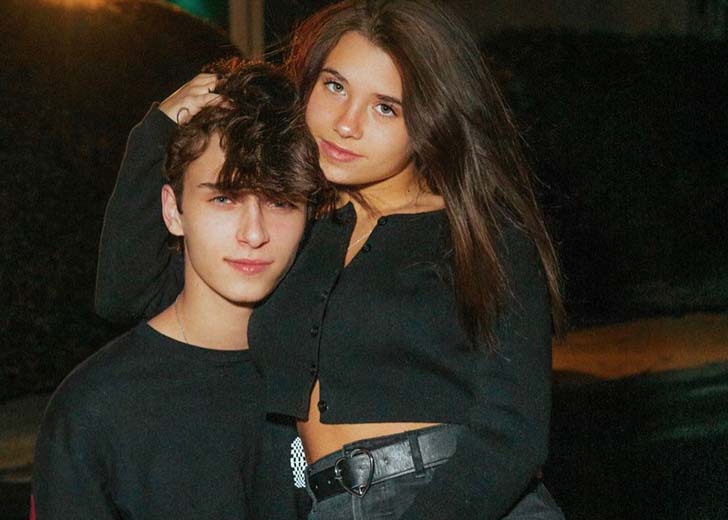 Are the former couple dating again?

Everything seems to be going right to where it started, at least for Nessa Barrett and Josh Richards.

The former boyfriend and girlfriend seem to be getting back together after Barrett’s split with Jaden Hossler in early April 2022.

The talks of Barrett and Richards getting reunited first started during an episode of the BFFs podcast that aired less than a week ago, on May 11, 2022. And now, on May 15, the two were caught hanging out together.

The Instagram handle of TikTok Insiders posted a screenshot of a photo sent over Snapchat. In the picture, Richards was walking just a step ahead of Barrett — they were walking by a house’s front gate.

The person who sent over the snap had written something over the photo. It read, “Not porter catching the tea of Josh and messages hanging before the entire world will know.” “Creepy, I know, but I needed proof,” they added.

Moments after the post was made, BFFs podcast’s Instagram handle commented, “It’s sure gonna be an interesting week on the pod….” The original Tiktokroom’s Instagram handle also shared another picture of them walking by a street.

Josh Richards and Nessa Barrett were spotted together after Nessa’s break up with her now-former boyfriend, Jaden Hossler (Photo: Instagram)

Furthermore, the BFFs podcast’s Instagram handle made a video using those two images and Capone’s ‘Oh No’ as the background music. The video started with Richards saying he hadn’t met Barrett at all – he said that during the recent BFFs podcast – and then showed those pictures.

Talks about Josh Richards and Nessa Barrett on the BFFs podcast

On the May 11 episode of the BFFs podcast, host Dave Portnoy asked Richards if he and Barrett were flirting again.

Richards was again quick to decline and started to check the sheet to see if that discussion was said to be done. As their conversation went on, Portnoy explained the whole situation about Richards and Barrett’s relationship to their guest Gabbie Hanna.

Portnoy mentioned that Richards and Barrett started dating when they started the BFFs podcast, and Barrett was on the show a couple of times. “They were all lovey-dovey, soft-spoken,” Portnoy added.

“Three or four weeks into the show watching, Nessa was found out that she was cheating on Josh with Josh’s basically best friend Jaden [Hossler]. They [Nessa and Jaden] started dating, and it became a big thing.” “Wait, so this is somebody who cheated on you?” asked Hanna.

Richards simply said, “Yes,” but Portnoy was there to add, “with one of his best friends.” “Roommate,” Richards corrected. “Oh, he was heartbroken at the time, but he is over it now,” Portnoy said about the time Richards found out Barrett was cheating on him.

Afterward, they talked about Richards’ new girl named Mia, but Richards clarified that he and Mia only hung out a few times, nothing serious was going on between them, and they hadn’t talked to each other for a while.

Portnoy then asked Chickenfry if she thinks Richards and Barrett will reunite because he believes they do. “I mean, Josh liking these [fan] videos is like, we’re tittering into it,” Chickenfry said before Richards interrupted her.

Richards said, “I don’t know, like how much that [liking the fan videos] was on purpose.” He was asked what that means, but Portnoy joined in again and said that liking one video might be an accident, but liking two videos isn’t an accident.

“I don’t know if I liked two videos. Did I? I know there was a one that I remember I clicked like, then I realized that was stupid, I gotta unlike it.” Richards added. When Hanna asked why he was doing that, he mentioned it was fun to feed into the drama.

In the end, they were talking about bringing Barrett into the podcast, about which Richards said, “I don’t know. I guess we would have to see.”

After the podcast, there have been a couple of instances where the BFFs podcast has hinted that Barrett might become a guest, but it’s still not confirmed. And the same answer is applied as to whether Richards and Barrett are dating again or not.

Posted on February 2, 2022February 2, 2022
Tayler Holder has been unfollowed by many, especially his friends, on Instagram. But why? Although nothing has been confirmed as to what’s the main...
Read More