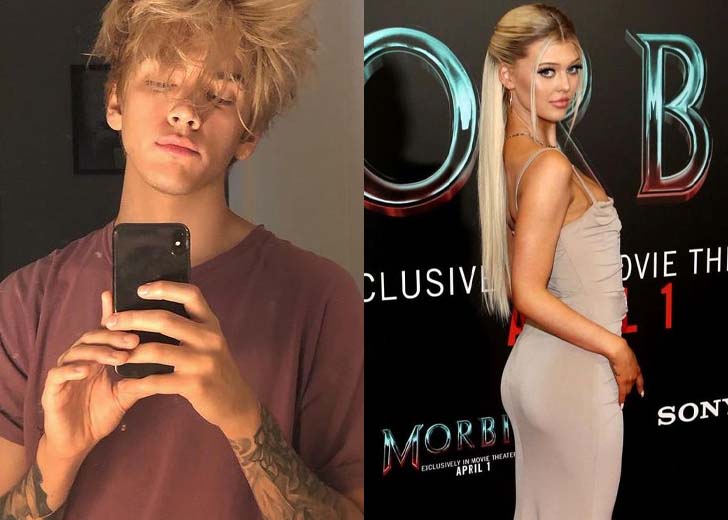 In August 2020, Loren Gray first introduced her now ex-boyfriend Kyle DeLoera, aka DYSN, among her followers.

And by now, we are already aware that the TikTok star and the pop singer have parted ways. Recently, on April 17, 2022, Gray revealed that her former boyfriend had cheated on her, and she learned the news at Coachella 2022.

“Finding out your ex was cheating on you from some random girls at Coachella <<<<,” she posted on Twitter. The tweet has since been deleted or kept in private mode.

Here is everything we know of Gray and DeLoera’s relationship!

Gray and DeLoera officially began dating sometime around mid-2020. But, at the time, the TikTok star was rumored to be in a romantic relationship with another internet celebrity, Taylor Holder.

The rumors initiated after the two worked together on Gray’s music video and were caught holding each other hands. However, both were quick to shut down the baseless speculations, and Gray even went on to reveal that she was in a happy relationship.

While commenting on someone’s Instagram post, Holder wrote, “There’s a whole crew with us if you were able to see around us but good try tho.” “bae date what the fwak. We’re shooting for a video! I have a boyfriend, and we’re [very] happy,” Gray wrote in another comment.

Sometime after revealing she had a boyfriend, Gray introduced him to the world, and her followers got to know that he was Kyle DeLoera, aka DYSN. Following that, the two often shared multiple pictures via their respective Instagram handles and made many TikTok videos.

The couple’s togetherness seemed to be going fine until late 2021, when rumors surfaced that they had broken up. Their fans were able to piece everything up after noticing that they had erased everything related to their relationship on their social media handles.

The final piece of confirmation came in the next year, on 2022 Valentine’s Day when Gray shared a video on TikTok where she mentioned that she would be spending the day of romance and love as a single and spent money on herself only.

Later, on March 31, 2022, Gray appeared on the BFFs podcast and revealed that she and DeLoera officially split at the end of January 2022 after almost two years of dating.

Before making her appearance on the BFFs podcast, Gray had seemingly remained mum about her split with DeLoera.

But when she was present there, she let down her guard and opened up about a few things. She first revealed that she and DeLoera parted ways in late January 2022, and when asked why, she said, “cuz I’m not here to mother anyone’s son.”

Her answer confused the host Dave Portnoy who then asked her if DeLoera was the one with a kid. Gray said, “No, basically he was mine [kid].”

As the conversation went on, Portnoy asked the TikTok star if her ex-boyfriend was aware of her romance talks with Josh Richards. While they didn’t talk much about that, Gray did reveal that DeLoera stopped following her on Finsta – short for fake Instagram.

She added that he fully stopped sharing his location with her when she returned from Las Vegas. And when DeLoera tried to reach back to Gray, she treated him in the same manner. She did so because when she is done with a relationship, that’s it for that.

Gray also noted that everyone thought DeLoera was cheating on her, but she never had the odd feelings about it.

At the end of the podcast, the TikTok star and the hosts went on to play the “[expletive], Kill, Marry” game. She was given three choices, and all of them were her ex-boyfriends: DeLoera, Ian Jeffrey, and Leigh Cantwell.

While choosing among them, the 20-year-old internet star chose Jeffrey to [expletive], Cantwell to marry, and DeLoera to kill. She also clarified that she only decided to kill DeLoera because their breakup was fresh.