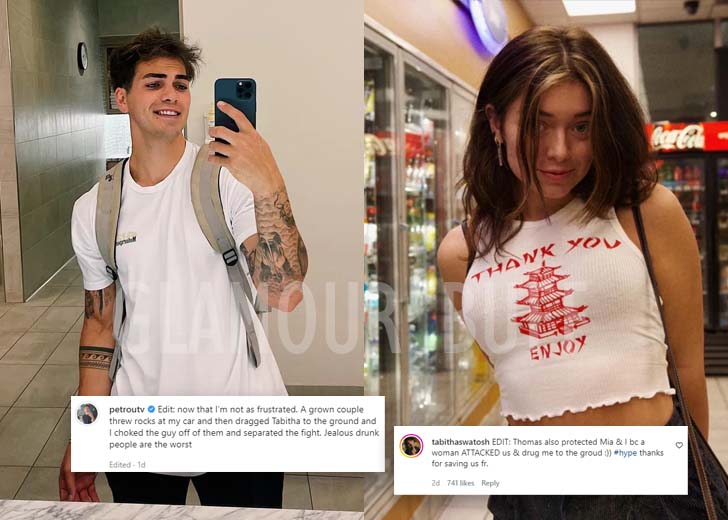 Thomas Petrou recently got into a fight with a grown couple after they threw rocks at his car.

On Sunday, May 15, 2022, the Hype House founder posted a selfie via Instagram, which was taken a few steps in front of a police car.

In the caption, he wrote, “Got in a fight tonight because some 40 year old insecure man can’t accept young people being successful. #hypehouse I won, don’t worry.”

The screenshot of his post was shared by the Instagram handle of TikTok Insiders. In the comment section, Petrou and Tabitha Swatosh, a fellow Hype House member, clarified what exactly happened that night.

Petrou mentioned that a grown couple threw rocks at his car and then dragged Swatosh to the ground. After that, they tried to press him. And in an attempt to fight back, he choked the man out.

Swatosh went into more detail as she wrote, “We were enjoying dinner with my PARENTS. A woman threw stuff at Thomas’s car. Then the drunk woman and her boyfriend started threatening Mia and I.”

After that, the woman took Swatosh to the ground, and her boyfriend climbed on her and put her in a chokehold. “And Thomas drug him off (his story to tell) protecting me. The police handled the rest. ALL because they ‘hated us hype house kids’ lol kids,” she added.

Thomas Petrou and Tabitha Swatosh give clarification on their fight with a grown couple (Photo: Instagram)

A while after Petrou made his post, he went on to edit his original caption and changed it entirely. In the new caption, he first wrote, “Edit: now that I’m not as frustrated. A grown couple threw rocks at my car and then dragged Tabitha to the ground.”

“And I choked the guy off of them and separated the fight. Jealous drunk people are the worst,” he added.

Swatosh also commented on his post as she wrote, “EDIT: Thomas also protected Mia & I bc a woman ATTACKED us & drug me to the groud :)) #hype thanks for saving us fr.”

“As well as a lady twice my size decided to try to fight me, because she was drunk and tabitha came to tell the girl not to touch me so she grabbed her instead,” Petrou’s girlfriend Mia Hayward commented.

Several worried fans of the TikTok star had also taken to the comment section. One wrote, “Wtf is wrong with people?? I hope you guys are alright! Especially Tabitha.”

“Glad you guys stood your ground! Terrible to see jealousy in the world when we should all either: A. mind our business or B. support &/or be happy for one another. Glad you all are okay!!” another fan commented.

As of now, everything seems to be fine, and as Swatosh mentioned, it was handled by the police.