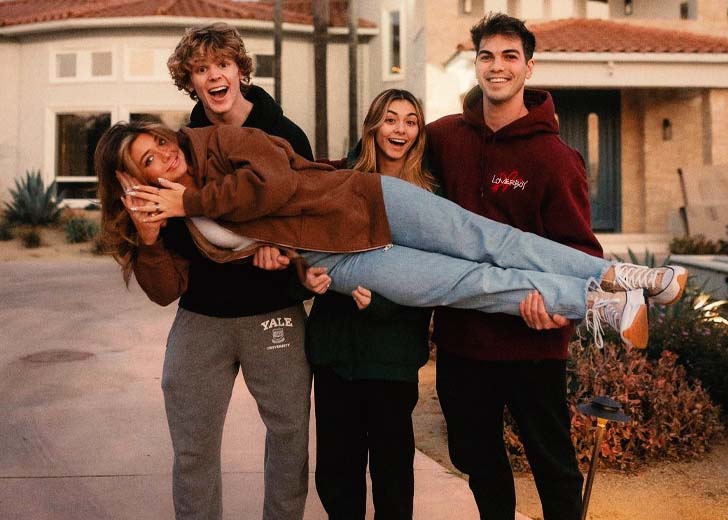 A new TikTok star has joined the Hype House and her name is Tabitha Swatosh.

On Wednesday, February 2, 2022, Swatosh took to her Instagram handle to announce the exciting news among her followers. She posted a series of pictures alongside fellow Hype House members: Jack Wright, Thomas Petrou, and Petrou’s girlfriend, Mia Hayward.

In the first picture, she was being held in the air by Wright and Petrou, with Hayward in the middle. The second picture was with Wright only, and the third one was a group picture with Wright, Petrou, and Hayward in front of the Hype House residence.

Since joining the Hype House, Swatosh seems to be having a good time, as seen through her recent Instagram stories and TikTok videos.

In her recent Instagram story, she was seen laughing and enjoying at the beach at night with Wright.

Fans react to Tabitha Swatosh’s addition to the Hype House

After Swatosh broke the news of her addition to the Hype House, several fellow internet personalities and TikTok stars as well as fans took to the comment section and filled it with well-wishes.

TikToker Brooklynne Webb was among the first ones to congratulate her. Besides, Webb was so excited that she dropped two comments. One was, “YES YAY TABITHA!!!” and the other was, “OMG !!”

Talking about her fans’ reactions, one wrote, “Congrats so excited for you.”

“OH MY GOD YES!!! I LOVE THIS SO SO EXCITED,” wrote another.

Similarly, one fan referenced the recent debut of Hype House on Netflix and wrote, “Can we get a Netflix season 2 [of Hype House] with you on it?!?!”

Going by all of that, it’s pretty sure that Swatosh and her followers are quite happy with her joining the Hype House. Not only them but the Hype House members are also excited for Swatosh’s addition.

The official Instagram handle of the Hype House and Petrou posted the same pictures shared by Swatosh to welcome her. Additionally, Wright and Hayward shared those posts via their Instagram stories.

Swatosh is an aspiring model and former beauty pageant winner who went on to garner massive fame as a content creator.

Speaking more of her past life, it’s reported that she was a former Miss Merry Christmas 2017, Missouri Teen 2018, and Fair Queen 2018. Later on, she transitioned into TikTok and began making lip-sync and other content.

As of now, she has garnered more than 9.9 million followers and 387.7 million likes on her tabithaswatosh TikTok handle. She also has a self-titled YouTube channel where she shares long content — has over 1.38 million subscribers and 386 million views.

Born in 2000 in the United States, Swatosh is presently 21 years of age. She celebrates her birthday every year on August 25. As per her date of birth, her zodiac sign is Virgo.

She is private about her family life and rarely shares anything about them. Nonetheless, it’s reported that she has a younger brother named Blake and a younger sister whose name is undisclosed.