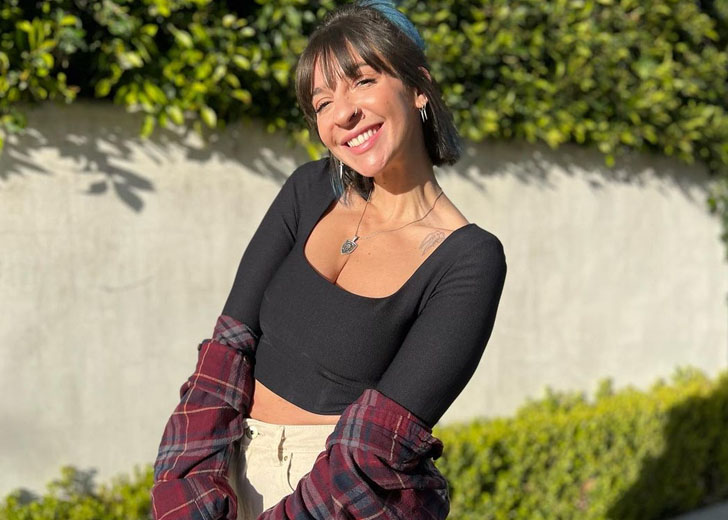 Everything about Gabbie Hanna’s social media deletion, controversies, and more!

YouTuber Gabbie Hanna is known for many things. Among them, one is for being one of the most controversial YouTubers.

Over the years, she has been involved in multiple online feuds with several influencers. As a result, many had tried to “cancel” her many times and even started petitions to delete Hanna’s YouTube channel.

One of the most signed petitions was started by Justice Right — 23,109 people have signed it out of 25,000 signatures. Similarly, the backlashes resulted in the YouTuber losing several of her subscribers and online followers.

And all of it seems to have taken a toll on her. Due to that, Hanna surprised everyone by taking down all of her social media handles and YouTube channel on October 18, 2021. Her drastic action resulted in some being happy, whereas some were sad.

However, it was later known that she didn’t completely delete everything. Social Blade showed that her main YouTube channel still had the same number of collective views. It meant that she only hid the videos.

Similarly, all of her Instagram posts might have been privatized or hidden, excluding her IGTV videos which were still visible to her followers. As for her Twitter handle, her tweets were gone, but one could still see her liked tweets.

And although Hanna’s decision to completely leave the internet came as a shock to many, it wasn’t very shocking if we knew all the facts.

Gabbie Hanna had previously hinted at leaving the internet

As mentioned earlier, Hanna received several backlashes, and many even bullied her.

That might be one of the reasons why she left the internet. The other reason might be her mental health issues, about which she had been a bit open in the past.

In her YouTube video of May 22, 2020, titled ‘Watch Somebody Burn and Crumble,’ she talked for a while about how her mental health and well-being were affected by all the online trolls and backlashes.

Hanna addressed the hate she received and explained that others twisted everything she said or did. Additionally, she had pinned one comment on that video – written by herself.

The comment read, “At this time in my life, my main and only focus was to regain my mental health and not allow myself to reach a place of self-harm. Difficult emotions take a lot of time, patience, energy, and thought to process and heal from.”

“Thank you for being a supportive community that can hold space for me and isn’t afraid to see me when I feel most vulnerable,” she added.

Likewise, before her surprise exit from the internet, she had given one one-liner statement to DramaAlert. The host, Keemstar, later shared the statement on Twitter — it read, “I left the internet.”

The host also gave his personal opinion on Hanna’s leave and wrote that the YouTuber was bullied non-stop by many Tea channels who were lying about her.

As for if Hanna is back on the internet or not, she is already back. Besides, just a few days after disabling her social media handles, on October 22, 2021, she released a new music video — it went on to receive a lot of hate.

Some of Gabbie Hanna’s controversies

Hanna has been a part of several controversies since she attained the limelight. One of the first ones was in 2017, when she made a video about her classmate who passed away due to a drug overdose.

The thing there was that she didn’t consult the dead classmate’s family before making the video. Then, after being criticized for making the video, she made another follow-up video where she apologized to everyone.

One year later, the YouTuber had started to promote a free set of makeup brushes – except the shipping wasn’t free. But that wasn’t the problem, as several users of the product complained that the brushes were poorly manufactured.

Some even said that the product started to shed after using it for the first time, and some people never received their product. That led people to criticize Hanna for promoting such a bad product.

However, instead of apologizing, she blamed the people who bought the product. In a video, she said, “Are they these amazing, high-quality, can’t-even-believe-it, great brushes? No. I also never said they were. I’m not sure what quality people were expecting when they paid $10 for 10 brushes.”

Another topic of discussion floated around in 2019 when the YouTuber allegedly told Trisha Paytas’s then-boyfriend, Jason Nash, that Paytas had herpes. Paytas immediately denied the accusation.

Additionally, Hanna had to apologize for making a tweet that read, “If I could be any animal I’d be a beyonce.”

In the same year, Hanna got involved in what could be said as her most serious controversy. YouTuber Jessi Smiles – real name Jessi Vasquez – accused her former boyfriend, Curtis Lepore, by saying that he raped her in 2013.

Gabbie Hanna has been a part of several controversies (Photo: Instagram)

Note: Buzzfeed reported that Smiles had filed a case against Lepore in 2014 but dropped them just a month later after Lepore pleaded guilty to the charges.

Smiles also claimed that Hanna knew about it and still maintained a friendly and professional relationship with Lepore. After Smiles revealed such a thing, many started to label Hanna as a “rape apologist.”

Several fellow content creators and other followers started to turn on Hanna and call her manipulative and calculating.

Similarly, Hanna also faced backlash for her problematic behavior on the sets of Escape the Night. Joey Graceffa and Daniel Preda revealed that the YouTuber acted just like a diva, fought with colleagues, made several unreasonable requests about the food she was given, etc.

In an interview with Buzzfeed, Hanna responded about all of it and said, “Who didn’t I apologize to. I gave Jessi Smiles an apology. I gave Beyoncé an apology. It feels like I’m always dishing out apologies and I’ve never once received one, and that to me feels a little chaotic.”

She also admitted that she wasn’t always on her best behavior in the past. And that she has a “neurological disorder that was unchecked, and I wasn’t taking care of my mental health.”

Furthermore, she revealed that she was recently diagnosed with ADHD and C-PTSD (complex post-traumatic stress disorder) and that that disorder has often caused her to be impulsive. Hanna also said the condition had affected her short-term memory.

On December 15, 2021, two of the most controversial social media personality – Perez Hilton and Gabbie Hanna – sat down to discuss the cancel culture on the 19th episode of Red Table Talk: The Estefans’ first season titled ‘The Cancel Culture Epidemic.’

And as both of them have several hates and have been canceled multiple times, they were the best to discuss the topic. Hilton and Hanna had quite the feud while they were on the Facebook Watch show as they discussed the cancel culture.

The controversial YouTuber appeared in the middle of the 24 minutes and 42 seconds long episode and immediately disagreed with Hilton’s discussion with the Estefan sisters.

Hilton had mentioned in 2010 that he would stop doing things that would prevent him from getting canceled. But as he hadn’t done so, Hanna called Hilton a hypocrite.

She said, “You sound like such a hypocrite. You’re still doing things that you got canceled for. But you know you don’t have to say anything about [expletive] anyone? Like, you can just shut your mouth, and that would be cool too.”

Following that, Hilton started with his own things about Hanna, saying that people say the same thing about her as they say about him. He also pointed out her recent controversy and said that the public has accused her of “very hurtful, cruel, and toxic things.”

The two went on for a couple of more discussions before ending their feud. They eventually started to talk about the cancel culture and being canceled. Hilton opened up about people finding cancel culture “sad and interesting.”

Adding more, Hilton said that people get canceled after disagreeing with what the other person thinks. Hanna also agreed with Hilton and noted that there isn’t “enough love in disagreement.”

The episode ended with the Estefan sisters agreeing with both Hilton and Hanna.

Posted on December 9, 2021December 10, 2021
Photo: Tia Alannah Borso/Instagram Michael Stickler, aka Mike, rose to fame through the TikTok content that he made alongside his now ex-wife, Kat Stickler,...
Read More