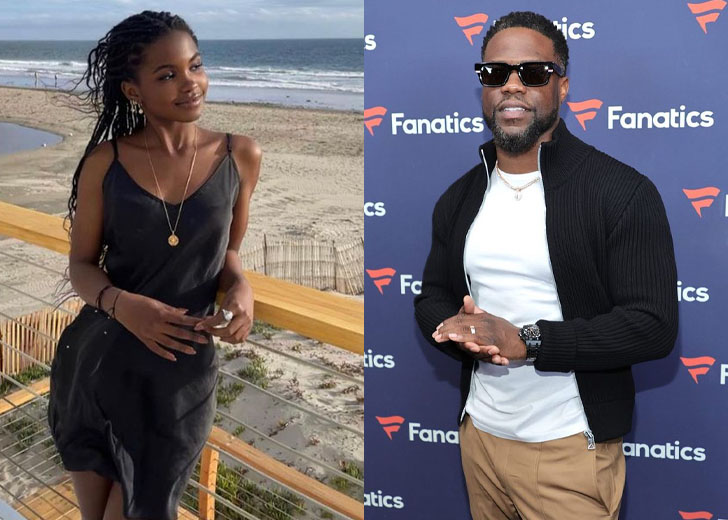 Actor and comedian Kevin Hart is a father of four from his two marital relationships.

Kevin Hart just loves his children and is a proud father of them.

Among his four children, Heaven Hart is the eldest of all and has been following in her father’s footsteps. First-borns are always special to parents, whether a son or a daughter. The same could be said here too.

Kevin’s love for his eldest child (and daughter) was again seen in his recent Instagram post. On Sunday, March 20, 2022, the actor took to his Instagram handle to share two pictures of her daughter in which she looked beautiful as ever.

In the caption, he mentioned that his daughter Heaven is the definition of beautiful, and he loves her and is very proud of her. He also motivated his first-born to strive for greatness and give the world a “major dose of you and all of ur DOPENESS.”

Friends and followers of the Jumanji: The Next Level star chimed in into the comment section of that post. They agreed to Kevin’s comment about her daughter and dropped down lovely comments.

Similarly, another mother of four, Kate Hudson, commented, “Wow! You blink, and they do that!”

Recently, on February 16, 2022, Kevin was interviewed by Extra TV’s Katie Krause. During that chat, Krause brought up the topic of his oldest daughter learning how to drive and how he was feeling about that.

In reply, he said, “I mean you know time flies. You look up and you know it’s almost over. So, my daughter’s 16, that’s my heart, best friend, you know.” He then mentioned that his daughter is looking for college now.

“Now we’re talking about college. We’re talking about life as an adult. So, as a parent, you really do forget how you can blink in and the days be going, you know. In this case, I’m just proud of her, love the woman that she’s becoming, excited for the things she’s going to do in life, and just kind of taking them in.”

Previously, on July 5, 2021, Kevin had posted a selfie of him sitting at the side-seat of his car while Heaven was learning how to drive. Captioning his post, he wrote, “My little girl is growing up.”

Similarly, in May 2021, he opened up that his daughter – who will turn 17 on March 22 – was working as an intern in his company. That was when he showed up on The Ellen DeGeneres Show.

Additionally, during his appearance in The Late Late Show with James Corden in January 2019, Kevin mentioned that Heaven was growing up to be just like him and could do a very funny and exact impression of him.

Last but not least, the Philadelphia, Pennsylvania native considers his eldest daughter as his best friend and shares almost everything with her. And one of the hardest things he shared with her was the 2017 news in which Kevin admitted to having cheated on his second wife, Eniko’ Parrish’ Hart – who was pregnant with his first child.

Recalling that moment during Red Table Talk with Will Smith, he said, “You’re never prepared for that side of it. Having a little girl in my life, it’s tough. You don’t realize the impact that your mistakes can truly have. When the kids get involved, it’s a different feeling.”

He then said that his oldest daughter, Heaven, was tough on him, and she still is. “Getting my daughter to understand that I was sorry, that I made a mistake – that was real. Through my public debacles, I’ve got on some armor. It’s very hard to bother me.”

He continued, “But when your child shows disappointment, shows emotion, shows, ‘I don’t understand why,’ and you’ve got to have those conversations – [your] head drops for the first time. You realize there’s an emotional cord that nobody else has the privileges of ever touching.”

Kevin also talked about co-parenting with his ex-wife Torrei Hart and the mother of his first two children – Heaven and Hendrix Hart. He stated that he is very lucky to have two amazing mothers for his children.

“Me and my first wife, we’ve had our ups and downs. But we’re in a great space of understanding,” he added.

Kevin Hart and his first wife got married in 2003, and Torrei filed for divorce in February 2010 – their divorce was finalized in November 2011. Years later, in August 2014, he proposed to his present and second wife, Eniko Parrish. They got married on August 13, 2016.