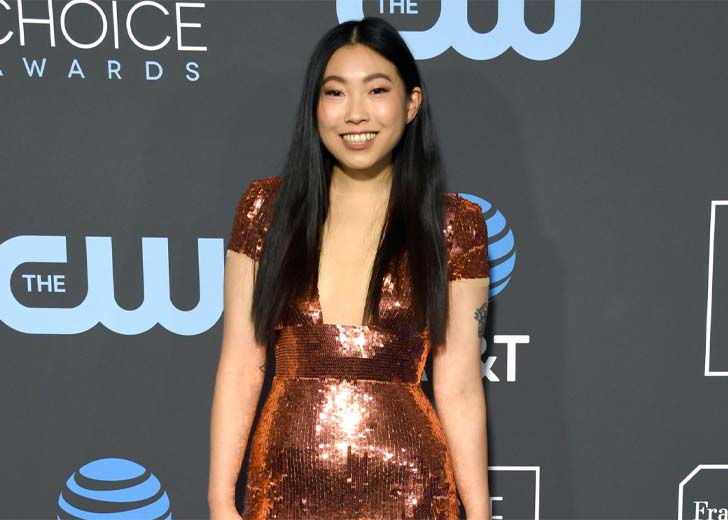 Nora Lum, professionally known as Awkwafina (pronounced Aquafina), is one of the fastest-rising personalities in the acting industry, with some hit movies and TV shows under her acting credits. Some of them are Crazy Rich Asians (2018), Jumanji: The Next Level (2019), and The Farewell (2019).

While her professional life is vividly known among her fans, her personal life details aren’t much clear. The American actress/rapper has managed to keep most of the information about her romantic life in the darkness.

But although she prefers to keep those details up to herself only, she has shed some light on them during her interviews with popular news outlets such as Vogue and The Guardian.

Her First Date Was Under Peer Pressure

The 2020 Golden Globe Award-winner’s first date was when she first graduated from college. In an exclusive video with Vogue magazine in 2018, the actress opened up about that first date, which she went on due to peer pressure.

Awkwafina mentioned that all of her friends were in a relationship and had boyfriends during that time, and she really wanted to prove to herself that she could also have a boyfriend.

Later, her friend set her up on a blind date. The actress recalled the man being cute, exactly her type, 100 pounds, five foot two with the body of a graphic designer. Although she liked the man initially, her mind changed afterward.

She stated that she didn’t like his meal choice, which gave her the first red flag. She continued by saying, “It became boring. He would take about libertarianism, he would talk about how the Chinese market is like where to go to put your money in. I don’t give a shit… I realized that I started to pretend to understand his psychopathic ramblings. I wanted to sound smart.”

Following a couple of more dates, she introduced the man to her friends. To make him unlike her, she also pretended to be someone else, with different behaviors. Eventually, the man also realized that she wasn’t interested in him.

Ending that relationship chapter, she said, “We took a taxi ride home, and that was pretty much our breakup ride. There was mutual ghosting, which is dope.”

She Claimed to Be In a Long-Term Relationship

On June 17, 2018, the Raya and the Last Dragon actress gave an exclusive interview with The Guardian. During that interview, she talked about many things, from her professional life to family life.

Among all those things, she also talked a little about her personal life. She mentioned that she was in a blissful relationship with her long-time boyfriend. “I’m extremely happy. I’m in love,” said the 33-year-old actress.

While continuing the same sentence, Awkwafina also went on to state that although she is in love and is happy, she is not sure if she will ever be the kind of woman who can retire into a family.

I’m not sure I will ever be the kind of woman who can retire into a family.

However, she didn’t give any details on who her partner is. Additionally, following that interview, the comedian/TV host hasn’t mentioned her partner. She also has not shared any pictures alongside her long-time boyfriend.

This has led many fans to believe that she might have parted ways from her undisclosed boyfriend. Nonetheless, nothing can be said without an official confirmation from the actress herself.

Who Is Awkwafina Dating Now?

The star of Marvel Studios’ soon-to-be-released Shang-Chi and the Legend of the Ten Rings has always kept her personal life away from the media and her social media handles.

Due to her secrecy, it is unclear if the 5 feet 1-inch tall actress has broken up with her long-time boyfriend or is dating a new man as of this moment. However, many outlets report that she is currently single.

Awkwafina boasts a huge net worth thanks to her illustrious career as a multifaceted persona, with a career as an actress, comedian, TV host, rapper, and author. Celebrity Net Worth reports that the star of Awkwafina Is Nora from Queens, currently has a net worth of $8 Million.

Related Topics:AwkwafinaMarvelShang-Chi and the Legend of the Ten Rings
Up Next