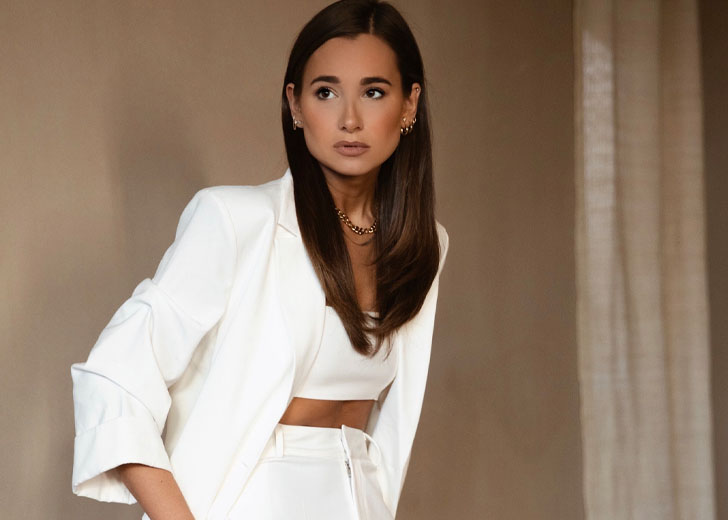 If you search the name Danielle Bernstein on google, you might get multiple articles of several controversies regarding Bernstein on the first page itself. It’s so because the American fashion designer has been the talk of the town on various occasions.

All of that is due to her professional works, but some have proven quite controversial. For years now, Bernstein has been working as a fashion designer and founder of the blog and brand, WeWoreWhat.

And in those times, she has been accused of copying ideas or designs of several other brands — some cases have even reached the court. But that’s not it, as she has also sparked controversy via Instagram over weight loss and “bad body image.”

Bernstein has gained praises for her works – apart from her stealing other brands’ designs – and her beautiful body. She often shares pictures of her donning some branded clothes and in bikinis.

However, much to her fans’ amusement, she revealed that she uses photo-editing tools to remove unwanted things from her body in her pictures and enhance it. She mentioned these things in her Instagram post of July 8, 2020.

On that Instagram post, Bernstein had attached a picture of herself wearing a white and brown colored bikini accompanied by a black shirt and goggles. Her head was directed towards the sky as she enjoyed the sun.

In the picture she had posted, some stretch marks were quite visible on the upper region of her right thigh. Captioning the first line, she wrote, “Me, myself, and my unedited body.”

As Bernstein continued, she said she wanted to open up about the body image issues she had as an adult. “And I honestly can’t believe how liberating it felt. Why has it taken me so long to talk about this?⁣” she added.

Bernstein then wrote that she had constantly been working on self-love while being under the lens of millions of people and their points of view. She said her journey hasn’t been easy, but she realized that sharing this part of her life is as important as sharing other aspects of her life.

“I’m far from perfect and am not saying I won’t smooth out a stretch mark here or tuck in some bloating there, but I hope by opening up and sharing my vulnerabilities, it will show that you’re not alone.”

In the end, she stated that she was here for her well-wishers and thanked them for being here with her, as they always have been.

Just two months before this Instagram post, in May 2020, Bernstein had published her autobiography titled This is Not a Fashion Story: Taking Chances, Breaking Rules, and Being a Boss in the Big City.

She also mentioned the reason behind her such decisions — a disapproving boyfriend and her growing popularity. Between that two things, she began to feel like “the real me” wasn’t good enough.

Danielle Bernstein was criticized for showing how to hide cellulite

Just over a month after her Instagram post, Bernstein made another post on the photo-sharing platform on August 25, 2020. She had shared two pictures of herself, but they differed from the poses, background, and lighting.

In the caption, she mentioned that it was the same outfit and body but different lighting in the two pictures. She then urged her followers to swipe to see the exact difference a small lighting difference can make in one’s photo.

“The first has the sun behind me, so I’m back lit, and it’s more flattering. The second is direct sunlight which shows my cellulite. Both are beautiful, but a quick 180 can dramatically change the look. Just thought I’d share #uneditedbutfiltered.”

The post quickly started another debate as many believed there was no difference between the two photos she posted. It was also said that there was “no distinguishable cellulite,” and Bernstein was criticized for “reinforcing oppressive beauty standards.”

Under her post, one Instagram user had commented, “Such a slap in the face to people with actual body issues, especially mental ones that can’t be conveniently photoshopped out.”

“I thought she was gonna compare them artistically, and I was like ‘oh yes, of course, the second one is better,’ but then she’s talking about cellulite? What cellulite???” another user wrote.

Furthermore, one user tweeted, “This backfired big time. My legs have cellulite no matter what I do, and I don’t really think about it, but seeing her point it out makes me self-conscious. I think to myself, ‘is this something I should hide?'”

Bernstein hasn’t responded to any of these comments yet. And considering it happened more than a year ago, it’s highly likely she will ever address the critics.

Coming over her weight, it has been reported that Bernstein weighs around 54 kg or 119.05 lbs.

Jay Hayden's Realistic Acting in 'Station 19' Started Gay Rumors — But Is He Gay?