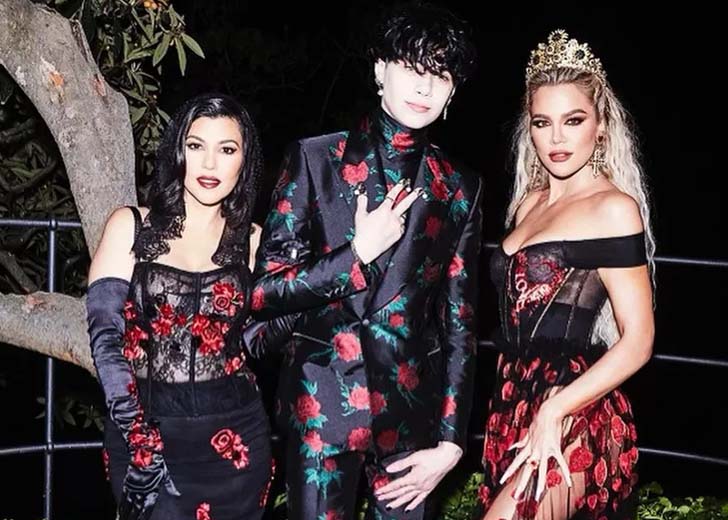 Travis Barker and Kourtney Kardashian’s wedding celebration is still going on, and Travis’ oldest child Landon Barker, aka Landon Asher Barker, has joined in the frame as well.

On Tuesday, May 24, 2022, Landon took to his Instagram handle to share a couple of snaps that seem to be taken at a party after Travis and Kourtney’s wedding.

Joining Landon in the frame were his new stepmother Kourtney Kardashian Barker and Kourtney’s younger sister Khloé Kardashian. “Wedding week,” Landon captioned the pictures along with a red heart and rose emojis.

Talking more about the pictures the young rapper posted online, the first picture showed him donning an expensive black-colored Dolce & Gabbana suit with red flowers designed all over it — the flowers seemed to be rose. Additionally, there were rings all over his fingers.

The second picture was a selfie of Landon only that showed a closer look at the reality star and his outfit. The third and the last photo was one of the highlights of the entire Instagram post.

Landon was standing in the middle with his new stepmother standing on his right and Khloé on his left. He was showing a peace sign as the two ladies posed for the camera normally.

Speaking of the outfits the ladies wore, Kourtney’s clothing was a bit identical to Landon’s one. She was wearing a black dress as well with red flowers designed all over it. Additionally, she had a netted top and a full-hand black glove that matched the design of her dress.

As for Khloé, she wore a black-colored netted dress that was filled with red heart shapes. Gold-colored Christian earrings were on her ears and a crown of the same color on her head.

All three of them looked fabulous and their dressing sense was praised by many in the comments section. Jacari, a friend of Landon, wrote, “That suit,” which was followed by a rose emoji and a fire emoji.

Furthermore, one Instagram user sent the best wishes to Travis and Kourtney as they head into a new journey. “Best of wishes to your Dad n new Mum,” they wrote under Landon’s post.

Going by that, it seems like Landon has full support for his father’s new marriage. And his participation in the wedding’s after-party proves so.

Travis and Kourtney shared the wedding vows in a religious wedding ceremony on May 22, 2022. The ceremony was held in Portofino, Italy. However, they were already officially married on May 15, 2022, in Santa Barbara, California.

The rumors of their togetherness first originated in late 2020 and it was made official in January 2021. Several months later, in October 2021, the two got engaged. On April 3, 2022, they tied the knots in an unofficial wedding in Las Vegas.

On the other hand, Kourtney was in two on-again, off-again relationships. The first one was with Scott Disick (from 2006 to 2015) and the second relationship was with Younes Bendjima (from 2016 to 2020).