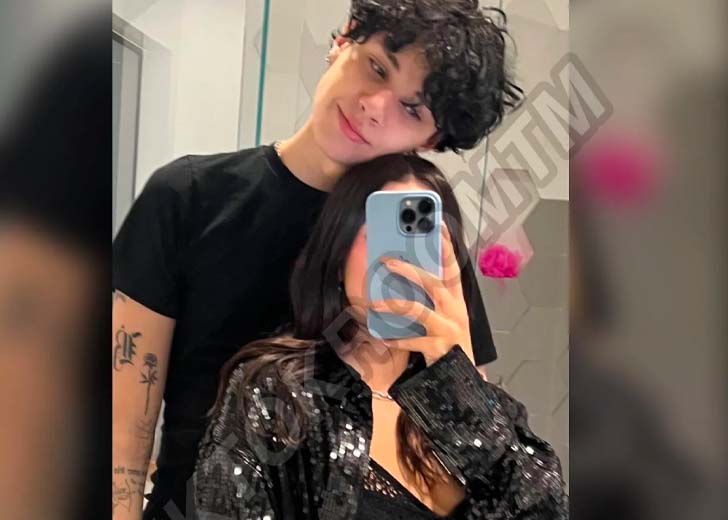 Things are getting more serious between Landon Barker and his new girlfriend, Charli D’Amelio.

On Saturday, July 9, 2022, the rapper took to his Instagram story to share a cute picture taken alongside his girlfriend. The photo was a mirror selfie taken by D’Amelio in her bathroom.

The newest couple of the town looked great in all-black outfits as Barker wrapped one hand on D’Amelio’s waist and laid his head on her head.

However, moments after he shared the picture on the photo-sharing platform, he deleted it due to unknown reasons. But some eagle-eyed fans were keen enough to take a screenshot of it, including the Instagram handle of The original Tiktokroom.

When the tea page posted the picture saying, “Posted and deleted by #landonbarker,” several fans were in awe as they went down to the comment section and praised the cuteness of the couple.

One wrote, “they’re actually cute hold on,” with another user following up with, “his smile is everything.”

“This is cute cause Landon rarely smiles in pics in general but he’s smiling with her,” another Instagram user commented.

Similarly, there were many users who second-guessed if the girl in the picture was actually D’Amelio as her face was hidden by the phone. Nonetheless, other Instagram users clarified that it was D’Amelio as it was her phone, and the bathroom looked identical to D’Amelio’s.

Barker and D’Amelio’s dating rumors started on June 15, 2022, after the pair were photographed together while leaving Barker’s party for his collaboration with boohooMAN. The saga of their public appearances continued a couple of times.

And it was fueled when fans noticed that the then-alleged pair had been tattooed at the same time by the same tattoo artist. Finally, on June 27, a source came forward to People Magazine to confirm the relationship.

The source had told the outlet that they were spending time together. “They’re seeing each other, and it’s early stages,” the source added.

One day later, a source told US Weekly that Barker and D’Amelio’s romance is “very low-key,” and they are “having fun hanging out and getting to know each other.”

And on the fourth of July, D’Amelio made her relationship with Barker Instagram official. The TikTok star took to her Instagram handle to share several pictures taken alongside her boyfriend and other friends at Fanatics CEO Michael Rubin’s Independence Day party.

Besides that, there were several more pictures in which the couple was seen together. And while they were not necessarily PDA-filled images, it’s good enough to say that the post made her relationship with Barker Instagram official.

Furthermore, on the one hand, Barker and D’Amelio are getting closer and closer; on the other, the D’Amelio family is making a good relationship with the Barker family.

When Barker’s father, Travis Barker, was recently rushed to the hospital due to pancreatitis, the D’Amelio family sent their well-wishes and a bouquet to Travis. Along with the flowers, there was a note that read;

“Travis, Kourtney [Kardashian], and family- Sending healing and positive vibes after such a scary situation you all went through!” And the note was signed by Charli, Dixie, Heidi, and Marc D’Amelio.

The Blink-182 drummer later shared a picture of the flowers and note via his Instagram stories as he thanked the whole D’Amelio family.