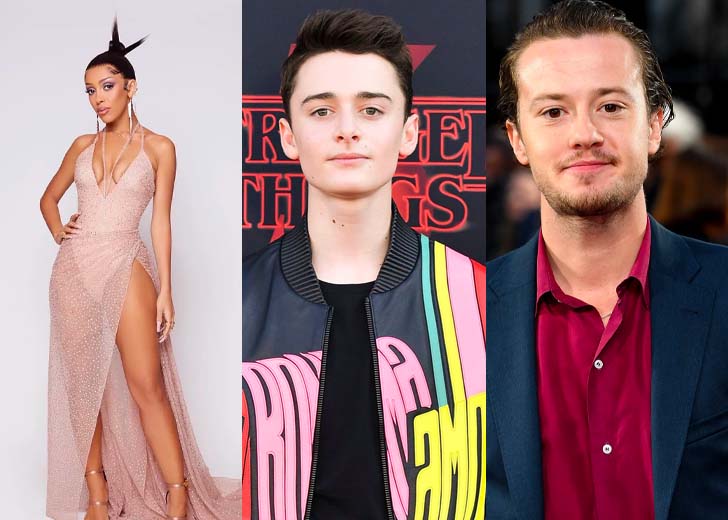 “Noah can you tell Joseph to hmu. Wait no. does he have a gf?” Doja Cat asked Noah Schnapp.

Doja Cat has fallen in love with Stranger Things season 4 and probably with the show’s newcomer Joseph Quinn.

And we can say that if we take a small look at her recent Twitter activity and Noah Schnapp’s TikTok video, which was uploaded merely over two hours ago at the time of writing.

On Thursday, July 7, 2022, the Stranger Things star took to his TikTok handle to share a video featuring his conversation with Doja on Instagram.

The conversation was first started by Doja, who asked Schnapp if he could tell Quinn to hit her up. She then immediately asked him if Quinn had a girlfriend or not. She had texted, “Noah can you tell Joseph to hmu. Wait no. does he have a gf?”

In reply, Schnapp told Doja to slide into Quinn’s Instagram DMs. But Doja said she doesn’t know Quinn’s Twitter or Instagram handle. Additionally, she was confused about whether Quinn even had an account on social media to slide into his DMs.

Doja Cat might have fallen in love with Joseph Quinn as she wants him to hit her up (Photo: TikTok)

Thankfully, Schnapp was there to save the day as he shared Quinn’s official Instagram handle with Doja and wrote, “Right here ma’am.”

In his TikTok video, the American actor initially used a clip originally made by a TikTok user going by the username of taradanto. The user says, “Your mom,” as she points out a reply by Doja on a picture of Quinn. “She’s just like me,” was written over the video.

After taradanto’s video ended, Schnapp attached the above-mentioned conversation he had with Doja. Captioning his TikTok video, he had written, “thirsty doja.”

Before Schnapp revealed his conversation with Doja, Doja had already shown her attraction toward the Stranger Things newcomer Joseph Quinn. For instance, on May 30, 2022, she took to her Twitter handle and wrote, “joseph quinn fine as shit.”

At the time, the rapper was binge-watching the new season of Stranger Things, as millions of people worldwide did. And due to that, many people believed that she might be amazed by Quinn’s performance as Eddie Munson.

But her recent activity on Twitter says otherwise. On July 6, 2022, one fan went down on one of Doja’s tweets and posted a picture of a hot-looking Quinn by saying, “Doja look how fine Joseph Quinn is.”

“It’s [expletive] criminal” was Doja’s immediate reply to the picture. However, as it seems, she has deleted her reply. Nonetheless, with Noah revealing his conversation with Doja, her impression of Quinn appears clear; she likes Quinn.

But will they start dating each other? Have they talked yet? Or does Quinn even know he is being hitten up by Doja, and she thinks he is hot? The answers to the first two questions remain unknown for now as not much is revealed.

As for whether or not Quinn knows about Doja’s comment on him, the answer is positive. When Netflix’s Instagram handle posted a screenshot of Doja’s tweet of May 30, 2022, over Quinn’s photo, it was liked by Quinn among other stars, including Schnapp.

Doja’s tweets were already enough to make Quinn’s name trend on Twitter. And Schnapp’s TikTok video added fuel to the fire as Quinn’s name started trending on the platform, with more than 51,600 tweets already posted as of this writing.

One Twitter user posted, “imagine being joseph quinn right now… THE doja cat hitting up your co-workers just to get in touch with you.”

Likewise, one user wrote that it might be all fun and games right now until Quinn and Doja actually start dating.

“I can’t sleep at night knowing doja cat has her eyes on Joseph Quinn; one single picture of them and I’ll kill myself violently,” another user tweeted.

Furthermore, one fan girl of Doja and Quinn wrote that if Doja and Quinn actually get together, she will cry in mourning and joy by knowing that “the sexiest couple alive will have been created.”