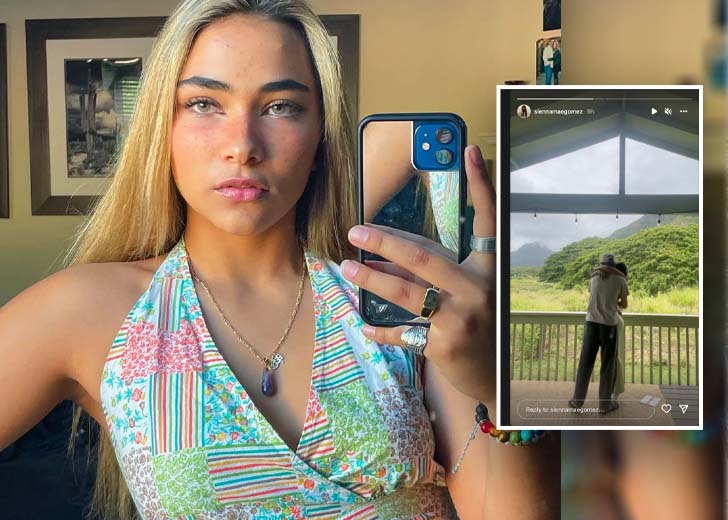 Sienna Mae Gomez currently has kept her boyfriend under wraps.

Sienna Mae Gomez is relishing her time in Oahu, Hawaii, and giving her company is her alleged new boyfriend.

On Sunday, June 3, 2022, the social media star took to her Instagram stories to share a short clip in which she is standing on what seems like a balcony from where there is an excellent greenery view.

As she stood there, she turned a bit backward and got hugged by a boy. And many believe that the boy in the video is Gomez’s new boyfriend. However, the face of her alleged boyfriend isn’t seen, and thus, his identity remains unknown.

Right after that story, Gomez reshared a quote from an Instagram page that read, “One day you’ll realize that God was putting it all together the whole time.” The quote might be referring to her newfound love as well as her return to social media after a long hiatus.

Coming back to her alleged boyfriend, it’s already established that his face wasn’t shown in the video, due to which his identity, including his name, is unknown. However, it might be possible that the two might have been dating for a while.

It could be said so because Gomez hadn’t revealed anything about her personal life since her last relationship with fellow TikTok star Jack Wright — a relationship due to which she got a lot of backlashes as she was accused of sexually assaulting Wright.

Additionally, she was getting canceled due to those allegations — many of which Gomez had declined — and she ultimately had to leave social media for a long time. She finally marked her return to social media on May 29, 2022.

And as all those allegations and backlashes were there, and they still are, Gomez might have kept her new relationship hidden from the outside world until now. However, as nothing is confirmed, it remains to be seen when Gomez and her alleged new boyfriend actually started dating.

Moreover, this isn’t Gomez’s first vacation to the same place in Oahu, Hawaii, as she has been there multiple times over the past few years. So, it could be said that Oahu, Hawaii, is her go-to place or second home.

Her first post in Oahu, Hawaii, was seen on December 24, 2021. Similarly, on June 24, 2022, she posted a TikTok video made at the same place with the caption, “THE VIEW!!?” Under that post, Gomez’s friend, Summer Colmus, had commented, “maybe you should come back for this view!!”

In reply to the comment, Gomez said she misses Colmus and will visit the place soon. And as promised, she went there in late June 2022 and posted a picture from there on June 30.

And one more picture from the same place was shared on Sunday, July 3, 2022 — the same day she posted a short clip with her alleged new boyfriend. So, it could be assumed that she visited the place with her partner.