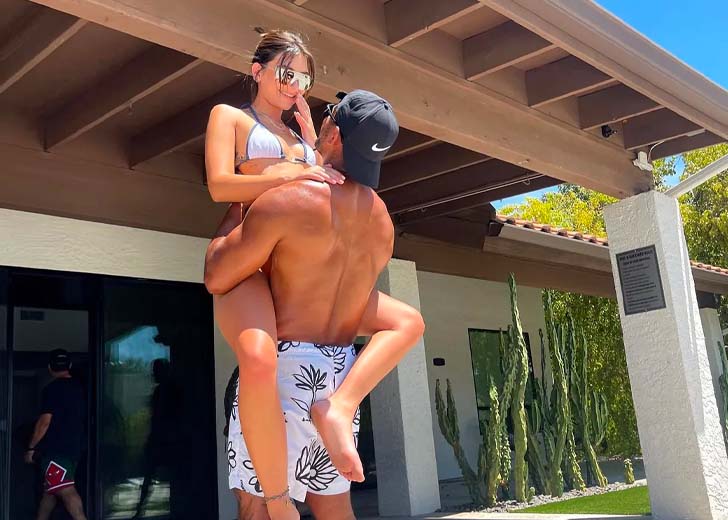 Mads Lewis and her boyfriend Kevin Mejia are apparently vacationing in Scottsdale, Arizona.

And the TikTok star has done that by sharing a PDA-filled picture via her Instagram handle. On Sunday, July 3, 2022, Lewis posted a picture where Mejia was carrying Lewis up on his chest as they locked their eyes.

Lewis was wearing a white bikini with green straps, whereas Mejia was wearing white shorts only that had designs of leaves. “te amo,” Lewis captioned her post with a heart sign attached.

Moments after she posted the picture, it was liked by her boyfriend — who is also her gym trainer. However, he didn’t leave any comment. Instead, he shared Lewis’ post via his Instagram stories but covered the faces with a big heart-shaped eyes emoji.

In addition, Lewis had shared a very short clip via her Instagram stories. In the video, she and Mejia were seeing toward the camera, with Mejia’s hands on Lewis’ buttocks. As Lewis turns towards her partner, Mejia slides up his hands toward Lewis’ waist. Mejia had also reshared that clip on his Instagram stories.

A couple of hours before Lewis made the post, she had taken to her Instagram stories to reveal that she and her partner were traveling to Scottsdale, Arizona, by air. She had shared a picture of Mejia sleeping on the plane with the location tag of Arizona on his face.

As for what the couple was doing at Scottsdale, Arizona, Mejia’s most recent Instagram story revealed they were there to celebrate the birthday of their mutual friend Miranda “Randy” Fauntleroy.

Lewis and Mejia were reported to be romantically involved in May 2022 after knowing each other for a while — Mejia is Lewis’ gym trainer. On May 16, 2022, the couple and their friends were seen out at Disneyland, but Lewis and Mejia’s pictures were enough to say they were dating.

And while many were supportive of their relationship, many showed their disregard by mentioning the age gap between Lewis and Mejia — Lewis is 19 years of age, whereas Mejia is around 29.

Despite the big age gap and the criticisms, the duo’s togetherness seems to be going well. And with Lewis posting a PDA-filled picture with her boyfriend on her Instagram feed – she only shared stories – it’s certain that their bond has already become stronger.