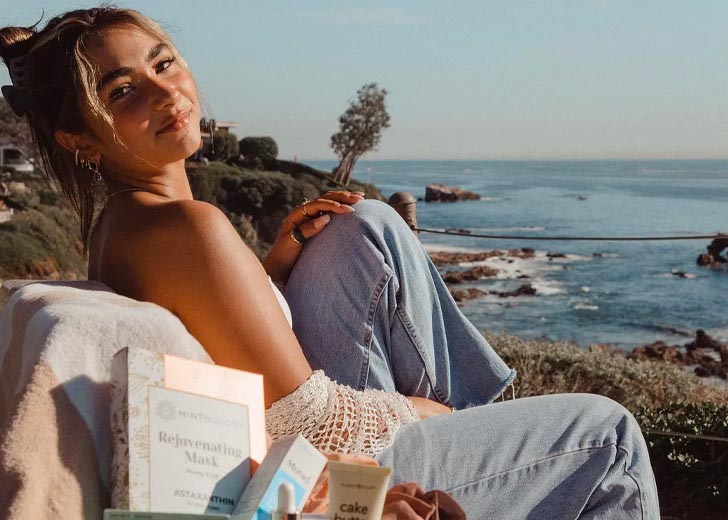 Sienna Mae Gomez, or simply Sienna Mae, has marked her return on social media after months of disappearance. But fans are not happy about it.

On Saturday, May 28, 2022, Gomez returned to social media and shared a video everywhere. On YouTube, she titled the video, ‘I hope they cancel me,’ whereas, on Instagram and TikTok, she simply wrote, ‘she lives.’

However, netizens are angry over her return. And one of the reasons behind their anger is that Gomez had left all of the social media platforms after her former boyfriend and colleague Jack Wright had accused her of sexual assault.

The accusations were backed up by several other people, leading the netizens to heavily backlash Gomez and cancel her. All of that eventually resulted in Gomez disappearing from social media from mid-January 2022.

To mark her return to social media, Gomez had shared a 56-second long video featuring herself chilling on a beach. The video opened with a line that read, “This video is brought to you by cancel culture.”

Singer Dominic Fike’s ‘Cancel Me’ was used as a background song and one of the lyrics read: “I hope they cancel me (why?). So I can go be with my family (why?). So I can quit wearin’ this mask, dog (damn). Tell the people, “Kiss my ass, ” dog (yeah, yeah).”

And although some hardcore fans of Gomez were thrilled to see the TikTok star return to social media, many people weren’t happy. And when the Instagram handle of TikTok Insiders shared the news about her return, the comment section got filled with negative comments.

“She was crying in her room for like 6 months now it’s ‘I hope they cancel me.’ sit down,” another commented.

Similarly, several users had taken to their respective Twitter handle to share their thoughts. One tweeted, “Sienna Mae is coming back to the internet as casually as she is.. that’s [expletive] insane. She committed to SA and called it cancel culture publicly????????? are you stupid or dumb?”

“Sienna Mae making a joke out of being cancelled when she literally SA’d someone infuriates me so much,” another tweeted.

Furthermore, one Twitter user wrote, “the absolute NERVE of sienna mae, girl you are not a victim of cancel culture you COMMITTED A CRIME.”

Why was Sienna Mae canceled?

As mentioned earlier, people on the internet started canceling Gomez after her former boyfriend and colleague Jack Wright, also a member of the Hype House, accused her of sexual assault. Here is a brief look at everything!

Wright and Gomez were good friends who used to collaborate on multiple projects. As their friendship went on, they even began dating. But, their relationship only lasted for a brief period.

Despite their breakup, the two continued to collaborate and make content. Later, in Spring 2021, a close friend of Wright, Mason Rizzo, opened up about what exactly happened between the former couple — in a since-deleted Twitter post.

Rizzo mentioned that Gomez had been sexually assaulting Wright on multiple occasions despite his disagreement and Wright setting up boundaries in their relationship. Similarly, he also alleged that Gomez had told Wright to kill himself and that Gomez had a history of being verbally abusive.

In another tweet, Rizzo talked about why he deleted his original tweet and said that the concerned parties had agreed to handle the whole situation offline.

After those allegations, Gomez had taken to her Instagram handle to state that the allegations were false. In a since-deleted Instagram post, she had written, “Friends fight and relationships sometimes change, but allegations of a criminal act are not to be thrown around loosely.”

A collage picture of Sienna Mae Gomez and her former boyfriend Jack Wright (Photo: The Sun)

She continued, “Making an untrue sexual assault claim is never okay. I’m beyond saddened by this situation. In order for all of us to move forward, I will be taking this offline with Jack. Thank you to all who have reached out with love and concern.”

Despite all that, Gomez continued to receive backlash and people started to cancel her. The fire spread further when Wright opened up. On January 20, 2022, Wright posted a video on his YouTube channel titled ‘what Sienna Mae did to me’ and accused Gomez of sexual assault.

In the video, Wright agreed with everything that his best friend, Rizzo, had mentioned in his deleted Twitter post and further said that Rizzo had witnessed almost everything that had happened.

As he continued, Wright mentioned other things that Gomez had done. When he uploaded that video, Gomez went on to upload an apology video and stated that she hadn’t understood what she did at the time.

However, things got much worse when Wright’s brother and friend also started talking about what Gomez had done to Wright. They said that she had verbally abused, sexually assaulted, and manipulated Wright.

A since-deleted video also showed Gomez kissing an incapacitated Wright as Gomez’s hands went down on Wright’s body. When people realized what she was doing, they immediately stopped her.

Several more complaints emerged against Gomez. Wright again went on to accuse Gomez of breaking into his house several times and then attacking him.

In the end, Gomez went on to decline all of the accusations. However, that wasn’t enough for her to lose millions of followers and multiple sponsorship deals with several brands. Fans started to cancel her and later on, Gomez disappeared from all of her social media handles.

And now that Gomez had returned to social media, fans are still enraged over all the accusations made against her.