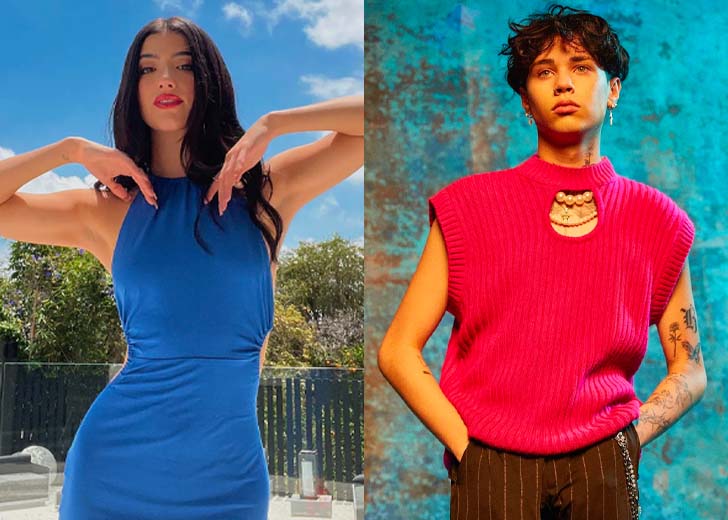 The two had recently gone to the same shop to have a new tattoo.

It has been a few confusing weeks for Charli D’Amelio and Landon Barker‘s fans as rumors of the two internet stars dating keep spreading.

The speculations first started on June 15, 2022, when a paparazzi going by the username of shootingstarsla on Instagram posted a series of pictures of D’Amelio attending Barker’s party.

The party in question was thrown to celebrate the launch of Barker’s recent project — he had collaborated with the fashion company boohooMan to launch his co-designed collection.

Additionally, several guests were invited to the party, where the American singer sang multiple songs, including the hit music Die in California. Later, D’Amelio was seen leaving the party, and her departure was followed by Barker and make-up artist Avani Gregg.

When that happened, people immediately started wondering if something was going on between D’Amelio and Barker. One fan commented under shootingstarsla post, “I think something is going on between them. They weren’t that close before. He is Chase’s friend.”

Shootingstarsla was quick to give a reply as they wrote, “yea so true that’s how they all start wearing each other’s stuff that’s the Sign.”

Sometime after the talks of the two internet stars dating started, its hype became higher when some netizens noticed that Barker’s friend and D’Amelio’s ex-boyfriend, Chase Hudson, had deleted the picture he posted with Barker.

One Twitter user commented on that news: “Chase deleted his pic with Landon. If Chase deleting his post with Landon is not confirmation that something is happening, u guys are just in denial. I’m sorry.”

D’Amelio and Barker’s romance rumors became more firm after their fans noticed that the two had recently gone to the same shop to have a new tattoo.

On Tuesday, June 21, the internet stars took to their respective Instagram handles and posted pictures of their tattoos via Instagram stories. And what’s more interesting was that they had posted their respective stories simultaneously — the difference was around 3 minutes.

In addition, both of them had tagged the same person, meaning they got inked by the hands of the same person, i.e., Arbel. D’Amelio’s new tattoo was a small heart and a star, which she reportedly got to mark the release of her first perfume Born Dreamer.

As for Barker’s new tattoo, he had gotten himself a tattoo of thorns around his neck. He also had inked a bird and had written the name ‘Cooper’ below it. It might be possible that he got the tattoo honoring the late Cooper Noriega, but the exact reason remains undisclosed.

Coming back to D’Amelio and Barker, many believed that the two getting inked at the same place and sharing their new tattoos among their followers at the same time was no mere coincidence and thought that something might be happening between them.

On the other hand, some people believed that nothing was going on between D’Amelio and Barker, and they only went to the same tattoo artist, Arbel, because she is one of the talented artists in Los Angeles visited by multiple celebrities.

One day after the tattoo incident, on June 22, the rumored couple was again spotted together, this time when they were leaving the A Letter To Me album release party. The Daily Stardust had shared multiple pictures of the two as they left that event.

Now back to the main question: Are D’Amelio and Barker dating each other? The answer to that question is yet to be known.

Neither of them has officially confirmed or denied romance rumors. And until that happens, nothing can be said. For now, fans of the two stars must wait and see what happens.

And although the rumored couple mightn’t have said anything on the topic, the speculations have caught the BFFs podcast‘s attention. On their recent episode of June 23, 2022, the hosts of the podcast discussed a bit on the whole topic.

Co-host Dave Portnoy first mentioned all the details that have led to the rise in the speculations — which have been discussed above. And when he completed doing that, he asked his co-hosts Josh Richards and Bri Chickenfry if they were dating.

Chickenfry was the first to respond as she said, “I don’t know. They kinda look like they would be a cute couple.” Richards then joined and said that Barker seems like D’Amelio’s type considering her former relationship with Chase Hudson.

Contradicting his co-hosts’ opinions, Portnoy said that D’Amelio might not date Barker. But, Chickenfry quickly stopped Portnoy there as she said, “but you know what? So, Landon Barker is like in the Kardashian family now. So, I think it’s kind of a good move.”

“Clout move,” Portnoy said in the background, to which Richards seemed to agree. “They are all gonna be together. It’s like one step closer to the Kardashian. Climbing the ladder,” Chickenfry further added.

Following that, the co-hosts talked a bit more about the topic and then changed their focus toward other topics. So, what do you think? Are D’Amelio and Barker dating? Or it’s just another baseless rumor? Let’s wait and see!