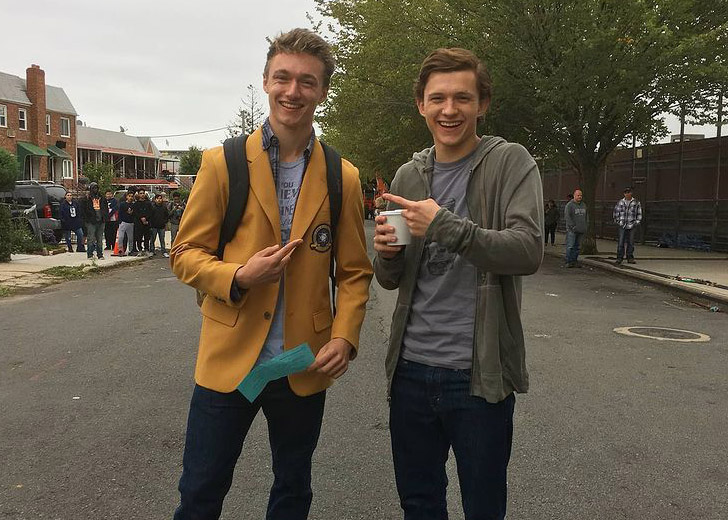 By this point, most people around the world knows who Tom Holland is. The British actor is known worldwide for portraying the role of Peter Parker/Spider-Man in the Marvel Cinematic Universe.

His recent portrayal of the character in the third installment of the Spider-Man movie — Spider-Man: No Way Home — has created a buzz worldwide. Some critics have even regarded the movie as “The Best Marvel Movie Till Now,” and its success in just 4-5 days proves so.

Now that Holland has become a renowned superstar, there isn’t much privacy in his life. Several things about him are known publicly, including his friendships with co-stars like Zendaya (also his girlfriend), Jacob Batalon, Jake Gyllenhaal, and his three brothers.

Nonetheless, there are still certain things related to the actor that everyone might not know, such as his best friend, Harrison Osterfield.

Who Is Harrison Osterfield?

Holland’s best friend, Harrison Osterfield, is a fellow British actor who has been working hard in the entertainment industry. Some of his known acting roles are Snowden in Catch-22 (2019) and Leopold in The Irregulars (2021).

In addition, he has worked as the personal assistant of the Spider-Man star in his Marvel projects. Due to that, in 2018, he got the opportunity to appear as a small cameo in one of Marvel’s hit flicks, Avengers: Infinity War.

How Did Tom Holland and Harrison Osterfield Met?

However, not everyone is Osterfield. The now best friends first met each other when they were enrolled at the BRIT school, a London-based performing arts and technology school.

They became good friends and eventually became the best of friends. Their friendship continued even after they left the BRIT school. Later, when Holland was cast as the new Spider-Man in Sony and Marvel’s joint deal, the actor called up Osterfield to be his personal assistant.

Although the deal was only for two movies, the pair continued to work together in more than two movies. Their bromance could also be seen through their respective Instagram handles, where they often share pictures on each other’s birthdays or other occasions.

For instance, on November 2, 2016, Holland took to his Instagram handle to post a picture with Osterfield in which both of them were dressed alike in Burberry fashion. “Thing one and thing two. Hahah,” he wrote in the caption.

The two were recently seen at the premiere of Holland’s new Spider-Man movie. Though they weren’t photographed together, Osterfield shared some of his pictures and one of Holland’s from the premiere and congratulated his best friend on the success.

Well, all of that clearly shows how much love there is between the two friends, and it even proves that they are not only each other’s best friend but brother too!

Harrison Osterfield Is 25 Years of Age

Born in 1996 in Kent, England, Osterfield celebrates his birthday on July 4 every year. His birth name is Harrison John Osterfield (nee. Davy), and his zodiac sign is Cancer.

He is the son of Brian Osterfield and Phil Osterfield. Besides his parents, he has a sister named Charlotte Sparrow, who is reportedly seven years younger than him.

On December 7, 2019, the actor lost his father. The heartbreaking news was confirmed by Osterfield and his sister a day later via Instagram. They had shared a post confirming the news and paying a short tribute to their father.

As time passed, the Osterfield family has been getting over the grief.

Is Harrison Osterfield Single or Dating?

The 5 feet 10 inches tall actor is presently in a romantic relationship with his longtime girlfriend Gracie James. They have been dating since June 2021 and made their relationship official on their first dating anniversary.

On June 16, 2021, Osterfield shared a picture with his girlfriend, with a red heart emoji and “#1Year” written on the caption. Several friends, including Holland, took to the comment section to congratulate the couple.

The duo has been together to this date and has strengthened their bond over the years.