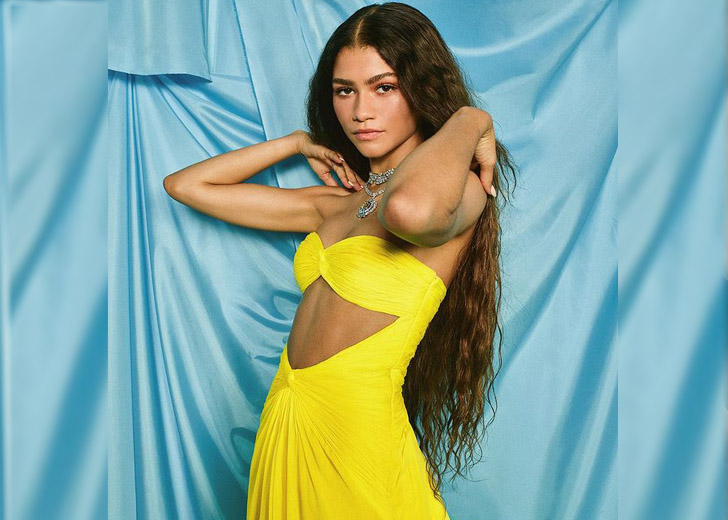 Zendaya is a woman of many talents. She is a talented actress, singer, dancer, and author.

She first rose to fame after she starred opposite Bella Thorne in Disney Channel’s dance sitcom Shake It Up, where the pair played best friends from 2010 to 2013.

Afterward, she gained widespread fame for portraying the role of Michelle Jones in the Marvel Cinematic Universe’s Spider-Man franchise. She has also acted as K.C. Cooper/Bernice in the TV series K.C. Undercover, and Rue Bennett in the TV series Euphoria.

How Tall Is Zendaya? Her Height and Weight Details

The Spider-Man: Far From Home actress, Zendaya has an athletic build body. She reportedly stands at a towering height of 5 feet 10 inches (1.77 meters).

The actress is a fitness freak who likes to do yoga and follow other fitness tips to keep herself fit and healthy.

Zendaya Is Taller than Her Boyfriend Tom Holland

While the Euphoria star is 5 feet 10 inches tall, her on-screen as well as off-screen boyfriend, Tom Holland, is two inches shorter than her — he is reportedly 5 feet 8 inches tall.

Despite the 2 inches height difference, the couple isn’t anyway bothered about it.

Recently, they even talked about it while promoting their new movie, Spider-Man: No Way Home, in which Holland is Peter Parker/Spider-Man and Zendaya is Parker’s girlfriend, MJ aka Michelle Jones-Watson.

During their promotion, they made an appearance at the Sirius XM Town Hall event, where the host Jessica Shaw pointed out their character’s kiss and how the audiences noticed that Zendaya was taller than Holland.

In reply, the Spider-Man actor responded with, “Not that much taller. Let’s put this out there. Maybe like an inch or two at best. It’s not like, people say like, ‘How did you guys kiss? It must have been so difficult.’”

Upon the reply, the host clarified and said, “What I’m saying is I’m always fascinated by — because it’s such a misogynistic thing that like, ‘Oh my God, the woman [is taller],’ and it is so problematic.”

“It’s a stupid assumption,” Holland said, mentioning that the difference in their height would cause any issue.

Zendaya also agreed as she said, “This is normal, too. My mom is taller than my dad. My mom’s taller than everyone.”

The actress then talked about the kiss they shared on-screen and said, “It’s a nice sweet moment between them.”

Around a week before that, on December 3, 2021, the pair were promoting the same movie on The Graham Norton Show. In there, they revealed a funny moment created by their little height difference during the filming of the third Spider-Man movie.

Zendaya stated, “There’s a particular stunt where Spider-Man swings us on top of a bridge, and he places me there. He’s supposed to gently rest MJ on the bridge and walk away from her. Because of our height difference… we were attached, so I would land before him. My feet obviously hit the ground before he does.”

Holland continued her story and said, “So Zendaya would land. And I’m the superhero, I’m supposed to look cool. And I would land and my feet would swing from underneath me and then she would catch me.”

“It’s so nice to be caught for a change,” the English actor laughingly added.

Following that, they even gave the audience a demo of what had happened and continued to talk about other stuff.

Zendaya Belongs to a Mixed Ethnicity

The California native is the daughter of Kazembe Ajamu Coleman and Claire Stoermer. Her father Kazembe is African-American, with roots in Arkansas, while her mother has German and Scottish ancestry.

Both her parents worked as teachers but they have a part-time job, too. Her mother is also a former house manager at the California Shakespearian Theatre whereas her father now serves as her manager.

In 2016, Zendaya’s parents decided to part ways and ended their married life.

Zendaya’s Real Name Was Given to Her by Her Father

Zendaya was born on September 1, 1996, and hails from the suburbs of Oakland, California. She goes by the full name, or real name of Zendaya Maree Stoermer Coleman.

The actress’s first name ‘Zendaya’ has a special meaning for her as it is given to her by her father. Her father, Kazembe, gave her first name after being inspired by the African Shona tribe’s word, which means “to give thanks.”

My dad had a thing for Z’s and zen, so he helped name me Zendaya.

Speaking of her education, Zendaya first attended Fruitvale Elementary School. After that, she got enrolled at the Oakland School for the Arts. Then, she joined the CalShakes Conservatory Program and the American Conservatory Theater.

Furthermore, the Shake It Up TV series actress’s zodiac sign is Virgo. And, as per some beliefs, a Virgo achieves great success but knows how to stay humble, which perfectly matches Zendaya’s personality.

She Was Born With One Less Tooth

Everyone has a special mark of their birth, and for Zendaya, it’s her teeth. While having a conversation with Variety in 2017, she revealed that when she went to the dentist for a regular check-up, she found out that she was born with one less tooth on the bottom row.

She also jokingly said she didn’t have to take out her wisdom teeth on the bottom as she already has enough space.

“I went to the dentist and I found out I was born with one less tooth on the bottom row,” she added. “So I don’t have to get my wisdom teeth taken out on the bottom because I have enough space.”

Her Career: Movies and TV Shows

If you look into Zendaya’s career, it could be noticed that she has achieved great success. However, she was just another struggling actress during her starting days, hoping to get a breakthrough role.

Zendaya started her career in 2010, after making her appearance as Rocky Blue in the TV Series Shake It Up (2010-13). In the following year, in 2011, she appeared in a short video titled ‘Bella Thorne & Zendaya: Watch Me’ before starring in the TV Series entitled Good Luck Charlie (2011).

However, even after that, she only managed to amass a handful of fan following. But, that was to change as she got chosen to portray the role of K.C. Cooper / Bernice in the now-hit TV show ‘K.C. Undercover’ (2015-18).

Zendaya’s career got more boosted after she played the character of Michelle “MJ” Jones in the Marvel Cinematic Universe’s (MCU) Spider-Man: Homecoming (2017) and Spider-Man: Far from Home (2019).

Zendaya’s brilliant portrayal of Rue Bennett’s character in the show Euphoria (2019-20) even landed her a Primetime Emmy Award in 2020 for “Outstanding Lead Actress in a Drama Series.”

Zendaya’s recent release was the Netflix movie, Malcolm & Marie, released on February 5, 2021, starring alongside John David Washington, and preparing herself for reprising her role of MJ in the third installment of MCU’s Spider-Man franchise.