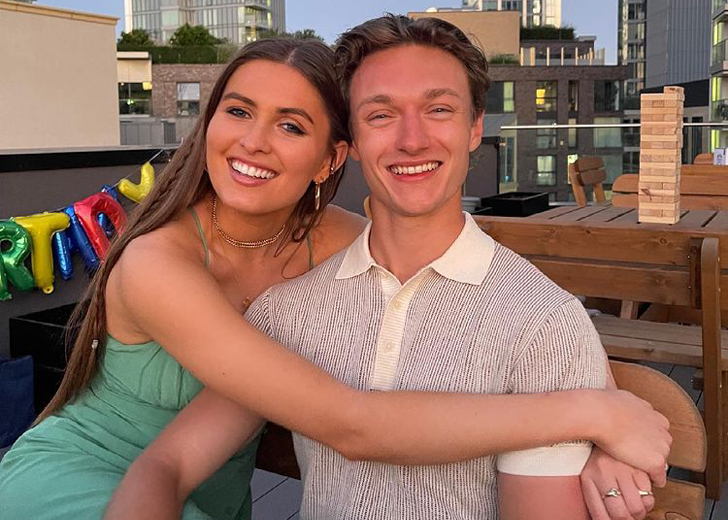 It’s official! Harrison Osterfield is in a relationship with Gracie James.

The Irregulars actor made his relationship with his UK-based girlfriend Instagram official on June 16, 2021, with an adorable picture.

The girlfriend, James, put her hands around Osterfield while both gave a big smile to pose for the photo.

The 24-year-old actor chose a special day to confirm his relationship, as he completes one year of togetherness with her. “#1year,” he wrote alongside the adorable snap with a red heart emoji.

The likes of Tom Holland, Nell Hudson, and Kevin McHale took to the comment section to congratulate the couple.

And while the actor had kept the love story private from his side, his fans had a hint of the possible fling through his girlfriend’s social media. James occasionally posted pictures with her actor boyfriend on Instagram and fans were just waiting for the confirmation.

On December 20, 2020, she shared a beautiful monochrome picture with Osterfield, where both looked into each other’s eyes. The picture described their chemistry and love more beautifully than any words could ever have.

“They are dating?” one fan was quick to ask in the comment.

Taking on the occasion of their first dating anniversary, James also shared a picture and a video on her Instagram Stories. In the first story, a picture, she shared another monochrome picture, where Osterfield was kissing around her neck.

She mentioned him in the story and dropped “1” signed emoji that signified the completion of their 1 year together.

In the second story, she shared a video where they were doing some sort of exercise sitting on the ground. “Thanks for cracking me up. Love you big time,” the text in the video read.

Prior to this, Osterfield not publicly involved in a relationship. Neither anything about James’ previous relationship is known.

Who Is Osterfield’s Girlfriend Gracie James?

James is a 25-year-old England native, who has over 12 thousand followers on Instagram. She celebrates her birthday on December 9 every year.

She completed her graduation in drama from the University of Leeds in July 2017.

After completing her education, she worked as the production crew in the 2019 movie Last Christmas starring Emilia Clarke and Henry Golding.

Her father, Peter James, is a property agent, while her mother’s name is Jane James. She also has a younger sister named Amy James.

On the other hand, Osterfield is an emerging actor who is renowned for his role as Snowden in 2019’s Catch-22. He has also appeared in Spider-Man: Homecoming, The Irregulars, Chaos Walking, and Avengers: Endgame.