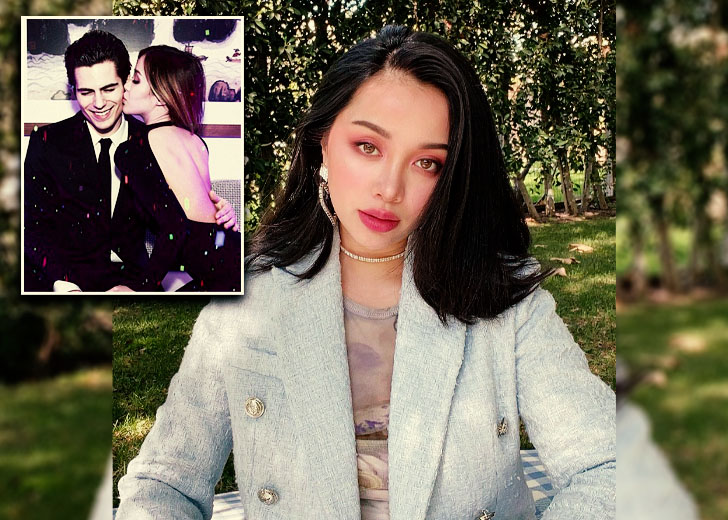 Michelle Phan is an American-born makeup artist and YouTube personality of Vietnamese origin. She has garnered over 8.84 million subscribers on her self-titled YouTube channel since joining the platform on July 19, 2006.

Phan’s whole professional career is listed out very clearly all over the internet. However, it is her personal life details that have made people wonder. Ever since she returned from her hiatus in late 2019, she has been very quiet about her romantic life.

Before the hiatus, she was romantically seen with her long-time boyfriend, Dominique Capraro, a dancer, and model. They seemed inseparable as Capraro usually appeared on Phan’s YouTube videos.

But, it has changed now as Capraro is completely missing from Phan’s social media images as well as from her YouTube videos.

The YouTube star first met Capraro during her visit to the romantic city of Paris, France. While she was in a Parisian cafe, completely confused by the French-language menu, Capraro appeared and helped her.

In their very first meet, they spent hours in that cafe and talked about several things. While they were about to leave, they shared emails and phone numbers to keep in touch. The next day, Phan returned to the United States, with memories of Capraro in her heart.

In her YouTube video of February 14, 2014, the entrepreneur mentioned in the description that they were apart for two years but managed to work out a long-distance relationship. In the video, she also mentioned how both of them would make out time to talk and share their favorite music, clothes, and so on.

Following two years of a long-distance relationship, Phan and Capraro finally got to meet each other. They reunited in Paris and kissed each other for the first time under the Eiffel Tower. Later, Capraro moved to Los Angeles to be alongside his girlfriend.

Phan’s Haitus and Her Relationship Gossips

After Capraro moved to the United States to live with Phan, they were always seen together. They traveled around different places, took pictures for social media, and made videos for YouTube. Capraro often accompanied his partner during her Q&A videos too.

However, everything was changed when Phan took a break from YouTube and social media in 2015. She left everything without leaving any message, leading some people to speculate that she might have died.

Fortunately, the gossip never turned out to be true as she posted an update video on YouTube on June 1, 2017. She revealed that legal troubles and several other reasons were behind her long break.

Additionally, in the video’s description, she noted, “I’ll return when I’m inspired to share new ideas.” On September 15, 2019, she finally made her return after almost 4 years of break.

Following her return, one of the major things her fans wanted to know was her relationship with Capraro. Sadly, all of the questions have been left unanswered, leading people to believe she has parted ways with him.

The speculations of her breakup were further fueled when it was noticed that she had neither shared any pictures alongside him on her social media nor mentioned him on her YouTube videos.

While some believe that Phan has broken up with Capraro, some believe the couple got engaged and will soon be a husband and wife duo, but they have kept the details private. The rumors of the couple’s engagement were once again the topic of discussion in recent times.

Nevertheless, all of the talks have been limited to only gossips, and it hasn’t been confirmed by Phan. As for Capraro, he seems to be maintaining privacy by keeping his Instagram handle on private mode.

Neither of them has been spotted with another man/woman, and it is reported that both of them still follow each other on Instagram. In addition to that, all of the videos of Phan and Capraro are still available on YouTube.

Considering all of that, it might be safe to say that the long-time couple is still together, and they are only keeping the details of their relationship away from the eyes of the media and public.

Posted on August 31, 2022August 31, 2022
Josh Gates and his ex-wife Hallie Gnatovich lived apart for more than a year and a half before getting divorce.
Read More