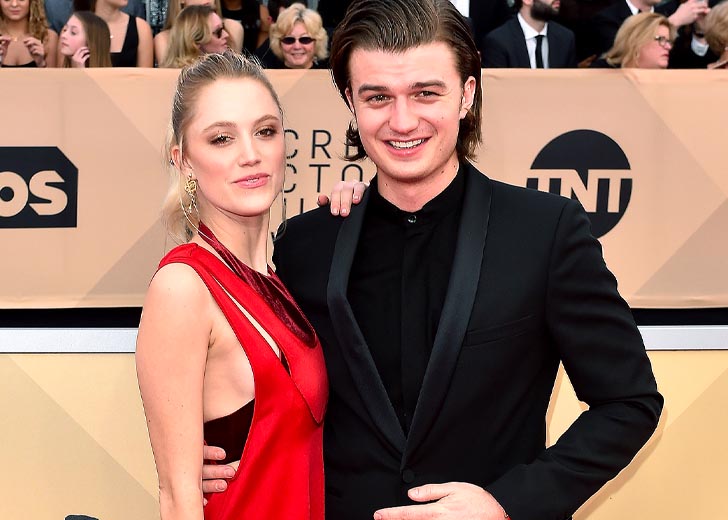 Joe Keery was making the headlines in 2021 for his performance as the nerdy game developer Walter ‘Keys’ McKey in the action-comedy movie Free Guy. And now, he is back with the thing that made him known to the world.

The thing here is Netflix’s original series Stranger Things in which Keery portrays the role of Steve Harrington. He has reprised his character once again in the Stranger Things season four Volume one — which was released on Friday, May 27, 2022.

Fans have been loving Keery’s performance as the guy who is unlucky with women, babysits kids, and occasionally saves the world. However, when it comes to the actor in real life, one among those three things doesn’t apply — the unlucky with women one.

In fact, Keery has been in a long-term relationship with his lovely girlfriend Maika Monroe. Here is a look at the couple’s relationship!

Occasionally when a person goes to hang out at a Los Angeles-based party, they might not have the idea that they would meet someone who would become an integral part of their lives. Keery might have thought the same before going to a certain party in 2017.

Sometime in 2017, the American actor went to attend a party in Los Angeles. There, he went on to meet his future girlfriend Maika Monroe. After their first meeting and hanging out together for a while, they felt connected and eventually started dating.

However, their relationship is quite private, to this date, which could also be seen on their respective social media handles. Since they started dating, they have kept things under the wraps, but not on all occasions as they would occasionally step out together, such as a normal outing or a grand event.

On October 26, 2017, they went public with their relationship as they walked down the premiere of Stranger Things season two. The tradition continued as Keery and Monroe walked side by side during the premiere of season three of the Netflix hit show on June 28, 2019.

Later, when the world shut down due to the global pandemic, the duo would wind up together in their residence in California. During his conversation with GQ Magazine in August 2021, Keery talked about the moment he and his partner spent during the pandemic.

He said, “Over quarantine, it was like we spent so much time together, which was rare. I mean, that’s one of the disadvantages of dating someone else in the industry.”

“There are advantages as well: somebody who kind of understands what’s going on with you in a pretty deep way. But yeah, I think she’s like me. She doesn’t take it all too seriously,” he added.

Similarly, the actor talked about the gold necklace that his partner gifted him. “I found it while we were traveling, and then it busted. For Christmas, she got it remade for me.”

After that, there have been numerous other occasions where the couple has been snapped together, such as in New York City, at a Los Angeles Lakers basketball game, and Saint Laurent pre-Oscars event.

Keery and Monroe’s most recent public appearance was on March 27, 2022, when they showed up at the Vanity Fair Oscar party. Going by all that, it’s fair to say that the couple’s relationship is still going strong and we can expect to see more of them in the near future.

As of this writing, there have been no reports of the actor dating someone in the past. It’s due to the result of Keery’s privacy which he has tightly maintained around his personal life.

Who is Joe Keery’s girlfriend?

Like himself, Keery’s present girlfriend is involved in the entertainment industry. Maika Monroe is an American actress who is best known for her works in multiple horror movies.

Some of the horror-genre movies she has worked in include It Follows, The Guest, Tau, and Greta. Besides, for her performance in the 2014’s It Follows, she even won multiple awards and got nominated for an Empire Award.

Some other movies she has appeared in are At Any Price, Labor Day, Independence Day: Resurgence, Hot Summer Nights, After Everything, Villains, Brothers by Blood, and Watcher. After Everything is the 2018 movie in which co-starred alongside her boyfriend, Keery.

As for her TV shows, she has mainly starred in one TV show only: 2020’s The Stranger. Other than that, he has had minor roles in two TV shows: Eleventh Hour and JJ Villard’s Fairy Tales — she has only played three TV shows in her career.

Born on May 29, 1993, in Santa Barbara, California, Monroe goes by the full name of Dillon Monroe Buckley. Her parents are Jack Buckley, a construction worker, and Dixie, a sign language interpreter.