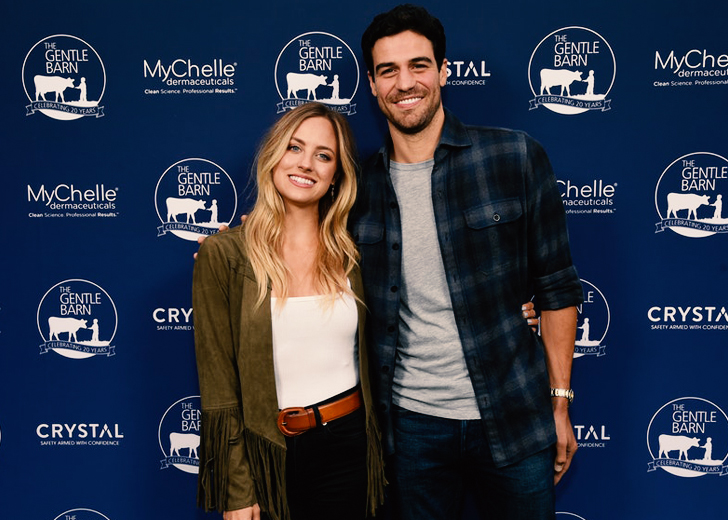 While he garnered fame from Bachelor in Paradise, it wasn’t the only thing he gained from the show as he also found a partner in the form of another contestant named Kendall Long.

Their relationship was on and off but they remained together later. However, in January 2020, they released a joint statement mentioning that they have parted ways for good.

Amabile and Long first met each other during the 14th season of The Bachelorette in the summer of 2018. Later, during the filming of Bachelor in Paradise’s 5th season, they developed feelings and fell in love.

But, even before the season ended, they parted ways. Later, in September 2018, it was mentioned that they were working on reconciling their relationship — they eventually got back together.

After being together for months, in April 2019 they announced that they were moving in together and had signed a lease together in Los Angeles. Their togetherness continued as they lived together and flaunted pictures alongside each other on Instagram.

However, it seems like they weren’t meant to be together forever. In January of 2020, Amabile and Long released a joint statement in which they stated that they have mutually decided to go on their separate ways.

Their joint statement reads, “We have decided mutually to go our separate ways. Joe has made the decision to move back to Chicago while Kendall will be remaining in her hometown of Los Angeles. Our family and friends have always been an extremely important element to who we are as people.”

It continues, “We can’t imagine continuing our lives without them closer, especially when thinking of starting a family of our own one day. We both respect each others’ decisions and still have a great deal of love for each other. We appreciate all the love and support everyone has given us throughout our relationship.”

The announcement left the couple’s shippers in shock. Later, in April 2020, when an Instagram user mentioned that Long was not “that into” her ex-boyfriend, Amabile, she was quick to give an answer as she mentioned;

“Let’s not assume my feelings. I loved him enough to see a marriage and a future. A lot is private.”

Even months after their break up, the former couple still have a friendly relationship with each other. They are often caught together spending time with each other. When asked if they were together, Long said, “We have a good relationship. It’s not romantic right now.”

The former couple is set to share the screen once again when Long makes an appearance in the 7th season of Bachelor in Paradise, which aired on August 16, 2021. As for Amabile, he has already joined the show since the start.

In some of the promos for the show, it was shown that the former couple will have some conversations together. Amabile’s possible romance with The Bachelor season 23 alum Serena Pitt was also teased in the promos.

The Former Duo Has Given Several Reasons on Their Split

Over the months, the now separated couple have given various thoughts/reasons on their split, either it is during interviews or on TV shows.

Starting off with Long, during her Down to Date podcast in February 2020, she said that, “I did not see it coming. Every relationship has issues, but I feel like — with Joe and I — we were best friends. Everything was fun, we were getting a dog together. We had just moved in … Ultimately what happened was that Joe felt like he would have a better [life] in Chicago.”

In October 2020, she told US Magazine that Amabile is a great person and she loves him for that. She also reflected on how they have gone through so much while they were together. Due to that, she has the feel to talk to him whenever she is having a hard day, and she hopes Amabile feels the same way.

Additionally, she told that she and Amabile currently have a great relationship but it is not romantic right now.

Later, in May 2021, the Just Curious author said during a podcast that it would be hard to see her ex searching for a new love during the 7th season of Bachelor in Paradise, while she is also on the show.

“It would be so hard. I would not want to watch him fall in love with someone else. That would suck so much,” she said. “I still have a tremendous amount of love for him.”

Moreover, she added, “That was the relationship, I just threw so much trust in and right off the bat was honest and open. It was the first relationship I actually saw, potentially, turning into a marriage. That was something very new for me.”

Coming into the side of the Dancing with the Stars contestant, during the premiere of season 7 of Bachelor in Paradise, in August 2021, he mentioned, “Breaking up was the hardest thing I ever had to do. Right away you have your doubts and you’re obviously upset, but I forced myself to get over her.”

When both of them were in season 7 of Bachelor in Paradise, they had an emotional conversation as they talked about their breakup happening over “logistics.”

Her statement continues, “You try to move on, but for some reason, it doesn’t feel right, and it’s hard to. … I guess the thing that was difficult for me is the reason why we broke up is not because we didn’t love each other.”

In reply to that, the owner of Chicago Grocery said, “Your whole thing was, ‘I don’t want to move anywhere for a man.’ I should’ve been more than just ‘a man’ at that point. We could’ve tried it.

Later, during the same show, Amabile, age 35, expressed his feelings towards the new contestant Serena Pitt. He said, “I’m not going to lie, I’m still at a point where I don’t know. I like where I’m at with Serena, but it’s still pretty early on. I don’t know if this is gonna work again. I don’t.

Furthermore, during a confessional, he reflected on his feelings towards his ex and stated, “I think it’s pretty clear that Kendall still loves me, but I don’t know if I still love Kendall. … I have something with Serena that I don’t want to just throw away. I don’t. I like where that’s going. This is messy.”