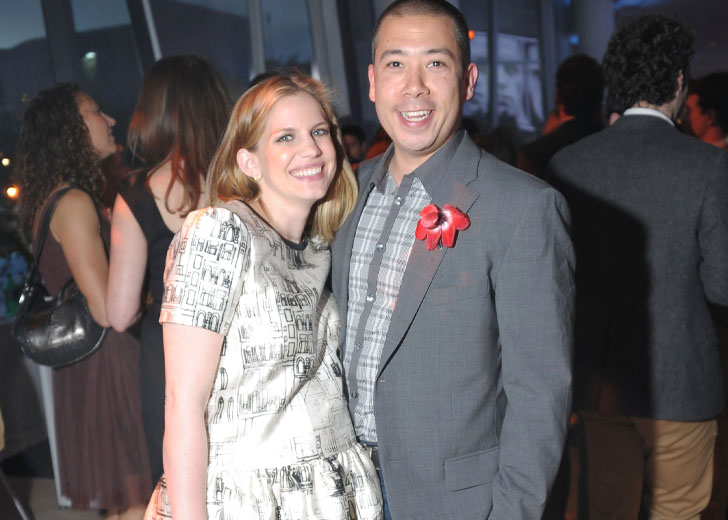 Anna Chlumsky has been on the top of the entertainment industry through her amazing performance in the movies and TV shows she plays in – the most recent being Netflix’s Inventing Anna.

While she has made a flourishing acting career, she has also maintained an equally blissful marital relationship with her longtime boyfriend turned husband, Shaun So.

Chlumsky’s husband, Shaun, is Chinese-American. He is an American military veteran and Army Reserve member who has served in Afghanistan.

Anna Chlumsky and Shaun So were college sweethearts

The Rugrats star first met her future husband while both of them were studying at the prestigious University of Chicago.

During her interview with Interview Magazine, Chlumsky revealed that she met Shaun at a dance party called Spring Fling – one of the few parties held by the University of Chicago. “We were both there. I was supposed to go with someone else, but that person had the flu, so I went by myself,” she added.

Anna Chlumsky with her husband Shaun So (Photo: Twitter)

As she went on, she said that she met all of his friends and then danced with him for like four hours. “We only knew each other’s names. Then I was expecting him to walk me home or something and he was just like, “Okay, bye.” It turns out it was because he was shy.”

On the next day, they caught up with each other again while going to Eminem and The Roots concert – they “were playing on campus.” She was in line at that concert with one of her friends. She told her friend, “There’s that guy I danced with last night.”

Chlumsky continued, “and she’s like “What’s his name?” and I was like “Shaun.” And she says, “Hey, Shaun…” and then ducked. The rest is history….”

The now-married couple eventually began dating each other. Months after being in a relationship, they began living together in Brooklyn, New York. Three years after they began dating, Shaun was deployed to Afghanistan.

Anna Chlumsky and her husband Shaun So at an event (Photo: Twitter)

Describing the long-distance relationship, Chlumsky wrote a piece on Glamour Magazine in 2014 that read, “If long-distance dating is a sport, deployment is the X Games. I’d be building a fortress around myself in order to stay strong for my soldier.”

In January 2006, Shaun returned from his deployment. But, he continued to serve in the Army Reserve for five more years. About that, Chlumsky wrote, “During a two-week leave, we had many discussions about the future — his, mine, ours, the Army’s.”

“We’d come to the conclusion that life is only better with each other in it, despite any and all uncertainties, and we’d resolved to rely on our collective stubbornness to make it for the long haul.”

Finally, in October 2007, they took a step forward and got engaged. At the time of their engagement, the actress revealed that they will get married soon in a fusion of the two cultural traditions as “Shaun’s family is Chinese, and my family is Catholic.”

Anna Chlumsky and Shaun So married in 2008

Less than a year after they got engaged, on March 8, 2008, Chlumsky and Shaun walked down the aisle with close friends and family members witnessing the ceremony held in Brooklyn, New York.

Since then, the married couple has always been together, holding each other’s hands through thick and thin. As of now, they live a low-key life and maintain tight privacy around their married life.

Years after their marriage, Chlumsky and Shaun welcomed a bundle of happiness in their family. On July 11, 2013, the duo welcomed their first child, a daughter named Penelope Joan So – Chlumsky was 32-year-old at the time of birth.

Three years later, on July 28, 2016, the actress gave birth to another daughter named Clara Elizabeth So. Interestingly, while she was pregnant the first time, she had just completed filming the second season of Veep.

And three months after her second pregnancy, she returned to the sets of Veep for the filming of the hit show’s sixth season.

Ever since the birth of their children, happiness has been doubled in the couple’s family plus some responsibility, too. The mother of two has previously opened up on multiple occasions about how her daughters have a sisterly bond and “empathize with each other.”

Anna Chlumsky and Shaun So outside of the 2018 tennis US Open (Photo: Getty Images)

Similarly, in one instance, she admitted that she loves the experience of parenthood. But, she also mentioned that her eldest daughter has taught her that “the definition of motherhood can vary from person to person.”

She continued, “This whole thing has taught me that motherhood has a wealth of definitions and identities. There’s no one way to be a mom or one way to be a ‘good’ mom.”

Going by all that, it seems like the parents of two have been doing their best for their kids. As of now, the family of four happily resides in their New York residence.