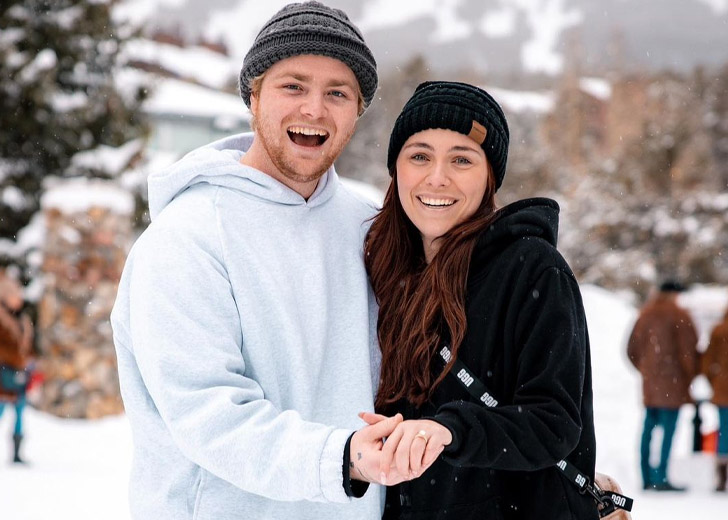 The popular content creator and Hype House star Alex Warren, 22, got the news on New Year 2023, which fans had been waiting for so long.

After years of dating and creating content together, the TikToker finally proposed to his long-time girlfriend, Kouvr Annon.

On January 1, Warren announced his engagement through an Instagram post with the caption, “I proposed to my best friend.”

It’s a video clip where he proposes to his girlfriend while both are standing on snow and wearing hoodies and caps.

He kneels on his toes, uses Annon’s full legal name, and asks her for marriage, “Kouvr Ho’oipo A Mē Kamakalāni O’anela Kahokūlani Vincent Annon, Will you marry me?” Then both hug and kiss each other, and Warren puts rings on Annon’s finger.

The post’s comment section has filled the comments from many celebrities, Hype House members, and fans congratulating them.

They met through a mutual friend

Warren and Annon have reportedly been dating since 2018. They met via Snapchat through their then-mutual friend Daynaa Marie.

Initially, they began with a long-distance relationship, with Warren living in California and Annon in Hawaii. Later Annon moved to California to join her boyfriend.

Annon posted a picture with his boyfriend for the first time in Inta in December 2018. A week later, Warren posted the same photo and captioned it as, “My lil weirdo❤️ You’re stuck in the desert w/ only one person… Tag who you’d pick!!🌴”

The Youtuber couples gained more popularity as they moved into TikTok’s The Hype House, which premiered on Netflix on January 7, 2022.

Stronger even through the ups and downs

Warren and Annon’s relationship has faced various ups and downs, and it is impressive to see them together, holding a much stronger bond.

Their former best friend Dayna Marie had posted a video where she alleged Annon was dating someone else [Tyler] even when she was in a relationship with Warren.

This led to a massive fight between the couple, and they broke up. Later, Alex contacted Annon and put a condition that they could be together again if she blocked Tyler on everything, and Annon agreed to it, and they were together again.

“Everything she said happened happened a year and a half ago. It’s already been dealt with,” Alex said on one of the Livestream. “We’ve been good.”

In the series Hype House, Alex generally is seen obsessing over content and views and trying to go viral. Sometimes he even leaves his girlfriend aside.”

Regarding this, he tweeted that he admitted that it was his fault after someone said, “The Netflix show dirty.” He was the one running for the views and never wanted to go from the Hype House.

He also admitted that he took his girlfriend for granted as he said, “I have an amazing girlfriend here in front of me who just wants to love me, and I was taking that for granted.”

The way the couple is getting stronger and closer with every passing problem, fans are already calling them couple goals. We are eager to see them get married.

All about Icy Wyatt and Girlfriend Moir Maizeng’s Relationship