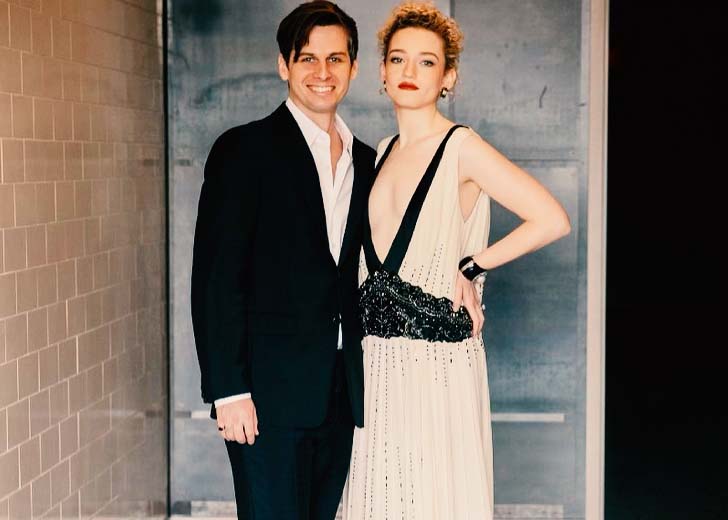 Julia Garner has gained quite the success as an actress and relishes an equally blissful marital relationship.

The Ozark actress has been married to her husband Mark Foster for over two years now. The married couple has been together through thick and thin, especially in the first few months of their marital life due to the COVID-19 pandemic.

The pandemic and lockdown was a blessing in disguise for the duo as they had a very busy work schedule following their marriage. It gave them time off their respective works for several months, which as per Garner, was a “really nice, really long honeymoon.”

But, what does Garner’s husband do for a living?

Garner’s husband, Foster, is a multi-talented person who has a career as a singer-songwriter and musician. He is best known for being the lead singer of the indie-pop band named ‘Foster the People.’

Foster started his career with a lot of setbacks. But, although he was struggling to make his own career, he went on to help other uprising artists by launching their musical careers as a producer and guest singers.

Later, in the mid-2000s, he was signed by Andy Dick as his personal composer. He worked for him for a while, and during that time, he gained mild limelight.

In 2008, he started working as a commercial jingle writer for the record label named Mophonics. While with that record label, he wrote jingles for various brands like Honey Bunches of Oats and Verizon.

Around a year later, in 2009, he released his first solo album titled Solo Songs, which consisted of nine-track albums. Then, in October 2009, he finally formed his band, Foster the People, which consisted of members Mark Pontius and Jacob “Cubbie” Fink (left the band in 2015).

Foster and his band finally gained wide recognition two years later, in January 2011, when the band’s first single, Pumped Up Kicks, almost reached the top of the Billboard Hot 100. The song eventually went on to be nominated for a Grammy Award.

Around two months later, on May 23, 2011, the band released its first studio album, Torches. The album reached number eight on the Billboard 200 and gave Foster his second Grammy Award nomination.

Fast forward to the present time, Foster has released several songs and albums, as a single and with his band too. Some of his works with his band are Supermodel, Sacred Hearts Club, Pick U Up, and In The Darkest of Nights, Let The Birds Sing.

Furthermore, he has also worked with several renowned artists such as Machine Gun Kelly, Taylor Swift, Ricky Reed, Grace Mitchell, and others.

Mark Foster is an only child of his parents

Born in 1984 in Milpitas, California, Foster is currently 37 years of age — nine years older than his wife, who was born on February 1, 1994. He celebrates his birthday every year on February 29. His zodiac sign is Pisces.

Although born in California, he was mostly raised in the suburbs of Cleveland, Ohio. His father’s name is Daniel Foster, and his mother’s name is Kathleen Foster. He is the only child of his parents and doesn’t have any siblings.

Foster was interested in music from an early age and used to play drums, piano, and guitar. As a child, he used to participate in the Cleveland Orchestra Children’s Chorus. Growing up, he used to play in garage bands.

As for his education, he attended Nordonia High School in Macedonia, Ohio, and graduated in 2002. Furthermore, Foster stands at a towering height of 5 feet 9 inches or 1.75 meters.

The Dirty John actress met her musician husband in 2013 during the Sundance Film Festival, outside of the Eccles Theater.

In their first-ever conversation, they realized that they had something in common — Garner’s grandmother used to live in the same town, just outside of Cleveland, that Foster’s father lives in.

Following that first-ever meet, they started meeting each other in Cleveland during Christmas time. “It kind of became a tradition,” the actress said in an interview with Vogue in 2020.

Although they had known each other since 2013, they officially began dating only around June 2018. And just ten months later, in April 2019, Foster went down on one knee and proposed to Garner.

Both of them were on a road trip up to Montana during that time. As Garner told Vogue, they were in Flathead Lake when Foster woke her up in the morning with a coffee, took her for a walk, read her a poem written for her only, and finally proposed to her.

Her words were, “He read me a poem he had written to me, and when he finished, he dropped to a knee and asked me to marry him.” She said yes, and they got engaged. After accepting Foster’s proposal, they went to Yellowstone and camped under the stars.

“It was surreal and beautiful,” Garner further added.

For their wedding, they had two plans: either to have a big wedding or a Vegas elopement. They eventually settled down in the middle and decided to walk down the aisle at New York’s City Hall — the same place where Garner’s parents married 41 years ago.

On December 27, 2019, Garner and Foster shared their wedding vows. Only the couple’s immediate family members were there to witness the ceremony. Additionally, the wedding wasn’t planned by a wedding planner.

Instead, the married couple and Garner’s mother worked on all of the organizing, and their friends helped in other processes. On her special day, the bride donned a white dress whereas the groom went with a black tuxedo and a black tie.

Julia Garner and her husband Mark Foster at their wedding. (Photo: Andy Barron)

The musician had prepared a special surprise song, Lovers in a Stream, for his wedding, and the guests were the first people to hear it. “It was a surprise. Mark wrote, produced, and sang it. It was very surreal and the most beautiful present I’ve ever received,” Warner told Vogue.

Right after their wedding, the newlyweds had to go on to work and had a very busy schedule for some time. However, the pandemic shut down all of that, which was a blessing in disguise for them.

In an interview with WSJ Magazine in November 2020, Garner said, “Honestly, it’s been great. We were both going to be super busy after we just got married. Now I understand why people have to have honeymoons.”

Continuing her statement, she said, “We were just going to go straight to work, but we got time together at home. We had a really nice, really long honeymoon.”

Since their marriage, the married couple has been relishing every moment they spend alongside each other. However, as they tend to maintain some privacy around their marriage life, they keep everything low-key.

Recently, on December 27, 2021, Garner and Foster completed two years of their marriage. On that special day, the actress took to her Instagram handle to share a picture with her husband. “2 years today 🤍,” she captioned the image.

Going by all of that, it seems like the couple waited for a long time before dating each other and eventually tying the knots. And now, they have a blissful marital relationship filled with love.

How Much Is Shaun White's Net Worth? Here's Everything You Need to Know

How Can You Choose the Right Kratom Strain for Your Needs?