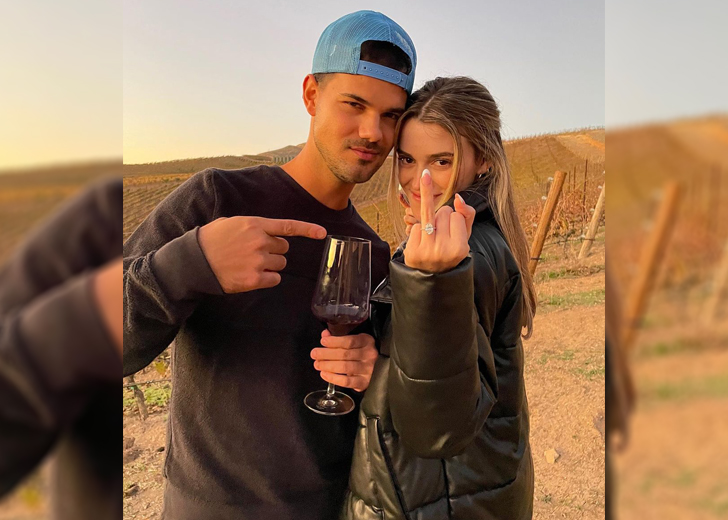 Taylor Lautner has earned a lot of popularity thanks to his acting performances in movies like Twilight, Abduction, Cuckoo, and more.

However, his personal life affairs, especially with Taylor Swift, have also been one of the topics that have provided him quite the fame. Due to the same reason, many people have been wondering what his present relationship status is – and if he is married to a wife or not.

Taylor Lautner Recently Got Engaged to His Girlfriend Tay Dome

The American actor is yet to share the wedding vows and have a wife. However, it might change soon as he recently got engaged to his long-time girlfriend Tay Dome, a California native registered nurse.

On Saturday, November 13, 2021, Lautner announced on Instagram that he got engaged to the love of his life on November 11. He shared a couple of pictures in which he was seen down on one knee, proposing to his partner.

On the same day, the actor’s now-fiancé also shared the same picture and captioned it, “my absolute best friend. I CANNOT WAIT TO SPEND FOREVER WITH YOU.”

A day after sharing the engagement news, November 14, Lautner took to his Instagram handle to share some new pictures alongside his beau. In those pictures, the two were seen on a country farm.

Lautner was holding a glass of wine whereas Dome flaunted her engagement ring. As per reports from People, Dome’s engagement ring is a custom-designed oval cut diamond from Ring Concierge.

Coming over to the newly engaged duo’s relationship, they began dating each other in mid-2018. Initially, they kept things low-key but eventually began flaunting pictures alongside each other, making things official.

Since they began dating, the two have been relishing their days alongside each other. And, it seems they will stay together forever and might even get married soon, as they have already taken the next step and got engaged.

Before being engaged to his present partner, the Scream Queens star was in various relationships in the past.

As per reports, his first-ever girlfriend’s name is Sara Hicks. They were dating each other even before Lauter gained fame. Currently, there are not many details about their relationship.

In early 2009, he was in a short-term relationship with Selena Gomez. They got to know each other while they were in Canada, filming their respective movies. They eventually got close but decided to end things after a few months.

Later, in October 2009, Lautner began dating Taylor Swift. They first met each other on the set of the movie Valentine’s Day. However, their togetherness didn’t last long and they parted ways a month later in December 2009.

Following his split with Swift, the American singer-songwriter wrote a song titled Back to December, dedicating it to Lautner.

Around a year later, in November 2010, the actor began dating his Abduction co-star Lily Collins. Much like his previous relationships, this also didn’t work out and they broke up in September 2011.

Afterward, it was rumored that Lautner was dating American actress Maika Monroe. But, nothing was confirmed. Soon, the speculations faded away when he began dating his Tracers co-star Marie Avgeropoulos.

Their relationship began in 2013 and it ended two years later in 2015. Though the reason behind their split was unknown, an insider had mentioned to E! News that “It was completely amicable.”

Lautner’s habit of dating his co-star continued again as he started dating his Scream Queens co-star Billie Lourd in December 2016. This relationship also didn’t work out very well as they ended things in July 2017.

After his split with Lourd, he stayed single for a while until 2018 when he began dating his now-fiancé, Tay Dome. And, considering Lautner’s past dating history, his current relationship might last for a long time.