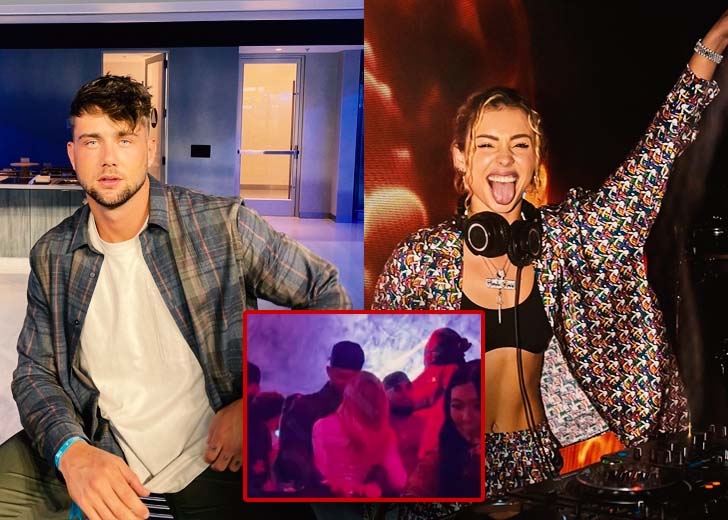 There seems to be a new couple brewing in the town and they are Harry Jowsey and Charly Jordan.

The YouTuber/actor was seen locking lips with the musician/TikTok star during a party held on the occasion of the NFL 2022 Super Bowl LVI finals on February 13, 2022.

The video of them kissing was shared by the Instagram handle, tiktokinsiders. In the video, they were initially dancing by wrapping each other’s hands on their waist. Soon, Jowsey and Jordan locked lips and then continued with their dance.

It seems like Jowsey noticed the post after some hours as he took to the comment section and wrote, “Someone check on that dude who fell pls.” His comment was related to a man in the video who had fallen down whilst dancing.

Besides that comment, the actor didn’t say anything about his kiss with Jordan. And neither has Jordan said anything about it. So, people are wondering if the two are together or it’s just a one-time thing.

As of this writing, nothing has been confirmed if they are dating each other. The video was posted less than a day ago and neither of them has addressed anything about it. So, we might have to wait for some time before they make their relationship official — if it’s serious.

A couple of hours before their kissing video was posted, Jowsey had shared an Instagram reel with Jordan. The first part of the video showed him in his bed presumably getting ready for the party.

As the video transitioned, it showed him in a place filled with several people. Jordan was alongside him as she did some dance steps.

Both Harry Jowsey and Charly Jordan were dating someone else

Before the talks of their possible relationship started after the video was posted, both Jowsey and Jordan were dating someone else.

Speaking of Jowsey, his last relationship was with the Russian model Sveta Bilyalova. The now-former couple began dating sometime around late 2021 and were seen together in early January 2022.

However, it now seems like they have broken up. Nonetheless, there are still some pictures shared alongside Bilyalova that are left on his Instagram handle.

Coming over to Charly Jordan, she was in a relationship with TikTok star Tayler Holder. They began dating in October 2020, however, their togetherness didn’t last long. In March 2021, they announced their breakup.

Following their breakup, both of them provided separate opinions on why they split and there was quite bad blood between them. Due to all that, everyone got surprised when Holder shared a series of pictures alongside Jordon on July 5, 2021.

Besides, Jordan had shared two pictures alongside Holder via her Instagram stories. In the first one, he was seen kissing her cheeks. And in the other one, she had written, “this one’s ok I guess.”

So, many believed that they have reconciled their relationship and are back together. While no answer was given at that moment, the two continued to be seen together in public and featuring each other on their Instagram handles.

However, all of that didn’t mean that they were together. On September 25, 2021, Jordan was asked by The Hollywood Fix if she was back together with Holder to which she replied with a big “No.”

She further claimed that she was single at the moment.