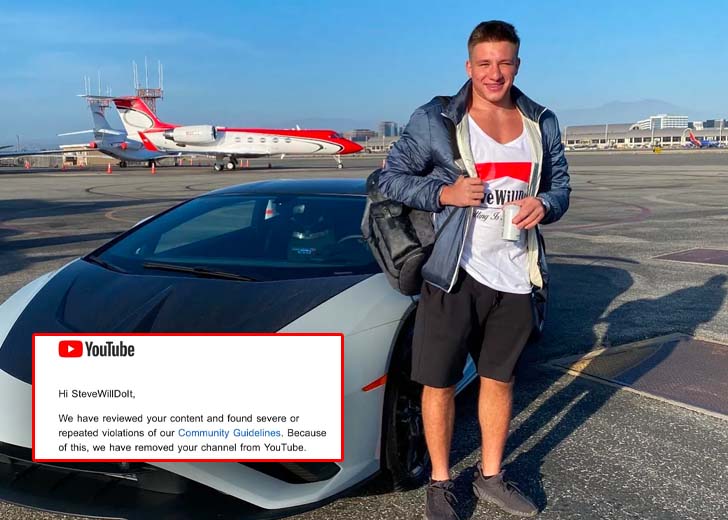 Stephen Deleonardis, aka SteveWillDoIt, received a permanent ban from YouTube!

Nowadays, many YouTube channels are receiving a permanent ban on their channel. On August 1, 2022, SteveWillDoIt became one of them.

He is best known for his absurd challenge videos and the stunts he performed in them. Most of his videos went viral because of their nature.

Initially, he started on Instagram in May 2017. But by 2019, he shifted his attention to YouTube and began posting his videos on the platform.

In a couple of years, he amassed over 4 million subscribers on his channel. But it seems like his journey on YouTube has ended.

This is not because Delonardis voluntarily chose to end his career on YouTube. But instead, the platform banned him permanently and deleted the channel.

The email said that YouTube had reviewed his channel’s content and found “severe or repeated violations of our Community Guidelines.”

As a result, they deleted his channel and placed a permanent ban on it. This means that the SteveWillDoIt channel does not exist on YouTube anymore.

The platform empathized with the social media personality and said the news was “probably very upsetting.” However, they clarified the main reason they took such action was to make YouTube a safe place for all.

They revealed that they took the SteveWillDoIt channel “to protect other users on the platform.” They said Delonardis had the right to appeal to YouTube if he believed they made the wrong decision.

Delonardis posted the screenshot with the caption, “Youtube just permanently deleted my channel.”

This is not the first time Delonardis has faced such issues. Back in June 2022, he tweeted to YouTube that his channel was terminated even though he did not break any platform guidelines.

YouTube tweeted back to him, saying if the channel was terminated, he should have received an email with more details about the ban.

It seems like the issue was clarified since Delonardis had his YouTube and was posting videos regularly.

Another problem Delonardis once had with YouTube was in January 2022. Many views disappeared from his channel after some videos were deleted from them.

However, Delonardis did not reveal if it was he who removed them or YouTube.

After Delonardis posted about the permanent ban he received, many of his fans and followers spoke up for him. They commented on his Instagram and tweeted at YouTube, scolding the platform for its decision.

Since the post, Delonardis has not revealed anything about his ban. He has not said if he reached out to YouTube or if he has appealed the ban.

Similarly, YouTube has not publicly released any statement about deleting Delonardis’ channel even though most people have tagged and tweeted at the platform.

Why Is Music Important In Online Casino Gaming