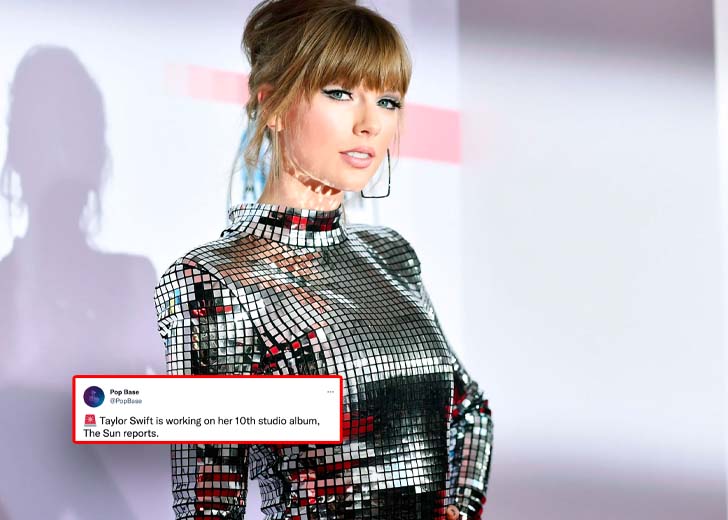 “Taylor is enjoying the process of tinkering with new sounds and is set to showcase a range of genres on her next album,” an insider told The Sun.

Taylor Swift’s new album is on the way after two years.

The ‘Love Story’ singer is rumored to have her new album coming up, as she is reportedly working on her 10th album.

For the last couple of weeks, she has been active in writing and recording the songs in her hometown Nashville, Tennessee.

Folklore and Evermore were the eighth and the ninth studio albums of the artist where she referenced her ex-boyfriends Harry Styles and Jake Gyllenhaal, but the TS10 will give a closer look at her current romance.

Fans were taken by shocked when The Sun confirmed that Swift is working on TS10. Imagine what the reactions of the fans will be when the album actually gets released.

Swift’s fans were treated to new music from her two years ago in 2020 with two albums and re-recordings. She has now finally decided to work on new music and described, “to put it plainly, we just could not stop writing songs.”

“Taylor is enjoying the process of tinkering with new sounds and is set to showcase a range of genres on her next album,” said an insider while talking with The Sun.

Further, the insider explained that Swift invited some of her friends to write with her, and the songs that they came up with reminded her team of Stevie Nicks and Joan Armatrading.

The singer is eager to work with rising female artists as well as producers. Hence, it will be her most collaborative album so far. Her admirers have heard about her break-ups, but the upcoming album will give a fresh take on her romance with actor Joe Alwyn.

After surprising her fans with Folklore and Evermore in 2020, she got busy re-recording and re-releasing two albums, Fearless and Red. Both her 2020 albums and re-recordings were ranked among the 10 best-selling albums of the year.

Fans speculate TS10 will be ‘Karma’

Superfans of the singer believe that Swift might have an album named Karma. It was written and recorded years ago, but the whole dispute with Kanye West during the MTV Video Music Awards changed the whole thing upside down, inspiring her for Reputation.

The die-hard fans still believe that Karma exists and was kept in a safe place somewhere for a long time, and now they are hoping that it will be released. Many admirers on Twitter have strong feelings that the TS10 will be Karma.

One of the fans wrote on Twitter, “if ts10 is really next and is a rock album I definitely think it’s karma, she was not on the man wall for nothing.”

Since Swift is busy filming a new movie titled Amsterdam directed by David O. Russell, as per Forbes, it might be a perfect time to drop Karma to give followers something new to listen to and break up her re-release schedule.