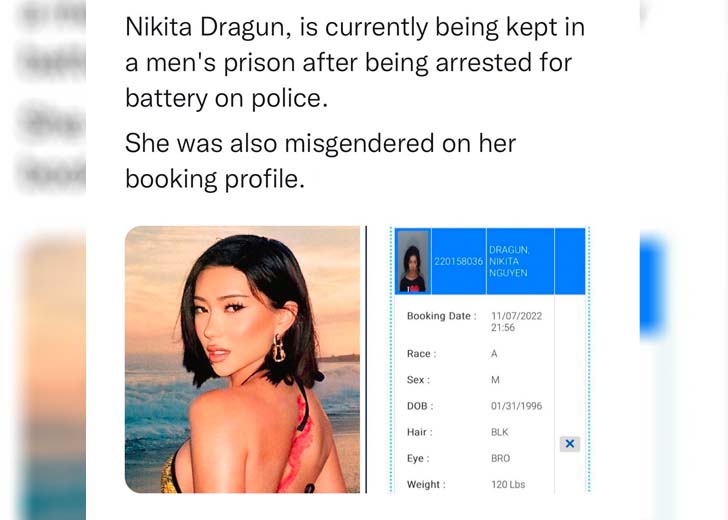 According to Nikita Dragun’s representative, she was kept in a male-only unit while at the Miami-based Turner Guilford Knight Correctional Center.

Transgender make-up artist and YouTuber Nikita Dragun was freed from custody in Miami on Wednesday, per her agent and Miami-Dade County court documents. The 26-year-old Dragun was detained on Monday at a motel and accused of felony assault on a police officer.

Dragun is well-known online for her style, beauty, and information relating to her transition. She has 27 million YouTube, Instagram, and TikTok subscribers.

The YouTuber’s representative said that while at the Turner Guilford Knight Correctional Center in Miami, she was housed in a male-only section.

As per Jack Ketsoyan of Full Scope Public Relations, the scenario with Dragun, legally “female,” housed in a men’s unit in a Florida jail is “extremely disturbing and dangerous.”

He continued, “This decision made by the Miami-Dade County Corrections Department directly violates their protocol, which mandates that transgender inmates are classified and housed based on safety needs and gender identity.”

Ketsoyan also said that the influencer has been released and is now safe and thanked her fans for respecting her privacy during this time.

According to Miami-Dade County records, Dragun was freed on recognizance, which meant that she was not required to make bail. The Miami court hearing for her arraignment is set for December 7.

It appeared that she was having too much fun when the transgender influencer was detained Monday night, November 7, 2022, at The Goodtime Hotel on a felony charge of assault against a police officer.

According to the police report obtained by TMZ, officers were summoned in response to a tip that someone was behaving extremely boisterously and making a disturbance at the hotel.

Police claimed that the hotel security told them that the artist had been causing a disturbance and wandering the pool area naked for a significant amount of time when they arrived.

Officers said security reportedly told them Dragun poured water on hotel employees on purpose and disobeyed orders to stop causing the disturbance. As a result, she was charged with misdemeanor battery and misdemeanor disorderly conduct.

A study by NBC News in 2020 revealed that the majority of transgender people are imprisoned in accordance with the sex to which they were born, placing them at risk of being raped, sexually assaulted, and mistreated.

The police department stated that Dragun “appears as a female but would like to be recognized as a male” in the arrest affidavit. She is identified as a man in the affidavit, and “he” and “him” are used throughout the report.

Dragun is also identified as a man on the prisoner profile from the facility where she was detained. Since starting her transition in 2015, Dragun has used “she” and “her” pronouns while referring to herself online.

People were horrified when they learned about Dragun’s circumstances and how she had been misgendered and imprisoned in the men’s ward.

A Twitter user wrote, “THE MENS UNIT ? Hate her as much as you want but she is still a woman and has the right to be in the same care.”

Similarly, a supporter expressed worry on Twitter and said, “Genuinely scared for her and would not be surprised if something happened almost immediately upon her arrival to the men’s jail.”