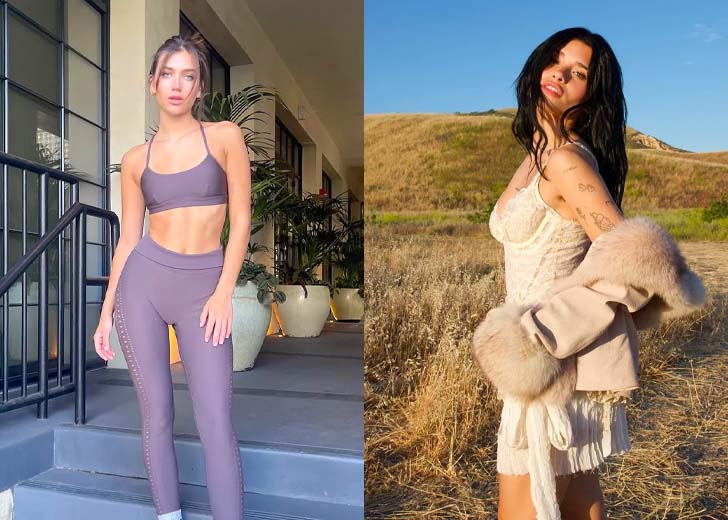 Are the two friends turned enemies getting back on good terms?

Mads Lewis and Nessa Barrett are headlining the tea news again, but not due to their rift.

In fact, it now seems like they are getting back on good terms. And it can be said so because Lewis has started following Barrett on Instagram.

And fans were quite excited that the former friends might be getting back together, putting aside all the past bad blood. One even commented, “I hope they would bring back the friendship. Love Mads.”

While on the other hand, some Instagram users didn’t like the tea. “It shouldn’t matter to y’all if she wants to rekindle her friendship with Nessa,” one user wrote.

However, there were more positive comments than negative ones. And those fans might be happy to hear that this isn’t the first approach that Lewis has shown towards her former friend.

When the late TikTok star Cooper Noriega passed away on June 9, 2022, the whole TikTok community was grieving. And as Nessa was one of the closest people to Noriega, it was tough for her to cope with his death.

Later, when Barrett was finally able to share tributes to her fallen angel, her post was liked by Lewis. Moreover, when Barrett posted that her first song, ‘Die First’ from her upcoming album, was a direct tribute to Noriega, Lewis also liked that post.

This hinted that Lewis might have been in contact with Barrett privately. Furthermore, on what would be Noriega’s 20th birthday on June 28, 2022, Barrett posted a few pictures with her late best friend and wrote a short but sweet caption.

And like previous times, the post was again liked by Lewis. At the time, the tea page, TikTok Insiders, shared a screenshot of a message they had received, probably from a fan or from a source close to either Lewis or Barrett.

The message read, “totally not tea especially given the occasion, but I found so comforting the fact that Mads liked Nessa’s post about Cooper’s bday. In the end, I believe he would have wanted everyone to move in from the past and live in harmony with one another….”

“…because we don’t know when we are going to lose someone regardless of any differences they had in the past.” “Leaving the middle school drama behind and focusing on what’s important is what matters,” one fan added in the comment section.

As of this writing, it’s unclear what’s happening between Lewis and Barrett in private, as no details are shared. The two aren’t spotted together, and Barrett also hasn’t followed back Lewis.

Mads Lewis with Nessa Barrett while they were friends (Photo: Instagram)

But it all changed after Barrett and Hossler worked together on their song ‘La Di Die.’ Months later, Lewis unfollowed Hossler, and it was later revealed that the couple had broken up and Hossler was dating Barrett — the confirmation came in April 2021.

When Lewis discovered that her then-boyfriend and best friend were together, she posted a video using pictures of her, Hossler, and Barrett with Taylor Swift’s ‘Better Than Revenge’ as the background song. The post implied that Barrett took Hossler “faster than you can say sabotage.”

Later Lewis said, “I was never jealous of a song nor jealous of her [Nessa]. I know Ness better than anyone, and she knows exactly why I posted this video, and that’s all that matters.”

Later Barrett finally responded via a series of Twitter posts. And as many thought, their online fight went back and forth for weeks. Barrett’s on-and-off boyfriend of several years, Josh Richards, also got involved in the drama.

The drama continued until January 2022 when Lewis appeared in the reality show Famous, Like Me and said Barrett became friends with famous people for fame. Barrett’s fans trolled Lewis for her statements, and Tana Mongeau even defended Barrett.

And while Barrett seemed to respond to those statements via a TikTok video, it’s unknown if it was a response to Lewis. Following that, the drama between the former friends lessened, and it seems things have changed completely considering the recent turn of events.