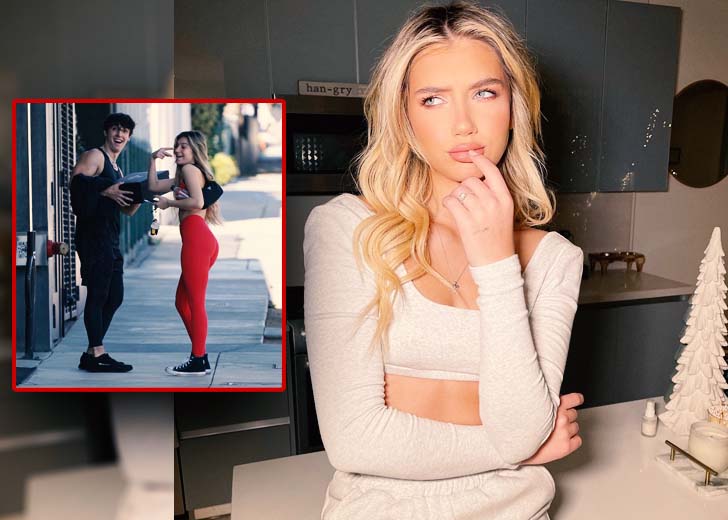 It’s been some whirlwind of days for several internet influencers and TikTok stars.

Some are getting unfollowed by their friends on Instagram, whereas some are getting slammed by fans, perhaps, for getting too close with one’s boyfriend.

While all of that is going on, there has been one news flash that alleged that TikTok stars Mads Lewis and Bryce Hall are the new couple in the town. But, how true is this news?

On Thursday, February 10, 2022, a paparazzi who goes by the username of @pap.galore on Instagram posted a couple of snaps of Lewis and Hall right after they did some exercises and walked out of the gym.

When they were outside the gym, the fellow TikTok stars had a chat and shared some laughs, as seen in those pictures. In the caption of that post, the paparazzi first wrote, “NEW COUPLE ALERT??”

Then, they claimed that Lewis and Hall were “seen flirting outside dogpound after working out together.”

Mads Lewis and Bryce Hall respond to the post

After the paparazzi posted those pictures with the caption, Lewis seems to have noticed the piece immediately. Just some minutes later, she responded to the post and wrote a comment — which now appears to be deleted.

She mentioned that she didn’t want to take pictures with the paparazzi just after working out, and now this is the photo and caption he [paparazzi] put out. She then claimed that the news of her dating Hall was false.

Her exact words were, “Wow since I didn’t want to take pictures with you after working out. This is the caption. So false.”

In the end, the paparazzi made a comment and said that it was a joke and Lewis and Hall aren’t dating. They had written, “It was a joke guys. There [sic] obviously not dating.”

When the post was made, fans of Lewis and Hall were quick to defend their favorite TikTok stars and slam the paparazzi for their misleading post.

One fan had written, “No. They’re just friends stop it.”

Similarly, another Instagram user had mentioned the paparazzi’s Instagram handle and wrote, “why you always invade people’s space. Joke or not. One day your gonna get slapped.”

Additionally, one made fun of how the internet or paparazzi interpret things. They had written, “A boy and girl stand next to each other. Everyone: Omg they’re dating.”

Furthermore, there were several more fans of the two TikTok stars who mentioned that Lewis and Hall are only friends and they have a brother-sister type of friendship.

Well, to conclude, Lewis and Hall aren’t dating each other, and it was just a joke made by the paparazzi.

How Much Is Shaun White's Net Worth? Here's Everything You Need to Know