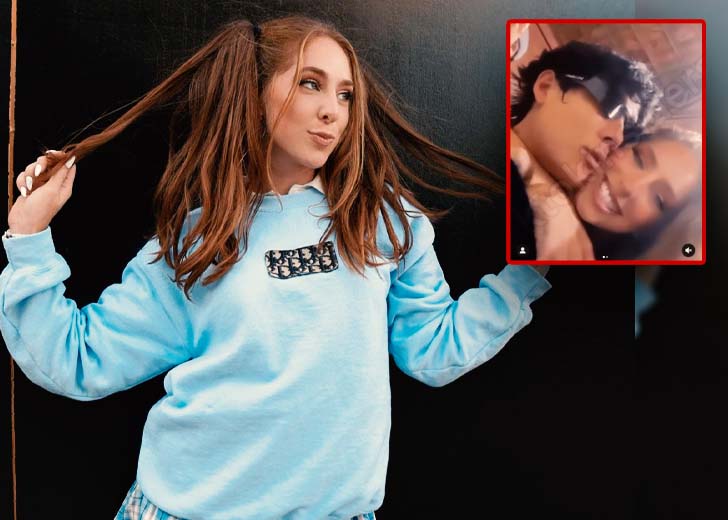 Jaden Hossler became one year older on Wednesday, February 9, 2022, as he celebrated his 21st birthday.

The American singer and TikTok star had hosted quite the party, which was attended by his girlfriend, Nessa Barrett, and several friends and influencers. Among those influencers, one was Karin Moskalensky.

When Moskalensky was still at the party, she took a video with the birthday boy and later shared it via her Instagram handle. In the video, she could be seen leaning on Hossler’s back as they shared some laughs and kept their heads very close to each other’s.

When Moskalensky posted the video, several fans of Hossler and his girlfriend, Barrett, began slamming Moskalensky for being closer to Hossler, who already has a girlfriend. Some also claimed that she was disrespecting Hossler’s relationship with Barrett.

The Instagram influencer soon deleted the video. However, some fans continued to slam her by dropping hate comments on Moskalensky’s other Instagram posts, mainly on her post of November 27, 2021.

Similarly, another user took to the comment section and wrote, “Why is she called an influencer? This world doesn’t even know u are. I say both of them should’ve respected her Bc he has a girl and Jaden Bc his girl was there if that even makes sense.”

Furthermore, there were some other Instagram users who chimed in and said that Moskalensky should not be entirely blamed. For instance, one fan had commented, “respect Nessa, bro,” to which another user replied with, “Isn’t Jaden supposed to be the one who should respect her?”

Another user joined in the same comment thread and wrote, “y’all are blaming her [Moskalensky] without blaming Jaden? F’ed in the head.”

Jaden Hossler responds to the backlash

After the backlashes started pouring out, Hossler thought it was best not to ignore it and respond to it.

He took to his Instagram handle and put up two stories. Both of those stories had a head-shot type of picture of him, and he had written what he had to say over it.

In the first story, he mentioned that he took many pictures and videos with numerous people on his birthday night. He added that the party was held in a warehouse, and several people were there and took videos.

Jaden Hossler replies back to the backlashes. (Photo: Instagram / jadenhossler)

He then asked people to “Please Chill” as they know nothing, and it’s annoying. “People want drama so bad. [expletive] the media. Everyone had a great night and there were no problems. Thank you all again,” wrote in the end.

The second Instagram story was the same type as the first one, but in that one, he had only written, “Weirdos.” Perhaps he was mocking those who were slamming him and Moskalensky.

As of this writing, Moskalensky hasn’t given any comments on the topic and continues to remain silent.

Posted on November 21, 2022November 21, 2022
Jordan Beckham expressed her apologies for uttering n-word, but she swiftly deleted the statement after further backlash.
Read More